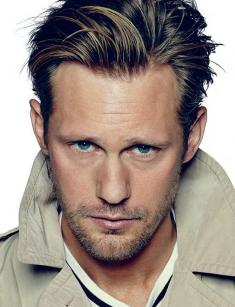 Alexander Skarsgård is a Swedish actor and director who became world-famous after participating in the vampire saga True Blood. The actor also portrayed the title character in one of the most popular films of 2016, The Legend of Tarzan.

Alexander Skarsgård was born in the capital of Sweden in 1976. Alexander’s mother My Skarsgård worked as a doctor, and his father Stellan Skarsgård was a popular actor in his native country. Alexander became the couple's first child, and then more children appeared in the family. The actor has seven siblings: one sister and six brothers. By the way, two of them, Gustaf Skarsgård and Bill Skarsgård, also play in films.

Alexander made his acting debut at the age of 8. The first work of Alexander Skarsgård was the children’s film Åke och hans värld (Åke and His World). Then there were many similar movies, and the family drama Hunden som log (The Dog That Smiled) is worth mentioning. In 1989, the young actor decided to have a career break.

The boy became a popular child actor, but when Skarsgård was 15 years old, the young man was tired of his popularity and felt uncomfortable with being recognized on the streets. The teenager quitted an acting career and decided to study architecture. However, as a result, Alexander received higher education in another specialty, namely in political science.

After college, the young man applied to do his national service and at the age of 19 went to serve in the Swedish military in the SäkJakt ("protect and hunt") unit that dealt with anti-sabotage and anti-terrorism in the Stockholm archipelago. The army allowed Skarsgård to rethink his life. He realized that to quit his career was a mistake. Therefore, after completing his service, Alexander decided to restart his career, but this time, he took it seriously. The young man went to England, where he got rid of his Swedish accent and improved an English pronunciation at Leeds Beckett University and also studied drama. As a result, Alexander was awarded a Doctor of Arts degree.

The next step was New York City, where he enrolled in a theater course at excellent Marymount Manhattan College. Alexander could have made it into Hollywood, but for family reasons, he was forced to return to Sweden, where he began to act in feature films, as well as appear in television series.

After ten years, Alexander returned to the Swedish cinema with the help of the melodrama Happy End. At homeland, the actor starred in such projects as the thriller The Diver, the romantic film Wings of Glass and the family saga Kites Over Helsinki. The famous movie of that period is Othman Karim’s drama Om Sara (About Sara), for which the actor received an award at the Moscow International Film Festival.

The first American film in Skarsgård’s career was the comedy Zoolander. He got the role of a strange guy, working as a model. Alexander rose to fame after the release of the war drama Generation Kill, and the fantasy TV series True Blood made him popular all over the world. In this multi-part film, he plays vampire Eric Northman, the owner of the vampire bar called "Fangtasia."The actor also appeared in the music video for singer Lady Gaga’s song "Paparazzi."

Alexander Skarsgård played a lot of starring roles in the following projects, including the thriller Straw Dogs, the melodrama What Maisie Knew, the fairytale film Melancholia, the horror film Hidden and the unique family story The Diary of a Teenage Girl.

In 2016, the comedy War on Everyone and the anticipated adventure movie The Legend of Tarzan were released. Alexander Skarsgård’s partner on the set was model and actress Margot Robbie.

It is not the first time directors screen the famous series of novels about Tarzana, a man brought up by monkeys, by Edgar Rice Burroughs. But most of these adaptations focus on Tarzan’s childhood, the wild man’s acquaintance with people and civilization.

The film The Legend of Tarzan shows that the man once called "Tarzan," John Clayton III, has settled down in London and lives the ordinary life of a noble Briton with his wife, Jane. But the intrigues and financial frauds of the antagonists of the film force Tarzan to go back into the jungle, and Alexander Skarsgård’s fans have an opportunity to see the actor wearing a loincloth. The actor has a rather unusual and lean body. Alexander admitted in an interview that his weight was 189.59 lbs. (86 kg) with a height of 6.36 ft. (194 cm).

Alexander Skarsgård is not married and has no wife or kids, although he has had a lot of famous love affairs. In his native Sweden, he had a long-lasting, serious relationship with a young woman, and the actor even returned home after studying in New York City. But when the lovers broke up, Alexander left for the USA again and began to date one girlfriend after another.

Actress and singer Amanda Seyfried became the first woman among Skarsgård’s numerous girlfriends. Later, he dated model Izabella Miko, the star of the action movie Clash of the Titans. The actor had a short love affair with Evan Rachel Wood, the partner on the TV series True Blood.

The press also speculated on his relationship with actress Nina Dobrev, the star of another vampire TV series The Vampire Diaries, when the photo appeared on the Internet depicting the actress together with Alexander Skarsgård and Michael McMillian, Skarsgård’s partner in True Blood. This photo provoked a wave of rumors, but later it turned out that Nina and Michael were good friends, but the woman did not communicate with Alexander very much.

Then Alexander fell in love. Famous actress Kate Bosworth could swell the head of the Swedish ladies' man. They dated for more than two years, and the reasons for their breakup are unknown, but much later, Alexander confessed that it was a mistake to let her go.

Then the media wrote about the actor’s relationship with Elizabeth Olsen, one of the famous sisters, and with the popular singer Rihanna, as well as with young actress Ellen Page, and mature beautiful Charlize Theron. Since 2015, Alexander Skarsgård has had a serious relationship with the British TV presenter and photo model, Alexa Chung.

The actor is known as an ardent fan of Swedish football. He supports the Swedish club, Hammarby Fotboll, and even provided financial assistance to this team. The man has also attracted people’s attention to their matches participating in various campaigns and signed autographs at the stadium.

There are many Instagram pages with the username Alexander Skarsgård, but they are not marked as verified. So, the accounts were most likely created by the actor’s fans.

In the summer of 2017, the actor’s female fans found out the good news that the heart of Alexander Skarsgård was free again. The actor broke up with Alexa Chung after two years of relationship. Moreover, the couple’s friends told the press that the actor and TV presenter ended their relationship in May 2017.

Alexander Skarsgård’s acting career also continues to attract the attention of fans. In 2017, the actor starred in the HBO drama series Big Little Lies. Skarsgård won the Emmy Award for Outstanding Supporting Actor in a Limited Series or Television Movie for his role in this television series.

Alexander Skarsgård has recently said that he has no problem with nudity or sex scenes onscreen and has proved it, shooting in Big Little Lies and True Blood.

At the Emmy Awards ceremony, Nicole Kidman, who portrayed the wife of Skarsgård’s hero in Big Little Lies, kissed Alexander on the lips after he won an Emmy. Nicole congratulated her colleague in such a strange way, and the woman was not embarrassed at all that she had kissed a man in front of her husband.

Alexander Skarsgård has a net worth of $12 million.