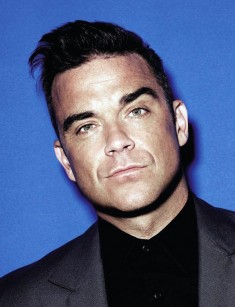 Robbie Williams has been one of the music chart leaders for many years. However, the man stands out not only for his musical achievements but also for his kind character, bonny appearance, and endless love for his fans.

Robbie was born in the provincial town Stoke-on-Trent in Great Britain. The father was an actor; the mother was a florist. The three-year-old boy and his step-sister had to face family problems: the parents divorced, and the children stayed with the mother.

Young Mr. Williams liked to fool around, so he had many problems with his studies. At primary and secondary school, he earned the reputation of a bummer and idler; when Robbie wanted a girl from his class to like him, he risked it and engaged himself in problem situations. It was difficult for the mother to control the child’s defiance, but Robbie rarely thought of that, just like any teenager.

Robbie got his first experience at the auditions for the local music group Take That. The young people were looking for the fifth member and, to Williams’s surprise, he was accepted after he performed “Nothing Can Divide Us” by Jason Donovan.

For the next five years, Robbie was the member of the group and gave concerts with his colleagues at town pubs. Initially, Take That sang famous hits; in 1991, the first album was released. It not only gained popularity but also became the ticket to the world of show business.

For several years in a row, the album Take That and Party was considered to be the best in the history of British music business. In a couple of years, the second collection of hits Everything Change was presented. The repeated success was exhilarating for the young men; in 1994, they decided to tour around the country and gave live concerts.

Numerous shows, crowds of fans, and social recognition were attractive and tempting, but Robbie wanted to change something after the third album came out.

Every musician probably dreams of solo performances. Still, Williams’s case was peculiar: according to the contract with BMG, Robbie could not make a solo career if he decided to break up with the group. For several weeks, Robbie was undergoing legal procedures with the company’s representatives. At that time, the musician chose the wrong path: he started taking alcohol and drugs.

As soon as the case was closed, the singer had his first solo song released: it was the cover of George Michael’s work. Later, Robbie recorded the debuting solo album; those tracks did not attract much attention, but the success followed soon when the artist’s hit “Angels” came out.

Not every musician or actor achieves as much as Robbie Williams. “Angels” brought him the title of the best song of the past 25 years according to the Brit Awards. “Millennium” was the next hit which won several awards as the song of the year, best single of the year, and best visual technologies in a music video.

After the singer conquered his home country and Europe, he did not limit himself; in 1999, right after he had signed the agreement with Capitol Records, Robbie started working on the album whose target audience was American.

The first attempt was a disaster: “The Ego Has Landed” placed 63rd in American charts. The next time, the things improved: “Rock DJ” gained many international awards, and the musician’s career took off.

In 2000, Robbie Williams and Kylie Minogue recorded the song “Kids” created by Robbie himself. The next year, the artist went touring to support his third studio album Sing When You’re Winning; at the same time, he was working on the material for the next project. The first single from the fourth album “Somethin’ Stupid” was created together with Nicole Kidman. In six European countries and New Zealand, the song topped music charts.

Robbie William’s discography was updated annually. Williams signed the $105 million agreement with EMI: it was the recording sum in the history of the British pop music.

2005 was marked with several significant events: Robbie got the MTV Europe Music Award as the “best male” singer. He was also included in the Guinness Book of Records for his unbelievable achievement: more than 1.5 million tickets for his concert were bought in the first day after the beginning of the sales.

In 2010, the musician reached the anniversary: 20 years of the music career. In honor of this memorable date, the singer had the collection of best songs “In and Out of Consciousness: The Greatest Hits 1990-2010” released. There were two package formats: standard and gift. The collection immediately topped European charts; Robbie Williams became the most successful British singer. Only The Beatles, Elvis Presley, U2, and Madonna surpassed him.

For his work in show business, Robbie received the BRIT Award; his name went down in the history of the British and world’s music.

Russia has always attracted the attention of foreign stars, and Robbie Williams is not an exception. In 2015, the artist was touring in Moscow and appeared in Ivan Urgant’s comedy show where he performed several songs with his musicians.

In 2016, Williams presented his new project “Party Like a Russian” where Robbie created the image of a modern Rasputin. This single was aimed at laughing at Russian oligarchs who bought cars and transported them on board their planes.

The singer touched upon a sensitive subject: the social inequality had already caused many public scandals and uncovered facts. By the way, not only Russians but people all over the world are interested in this sphere. Perhaps, Robbie wanted not only to present a new single but also draw public attention to ordinary people’s problems and compare their status with that of the high-ranked.

Others believe the singer wanted to attract attention which was fading away. After “Party Like a Russian” came out, Russian show business representatives noticed the star. Andrey Malakhov, the popular TV personality, invited Robbie to his show; the program was recorded in London. Malakhov and Williams talked on various subjects. The video was shared on the Internet; it was the second sensational episode for Andrey Malakhov after his meeting with the Hollywood actress Lindsay Lohan.

In 2017, Robbie Williams was one of the guests at the program “Let Them Talk.” The British said he could represent Russia at Eurovision-2017 in Kiev. He added he followed the events of the international contest and liked Russian singers; Robbie was impressed by Sergey Lazarev’s show.

From the very beginning of his career, Robbie kept holding journalists’ interest by creating the image of an audacious gay, and his lyrics were ambiguous. In 1998, the media discovered Williams had the relationship with Nicole Appleton, the vocalist of the group All Saints.

At that time, Nicole got pregnant and had an abortion. As she told reporters, this decision was made due to the terms of her contract with the group’s investors. Soon, Robbie and Nicole broke up.

After that, the singer was dating Geri Halliwell (Spice Girls) and Cameron Diaz. Still, the affairs were short-term, and the artist’s personal life was not bright. Thus, Robbie decided to choose a different means of meeting women.

In the late 1990s, online dating was only becoming popular. However, the singer met his future wife, the Turkish actress Ayda Field, this way. From 2007 to 2010, the lovers were dating and decided they should marry. In 2012, the couple’s daughter Theodora Rose was born. Two years later, the son Charlton Valentine was born. Today, the singer lives with his family in his mansion in Los Angeles.

According to Robbie, Ayda helps him with everything and makes a positive impact on his rebellious character. Before the musician met the woman, he smoked three packs a day, drank a lot of energy drinks, and poisoned his body. However, Ayda changed his life completely. He emphasizes he has given up smoking and drinking thanks to his beautiful wife and feels he belongs to his current place. The musician believes he and Ayda were meant to be together.

Robbie Williams’s Instagram page is devoted to his work, but he posts family photos sometimes. He often takes pictures shirtless, and his tattooed body is in perfect shape. The man has about 20 tattoos; the first one, a Celtic Cross, appeared on his right thigh at the beginning of his career. Later, he got a lion and words written in the Māori language.

The first letters of his grandparents’ names on his neck and wrists followed. There is the Eye of Horus on Robbie’s neck. To honor his mother, the musician has the gothic-styled phrase “I love u mother.” Overall, the singer is fond of writings: he has tattoos under his collarbone, on lower back, and fingers. There is a flying swallow on Williams’s stomach.

Robbie Williams was the guest star at the opening ceremony of the FIFA World Cup-2018. The star performed in front of 80 thousand people at Luzhniki Stadium and millions of soccer fans. Vladimir Putin, the Crown Prince of Saudi Arabia Mohammad bin Salman, and the FIFA President Gianni Infantino were present in the government loge. The artist was proud to take part in the opening ceremony; he said his “boyhood dream” came true. The Russian opera diva Aida Garifullina also appeared on the stage with the British star.

Before the end of the song “Rock DJ,” the singer impulsively threw a middle finger at the camera and sang “I did this for free” which was not in the song lyrics. Later, the musician explained this action in the program “This Morning” (ITV): there was only one minute left before the beginning of the match between Russia and Saudi Arabia, and Robbie worried he would have no time to finish the song, so he started counting seconds. He realized it was a provocative gesture only when he left the stage. 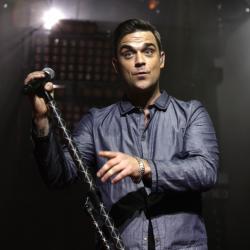