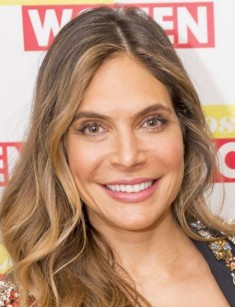 Ayda Field is the woman who turned over a new leaf in the life of Robbie Williams, the former eligible bachelor who had won many women’s hearts. The singer confessed he was speechless when he met Ayda for the first time. Judging by Ayda’s Instagram page, she is a wife and a mother in the first instance, and cinematography is secondary in her life in comparison with her family.

Ayda Field’s full name is Ayda Sabahat Evecan. The name “Ayda” means “the flower growing beside a river; “Field” is the maiden name of the woman’s mother. Ayda’s parents Gwen and Haldun divorced when their daughter was small. The father came back to Turkey and did not communicate with Ayda for almost 20 years.

Just like Jake Gyllenhaal, Ayda graduated from Harvard-Westlake School and entered the University of California where she studied law and politics. The woman’s mother was a producer and worked on many projects, such as the comedy Kid Cop, the horror Wither with Casper Van Dien, and the drama Black Irish with Michael Angarano. Initially, Ayda perceived cinematography only as a viewer; however, as soon as she visited a movie set, she quitted the university and took up acting classes.

Ayda Field’s cinematography consists of TV series, comedies for the most part. Ayda spoke Italian and played the citizen of Salem Angela Moroni in the interminable soap opera Days of Our Lives.

Later on, new projects followed. In the series about four neighbors Will & Grace which became the second most popular sitcom project after Friends, Ayda had a secondary role in an episode. In the comedy drama Studio 60 on the Sunset Strip about the TV backstage, Field got the role of Jeannie, the lover of the former TV show scriptwriter Matt Albie (Matthew Perry).

In 2001, Ayda took the secondary role in the British and French movie The Musketeer produced by her mother. Hugh Dancy, Scott Hickman, Callum Blue, and Antony Strachan starred in the project.

The next project, the adventure comedy Strange Wilderness, told the story of the TV show expedition members who were looking for the Yeti to improve their program’s rating. The travelers had to face a rival. As soon as the hapless characters find the mysterious creature, they kill it from fear. Jonah Hill, Steve Zahn, and Allen Covert played the main characters; Field got the role of a nurse.

The TV theme continued in the series Back to You. The news presenter Kelsey Grammer comes back to his hometown and meets his former colleagues including his ex (Patricia Heaton). Neither the former lover nor his yesterday’s friends are glad to see Kelsey. Ayda Field played the weathercaster Montana Diaz Herrera.

Together with Jason George and Sean Maguire, Ayda starred in the black sitcom Eve; the series was named after the actress and the rapper Eve Jihan Jeffers-Cooper who played the main character.

Ayda’s next project, the series Fresh Meat, was the story about first-year-students’ carefree life: they finally escaped from their parents’ control and stepped into the world of freedom, temptations, and relationship challenges. Ayda played Rosa, the university support officer. It was the American actress’s debut on the British TV.

In the series Loose Women, where Corey Glover and Charlie Sheen starred, the actress made a cameo. In The Exes, the story of three men of different ages and social groups was told; the theme of divorce united them. Their lawyer also had a personal psychological wound. Field’s character was one of the many involved in the three main characters’ adventures.

Ayda and Robbie’s love story began in 2006; the couple met at an actors’ party. Although the new acquaintance was a famous musician, Field did not take this fact seriously. However, the singer’s friends noticed there was some fire in the yesterday’s reveler and womanizer’s eyes. Gradually, Williams got rid of his bad habits; he really wanted to change.

In November 2009, the man proposed to Ayda; thousands of 2Day FM listeners witnessed it. Later, the musician said it was only a joke; nevertheless, in August 2010, the couple married in Beverley Hills.

There were no traditional bachelor and bachelorette parties or petals thrown by guests. Only the relatives and close friends visited the alcohol-free ceremony. Robbie gave Ayda the $130 thousand ring as a present and sang the hit She’s The One for her.

In case of divorce, Field will receive $2.5 million for each year of the family life.

The happy father posted the news about his wife’s pregnancy and the children’s birth on his social network pages with a touch of humor. For a long time, the parents kept the family privacy and did not show Theodora Rose’s and Charlton Valentine’s faces. In 2015, the family moved to a new $32 million mansion in Los Angeles.

In addition to English, Ayda is fluent in Turkish, French, and Italian. The woman is attractive and fit: her weight is 57 kg, and her height is 173 cm.; she regularly exercises and prefers the vegetarian cuisine. By now, Field has never had any plastic surgery.

In 2017, the director of Law & Order and LA to Vegas Don Scardino and the director of Sex and the City Michael Patrick King finished their project 2 Broke Girls. The series tells the story of the waitresses who dream of setting up their café; Ayda Field played Constance.

In 2018, the actress and her husband became the jury members in the 15th season of the British music show The X Factor. Sharon Osbourne, Mariah Carey, Taylor Swift, and Gloria Estefan are also in the jury.

Ayda, Robbie, and Gwen Field have recently agreed to star in the fly-on-the-wall reality show whose title has not been announced yet. Besides, Ayda will appear in Celebrity Apprentice, the analog of Donald Trump’s The Apprentice. Together with other stars, Field will compete for the prize; the money will be donated to a charity fund. 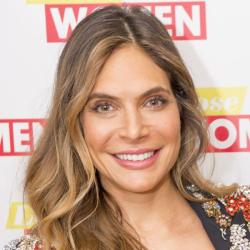