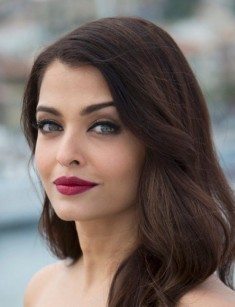 Aishwarya Rai is a unique Indian actress who has gained huge popularity beyond the limits of India. The beautiful girl has conquered the whole world, having received the title of Miss World in 1994 and later she became a Bollywood star and then a Hollywood celebrity as well.

Aishwarya was born on the 1st of November, 1973 in the Indian city of Mangalore. Her family was rather respected and financially provided: her father Krishnaraj occupied an honorable position of the officer of the merchant navy fleet and was a significant person in the town. Her mother Brinda was a well-known and popular writer. In her childhood, Rai was interested in the art, and like many other Indian girls, she learned to dance and to play music. In a short time, Rai's family moved to Bombay where the future entered the prestigious college. Not many people in India could afford such good education; the girl learned languages, including English which has helped her much in her future career.

The movie star wasn't planning to become an actress or a model. Zoology was her favorite school subject, and the girl was dreaming of becoming a veterinarian or a doctor. But in a short time, her achievements in this subjects became less impressive and successful, and Rai lost her interest in it. She admired the beauty and the practicality of the buildings. Aishwarya wanted to become a well-known architect whose creations could delight the viewers during long years. That’s why the actress entered the College of Arts but soon changed her studies for the opportunity of beginning the career in the model industry.

Already in early childhood people who surrounded the girl noted Aishwarya's extraordinary beauty. When the girl turned eighteen, she was invited to the model agency. Rai's debut on the podium was quite successful, and she began to participate in different beauty pageants which have brought the girl her first victory just in a couple of months after the beginning of her career.

Aishwarya became the winner of the contest of the supermodels organized by Ford company. Sometime later the Indian beauty appeared on the cover of the popular of Vogue American magazine. She became the most well-known girl in India. Every day she received a couple of dozens offers to become the face of different brands.

In two years the model took part in the shooting of the commercial for the famous Pepsi company. This event has also contributed to her popularity and world recognition. By the way, she said only one phrase in this video.

When in 1994 Rai offered her candidacy for Miss India beauty pageant she at once got to the list of the favorites who were prophesied to win the first place. But it was unbelievable that the star of the podium didn’t receive the crown, and another girl Sushmita Sen was entitled, Miss India. Rai took the second place and became the owner of the title Miss India of the World.

The girl accepted her defeat quite easily. She kept smiling on the public even after the fact that the crown was given to another pretender. Also, the same year Rai took part in the international beauty pageant Miss World which took place in Sun City in South Africa where she became a winner.

In 1997 Aishwarya decide to finish her model career and to be engaged in the acting career. She debuted in the Indian cinema the semi-biographical drama The Duo which was recognized as Best Movie at Belgrade International Film Festival. The film was shot in the Tamil language. The aspiring actress didn't know this language, and that's why the other actress Rohini, who knew the Tamil language voiced over Rai’s character.

After such successful start of the acting career Rai accepted the invitation to take part in the romantic comedy Aur Pyaar Ho Gaya. This movie turned out to be a commercial failure, and the storyline and Aishwarya's were harshly criticized. As a result, Aishwarya decided to improve her acting skills, and in the following project, she focused on her best skills - dances. The picture under the title Jeans came out in 1998 and received very positive feedback and reviews. Aishwarya's dancing skills gained particular admiration and attention.

Rai has received true recognition after the movie Straight From the Heart had come out. She performed the role of the leading character Nandini - the girl who fell in love with the Italian musician but was forced to get married to another man. That time the critics noted the emotional acting of the actress. In 2000 Aishwarya got her first film award for Best Actress in this picture. The same year there was released the movie Love Stories in which Rai appeared together with the Bollywood king Shah Rukh Khan. But the actress didn't plan to be satisfied with what she had already achieved and dreamed about world recognition. Soon, Aishwarya Rai got such a chance.

In 2002 Rai participated in the shooting of the musical melodrama Devdas. The movie was shown at the Cannes Film Festival, and the Times magazine called it one of the best movies of the century. Due to this movie, Aishwarya became one of the most demanded Bollywood actresses and also gained world recognition as a movie actress. The journalist Alan Morrison from Empire magazine highly appreciated Rai’s acting skills and talents.

Rai’s participation in the English-language picture Bride & Prejudice became the first serious step for the star of Indian cinematography in her way of conquering Hollywood. This movie was based on the events of the well-known book "Pride and Prejudice" which was adapted under the Indian realities. The film came out in 2004 and turned out to be somewhat successful what allowed the actress to continue her career in the foreign cinematography and to receive principal roles.

The picture Mistress of Spices became the next project which was also shot by the American company in English.

The interest to the Aishwarya's personality was increasing, and she began to receive invitations to take part in many popular foreign talk shows (Oprah Winfrey Show, David Letterman Show and other).

In her assets, Rai has joint movies with one of the sex symbols of the Indian cinematography - Hrithik Roshan. And not the only one, but three - Dhoom 2: Back In Action (2006), Jodhaa Akbar (2008), Guzaarish (2010). In the picture Action Replayy, Rai acted together with one more Bollywood star - Akshay Kumar.

In 2007 Rai performed in the fantastic fighter The Last Legion. The British actors became her colleagues on the movie set, what was a new experience for the Bollywood star who earlier had been shooting only with the Indian actors. Nevertheless, she has brilliantly performed her role and soon received an offer to play a role in the movie Pink Panther 2 where she met the world-famous actors - Steve Martin and Jean Reno. Besides, Aishwarya was also invited to take part in the movie Troy in a duet with Brad Pitt, but she refused this role.

Well, and how can it be without songs when it comes about the Indian actress? She has a couple of dozens of the songs and videos which have gained tremendous popularity.

As well as many actresses and models, Aishwarya spends a lot of time for social and public events. She became a representative of the famous brands many times: in 1999 Rai became the Ambassador of Elegance of Longines company, in 2003 she became the face of the large L'Oréal cosmetic brand along with such famous American actresses as Eva Longoria, Andie MacDowell, and Penélope Cruz.

In 2004 the actress established Aishwarya Rai Foundation which primary objective is to help underprivileged Indian people.

In February 2005 together with other Bollywood stars, Aishwarya appeared at the concert "HELP! Telethon Concert" which goal was to raise money for the people who had suffered from tsunami consequences. She became the founder of the school for unprivileged Indian girls which was opened in Daulatpur.

In 1999 Aishwarya had relations with the Bollywood actor Salman Khan. The young people often appeared in the news, but two years later they broke up. The actress told that regular insults and humiliations from her partner became the reason for their separation. However, Khan denied blaming for the offenses mentioned above about what he said in his interview in 2009.

During the shootings of Blast 2 in 2006 Rai got acquainted with the actor Abhishek Bachchan, and a year later the loving couple announced their engagement.

By Hindi traditions, their parents have approved their marriage, and already on the 20th of April, 2007 Bachchan became Aishwarya's spouse. Till the moment of marriage, Aishwarya who was very religious was living in her parent's house.

In 2011 the daughter Aaradhya was born at the spouses.

The movie O heart, it is difficult in which Rai performed the role of the beloved woman of the hero of the well-known Indian actor and producer Ranbir Kapoor became one of the most long-awaited movies of 2016. The same year the actress has excited the guests of the Cannes Film Festival. It was not her role in the movie Still Waters which was demonstrated in Cannes, but her unusual appearance. Earlier the actress preferred a classical make-up, and suddenly she appeared on the red carpet with bright violet lips. Perhaps, it was a demonstration of 2017 trends as Rai is the face of L'Oreal company.

At the same event, the tabloids haven't lost an opportunity to consider the second pregnancy of the actress. By the way, for five years after the birth of her daughter, Rai has returned to her former shape (her growth is 170 cm, and she weighs 55 kilos), and nothing reminds about the fact that in due time her weight reached 80 kilos. 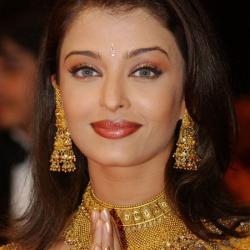