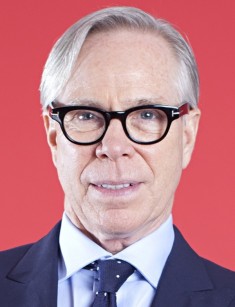 Tommy Hilfiger is the American fashion designer, the founder and art director of the globally famous brand. He is the philanthropist, laureate of many awards, and sponsor of sports teams and music stars.

Tomas Hilfiger was born in spring 1951 not far from New York. He lived in a middle-income large family: the father was a watchmaker, and his mother was a hospital nurse. Hilfiger has Scottish and Irish roots; he claims his ancestors are related to the poet Robert Burns, but there has been no documentary evidence of that.

Tomas’s childhood can hardly be called cloudless. The second eldest child among the nine kids in the family, the boy was not spoiled by toys or sweets. Young Hilfiger was dyslexic which made him a distant boy who had no friends. However, the young man got rid of his disadvantage in high school.

In the late 1960s, America was engulfed in the hippie style; The Beatles, Rolling Stones, and Jimi Hendrix were at the peak of their popularity. Young people mimicked their icons: they wore long hair, bell bottoms, and glasses. Tommy was one of the young people who followed his favorite stars.

As soon as the 17-year-old young man finished school, the parents sent him to study engineering. However, Tommy realized it was not the right path for him and quitted. He saved $150 and bought 20 pairs of Landlubber jeans and opened a small shop People’s Place.

In the early 1970s, the shop chain People’s Place consisted of 7 boutiques in New York. In 1977, the young businessman went bankrupt. Nevertheless, the future designer was not going to give up. Instead, he took up trade management courses.

In 1979, the designer moved to Manhattan and started creating clothes. In a while, the young man worked for Calvin Klein and Perry Ellis. Brand founders liked Hilfiger’s ideas and offered him the position of designer. Still, the American wanted to work independently and refused many prestigious offers.

In 1985, 33-year-old Tommy Hilfiger founded his own brand, and his brilliant fashion career began. The debuting preppie collection included golf shirts, jackets, and panties. The next year, Hilfiger spent $3 million on advertising his brand and advancing it.

In 1992, Tommy Hilfiger Corporation had the men’s clothesline released; the global fame came in. The same year, Calvin Cordozar known as Snoop Dogg ordered a stage costume, and other American show-business stars followed in his footsteps.

In the mid-1990s, Tommy Hilfiger’s popularity was immense: the flow of VIP clients and awards was constant.

In 1996, the art director launched the debuting perfume line. The first women’s perfume Tommy Girl was notable for the jasmine, mint, and tangerine scent.

In 1997, Hilfiger’s top-of-the-line boutique was opened in Beverly Hills; it occupied more than 2000 m2. People could buy not only clothes but also watches, backpacks, belts, and glasses created by the famous designer.

The next year, Tommy Hilfiger sponsored Lenny Kravitz’s tour; in 1999, he did the same for Britney Spears and Rolling Stones and created costumes for them. The official website and Internet store were launched as well; free home delivery was available for customers.

In 2001, Tommy Hilfiger pleased his fans with launching shoe production; he also opened a store in the historic center of New York, Manhattan.

In 2004, the annual sales of the company equaled $1.8 billion, and there were approximately 5500 employees there. The brand sponsored the US ski team Freestyle and took the team Ferrari under its patronage the next year. In 2005, Hilfiger also presented the reality show for beginning designers who competed for the right to create their own collection of the brand.

In 2006, the sales reduced, and Tommy Hilfiger sold the company for $1.6 billion. In 2010, the corporation that had the rights on Calvin Klein, Timberland, and Donna Karan bought the firm; the price was twice as much.

In 2011, the art director created the clothesline for small fashion lovers together with Disney; there were Disney characters pictured in those T-shirts for girls and boys.

The clothesline was accompanied with cotton tote bags. The same year, Finger and his colleague Lisa Birnbach presented the preppie collection of panties, sweaters, pullovers, and hoodies.

The designer’s first married to Susan Cirona. Four children were born in this marriage: the son Richard and the daughters Ally, Elizabeth, and Kathleen. However, the couple split up.

For the second time, Tommy Hilfiger married in 2008; the former model Dee Ocleppo became his wife. In 2009, she gave birth to the son; Hilfiger was 58 years old.

The designer communicates warmly with all his children. In 2017, he created a wedding dress for his daughter Elizabeth.

In February 2018, the designer introduced the new spring-summer collection based on the idea of speed. Hilfiger presented the line in Milan and trusted his muse Gigi Hadid to open and close the fashion show. The star’s younger sister Bella Hadid also appeared on the runway.

Models were walking the runway designed to remind of a racetrack. The master chose Formula 1 as the main theme of his new collection; the audience appreciated the stylized boots, leather panties with knee pads, jackets, and trademark three-color knitted skirts.

More than 5000 employees work for Hilfiger; his annual profit is approximately $135 million.

In 2008, the master purchased a mansion in north-east Connecticut; he spent $27 million for that. Later, he bought some property on a Caribbean island and built houses at 4 ha of the coastal strip.

In 2011, Hilfiger bought a building in Manhattan and created a luxury hotel whose cost is estimated at $170 million. 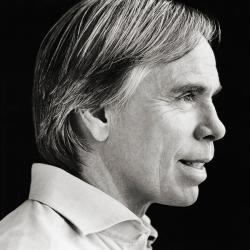