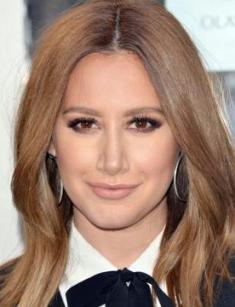 At the age of three, Ashley Tisdale already had an agent. Five years later, the face of the baby girl was familiar to millions of Americans: Ashley starred in a hundred commercials that were broadcast on national television. When she was eight, the girl was approved for a role in Les Misérables, and for two years she traveled around the country with the troop. At the age of twelve, lovely Ashley Tisdale sang to the White House residents.

Ashley Michelle Tisdale was born in July of 1985 in the state of New Jersey. Ashley spent her childhood years in the town of Ocean Township in Monmouth. At the time of Ashley's birth, the family of Michael Tisdale, the head of a construction company, and Lisa Morris were bringing up fourth daughter, Jennifer.

Ashley Tisdale is Jewish on her mother's side. Her grandfather, Arnold Morriss became famous for the invention of knives of the popular Ginsu label. The family of the future Hollywood star did not raise any actors or artistic people. However, it did not prevent Ashley Tisdale from dreaming about an acting career.

Bill Perlman, the future manager of Tisdale, met the actress when she was three years old, and they have been working together ever since. Perlman noticed the lovely curly girl with big brown eyes and a sunny smile by accident: Ashley was walking through the shopping mall with her mother, on the hunt for a cute baby doll. Bill suggested that Ashley should star in a TV commercial. The debut was so successful that soon Ashley Tisdale worked on dozens of advertisements.

Ashley Tisdale took the stage at the Jewish Community Center of Monmouth: the girl was entrusted with the role in the performances of Gypsy: A Musical Fable and The Sound of Music.

At the age of eight, Tisdale saw the Broadway production of Les Misérables for the first time. Later Ashley admitted that what she had seen made a lasting impression on her. She confessed to Perlman who used to send her only to the auditions for TV commercials that she wanted to get a part in the musical.

Sonn Ashley Tisdale was shining on the Broadway stage in the role of Cossette. After a two-year tour, the young actress was offered a role in Charles Strouse Charnin's musical Annie. At the age of twelve, the young star was already singing for the President of the United States, Bill Clinton.

After the success in musicals, the creative biography of Ashley Tisdale took off and became full of roles in various television series. The young actress appeared on the television screens in Smart Guy, 7th Heaven, and Boston Public. For her work in the latter one, the aspiring actress received a nomination for Young Artist Award in 2000. Ashley was also offered a part in the movies Donnie Darko and The Mayor of Oyster Bay.

In 2004, Ashley was offered to play the role of Maddie Fitzpatrick, sweets saleswoman in the Disney television project The Suite Life of Zack & Cody. The premiere of the series took place in the spring of 2005; the series was broadcast till 2008. For her part of Fitzpatrick Ashley was awarded the Nickelodeon Kids' Choice Awards as the Best Actress. The central characters of the comedy television series were played by brothers Dylan Sprouse and Cole Sprouse, as well as actors Brenda Song and Kim Rhodes.

The image of "a good girl" in the comedy series The Suite Life of Zack & Cody almost prevented Ashley Tisdale from getting a part in another Disney project, High School Musical. However, Tisdale managed to persuade the producers that she could easily switch from being a good girl to playing a total evil. In 2006, the actress appeared in High School Musical in the role of a self-obsessed narcissistic high school student, Sharpay Evans.

High School Musical enabled Ashley Tisdale to show her another talent - her glorious voice. She composed and sang two songs for the musical: What I've Been Looking For and Bop to the Top.

Both of the songs became the soundtrack of the project. The songs were so popular with the audience that they got into the Billboard Hot 100. Ashley Tisdale is the first actress who made her debut in a hit parade with two songs at the same time.

High School Musical proved to be incredibly popular: in the year of release on the Disney Channel, it was seen by 7.7 million viewers. Together with Ashley Tisdale, the main characters were played by Zac Efron and Vanessa Anne Hudgens.

The music corporation Warner Bros. Records signed a contract with the singer after the resounding success of the musical and soundtracks written by Ashley Tisdale. And in 2007 she released her debut album called Headstrong. Soon it was certified as gold. The album debuted in the fifth position of the hit parade Billboard 200. The first two songs of the record became hits, and the guys even filmed music videos that had a lot of views.

In the same year, Ashley Tisdale played the leading role in the movie Picture This that was translated on ABC Family. The audience saw Ashley in an unusual part of a self-conscious meek teenager named Mandy Gilbert. Tisdale became the producer of the motion picture that gathered 4.3 million teenagers at the television screens on the night of the premiere.

In 2007, the actress took the tenth position in Hot-11 list of Maxim magazine and the 94th position in the list of Celebrity-100 by Forbes. Ashley Tisdale managed to make a financial success, receiving $2.8 million for her work on the comedy film High School Musical 3.

In the same year, there came out Tisdale's second album Guilty Pleasure that Ashley called more cocky and bold. However, the songs from the album got mixed reviews and the average ratings.

The year 2009 that was rich on events was marked by the release of the motion picture Aliens in the Attic, in which the actress played the main character, Bethany Pearson. However, the movie got average box office returns and was not very successful.

In 2010, fans of the talent of the young actress saw their favorite girl in the teenage drama series Hellcats, in which she played the part of Savannah Monroe. In 2011, Ashley Tisdale appeared in the spin-off of High School Musical, a comedy-drama film Sharpay's Fabulous Adventure. The actress played the leading role and acted as the executive producer of the musical.

The year 2013 gave comedy fans the fifth part of the mockery movie series called Scary Movie 5. The director of the comedy movie, Malcolm D. Lee, approved Ashley Tisdale for the leading role of Jody Sanders. The premiere of the film took place in April.

9.3 million people follow the private Instagram account of the star. It is the place where one can find the latest news about the personal life and career of the actress.

It becomes perfectly clear why this girl has a multi-million army of fans if one considers both her talent and appearance. This beautiful actress is 5 feet, 24 inches tall, and she weighs 103 pounds. In 2007, Tisdale got a nose job to fix the consequences of an old injury - two small fractures of the nose that prevented her from breathing properly. Nothing else is known about any other plastic surgeries of the actress.

Ashley is friends with many Hollywood hot celebrities, but most often she appears together with Selena Gomez, Miley Cyrus, and Vanessa Hudgens. With Vanessa Hudgens, the actress was seen not only on the star parties and shopping but also in a tattoo salon. Ashley has three tattoos: the phrase Jamais seule (Never alone) is tattooed on her leg, on the arm, there is a "Fearless" tattoo, and "Believe" can be seen on the back of the celebrity.

The personal life of the star is known to the public. From 2007 to 2009 she went out with dancer and actor Jared Murillo. This relationship was replaced by a romantic affair with film director Scott Speer, which lasted from 2009 to 2011.

In December 2012, Ashley Tisdale and musician Christopher French had an affair that culminated in a wedding. In the summer of 2013, the couple announced their engagement, and in September 2014 they got married. The celebrity shared some photos from the ceremony with her fans on Instagram, calling it the "best day" of her life. Vanessa Hudgens became her bridesmaid, as it was expected.

Ashley Tisdale has a net worth of $10 million. In the summer of 2016, the premiere of the comedy movie Amateur Night directed by Lisa Addario and Joe Syracuse took place. Ashley Tisdale appeared in the film in the leading role alongside Jason Biggs, Bria Murphy, and Janet Montgomery. The comedy movie revolves around an unemployed architect Guy Carter (Jason Biggs) who is struggling to pay his bills.