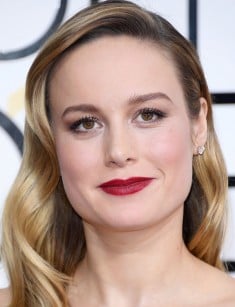 Brie Larson became famous at 27: the role of Joy in Lenny Abrahamson’s Room brought the actress the Academic Award, the Golden Globe, the Screen Actors Guild Award, BAFTA, and the international popularity. All roads were open for Larson in Hollywood: in 2016, she received the role of Captain Marvel in the superhero action movie under the same title.

Brianne Sidonie Desaulniers was born in Sacramento, California, in 1989. There were no actors in the family: the girl’s parents were alternative medics, chiropractors. Brie had a younger sister Milaine. The father, the Canadian French Sylvain Desaulniers, left his wife and two daughters when the girls were small. In 2016, the actress told Elle that she did not see her father or talk to him for ten years after the parents’ divorce.

After the break-up, Heather Desaulniers and her daughters moved to Los Angeles, the heart of cinematography; this event influenced Brie who realized she would become an actress at primary school. Later, she entered the American Conservatory Theater and appeared in American TV shows soon; she debuted in The Tonight Show with Jay Leno.

In 1998, the nine-year-old girl appeared in an episode of a low-budget movie To Have & to Hold. The next year, the young actress was invited to the series Special Delivery, the drama series Touched by an Angel, and the youth sitcom Popular. In all these projects, Larson had episodic roles.

Brianne seemed to have caught her luck when she received the roles in the sitcoms Schimmel and Hope & Faith. However, Schimmel was closed after the pilot episode since the comedian Robert Schimmel was diagnosed with cancer, and the young woman also failed to appear in Hope & Faith: she was dismissed from the role.

In the early 2000s, Brianne took the pseudonym “Brie Larson”: she reasonably believed her father’s second name Desaulniers was too difficult to pronounce and hardly suitable for an American actress.

Similar to many beginning actors, Brie Larson started her career with episodic and minor roles. The teenage girl played in the series Special Delivery and Then Came You. In 2003, 14-year-old Larson appeared in the tightly-plotted youth movie Right on Track where she got her first lead part of Courtney Enders. It was a Disney project telling the story of two teen sisters who dared to challenge male race car drivers.

In the 2000s, Brie Larson usually had two or three projects per year. She worked on 13 Going on 30, Sleepover, Hoot, House Broken, and a dozen other movies, yet none of them was high-ranking and brought the young actress success.

Even the comedy drama United States of Tara produced by Steven Spielberg himself did not turn Larson into a star. The series was broadcast on SHO, the American premium satellite channel, in 2009-2011. Toni Collette who played the protagonist won the Golden Globe and Emmy Awards while young Brie Larson who took the role of Tara’s daughter had no prizes or even nominations.

In 2010, the actress appeared in Edgar Wright’s youth phantasmagoria Scott Pilgrim vs. the World starring Michael Cera and Mary Elizabeth Winstead. In this project, Larson tried herself as a singer for the first time and created an indie-pop song for the melodrama.

The role of Molly, the drug dealer’s girlfriend in the comedy action movie 21 Jump Street, brought the young actress more attention. The creator of the project, Jonah Hill, who also took the lead part, invited Johnny Depp to the movie and prepared a bright episodic role for him. The movie was premiered in 2012.

Joseph Gordon-Levitt’s Don Jon was another significant project for Larson. The actress personified the main character’s sister Monica Martello. Scarlett Johansson and Julianne Moore starred in this project as well.

In 2014, the premiere of the thriller The Gambler, the modern screen adaptation of Fyodor Dostoevsky’s novel, occurred. Mark Wahlberg played the main character; Brianne took the role of Amy Phillips. However, the movie flopped and hardly recovered its cost.

2015 was the year of the actress’s triumph: Lenny Abrahamson’s drama Room came out. To critics’ surprise, the Irish and Canadian low-budget project was a tremendous success. According to Rotten Tomatoes, Room has the highest rating: 94%. The British website Metacritic gave the drama the status “Universal acclaim.”

Brie Larson got the international fame for the role of the main character, young Joy. The audience was touched by the heartbreaking image of the 17-year-old girl kidnaped by a rapist. She was held in a barn and gave birth to a child. Brianne’s acting was so convincing that she gained all possible prizes including the long-awaited Academy Award.

The young Canadian actor Jacob Tremblay, who had appeared in the horror Before I Wake, came to the Academy Award ceremony wearing a suit. The boy and his movie mother graced the event and attracted much attention from the media and other celebrities.

In 2005, Larson had her first album Finally Out of P.E. released. Larson’s soundtracks may be heard in the movies Barbie and the Magic of Pegasus, Hoot, and Scott Pilgrim vs. the World.

The woman is fragile: her height is 170 cm., and her weight is 51 kg. Larson has numerous fans. The number of her Instagram followers exceeded 750 thousand.

Since 2013, Brie Larson has been dating the musician Alex Greenwald; he accompanied her at the Academy Award ceremony.

The couple’s relationship seems to have passed the necessary trials: in 2016, the actress’s official representative confirmed the rumors about the woman’s engagement. Fans are looking forward to Brie and Alex’s wedding.

In 2015, Brianne and her star colleagues, Tom Hiddleston and Samuel L. Jackson, played in the fantasy action movie Kong: Skull Island. The movie was shot in Queensland, Australia; the premiere took place in early spring 2016 in Los Angeles, in the famous movie theater Dolby. Tom Hiddleston and Brie Larson presented the movie.

Today, Larson is in the center of people’s attention again: in 2016, she surpassed her Hollywood colleagues Alicia Vikander and Emily Blunt and took the role of Captain Marvel. In 2017, it was announced Anna Boden and Ryan Fleck were going to direct the superhero project. The premiere is scheduled for March 2019. 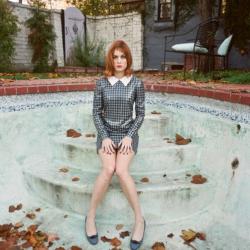