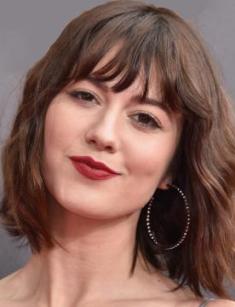 Mary Elizabeth Winstead is a talented American actress who debuted on the screen in the late 1990s in the TV series Touched by an Angel. The audience recognized her for Monster Island, The Ring Two, Final Destination 3, and Scott Pilgrim vs. the World.

The would-be celebrity was born on November 28, 1984, in Rocky Mount, North Caroline. Five years later, the girl’s family moved to Salt Lake City, Utah; this is where Mary spent her childhood.

Young Winsted was fond of singing and participated in theater performances. When the parents saw their daughter’s passion for art, they gave her to a ballet school. The talented student had the opportunity to develop a deep love for dancing and learn how to express her emotions through body language.

Mary was charismatic and goal-oriented; it took her a couple of months to join the main Broadway troupe. The artist debuted in Joseph and the Amazing Technicolor Dreamcoat. People liked the beginning actress. Mary enjoyed her success and started considering acting as a career.

Winstead debuted in the TV series Touched by an Angel. Although her role was minor, the young woman loved the feeling that covered her as she was watching the filmed material; she continued to polish her skills.

Soon, the actress participated in the series Promised Land and Passions. The next couple of years did not bring outstanding parts, despite Mary’s endeavor. In 2004, she worked on the adventure comedy Monster Island with Carmen Electra. Critics did not appreciate the old-fashioned special effects, but Winstead’s remarkable acting and bright appearance were noticed.

In 2006, the young woman took part in the horror The Ring Two; the next year, she was given the lead part in Final Destination 3. The horror Black Christmas followed and brought a secondary role.

In May 2007, Quentin Tarantino’s Death Proof was premiered at the Cannes Film Festival. Mary played Lee Montgomery, the beginning actress. She and her friends are going to revenge the insane stunt double Mike (Kurt Russell) who murdered their acquaintance.

The same year, in summer, the artist participated in the adventure thriller Live Free or Die Hard with Bruce Willis. In 2008, she appeared in the drama Make It Happen. 2010 brought the comedy Scott Pilgrim vs. the World based on popular comics; Mary played Ramona Flowers, the eccentric young woman whose past is full of secrets.

In 2012, Mary met Aaron Paul on the movie set of Smashed; the artists played a couple united by their love of music and alcohol. Further on, Winstead participated in Abraham Lincoln: Vampire Hunter and The Beauty Inside.

Spring 2014 brought the lead part in the drama Alex of Venice. Mary played a lawyer whose personal problems prevented her from focusing on work.

Soon, the actress collaborated with Jeremy Renner in the action movie Kill the Messenger. It is the story about an unknown journalist Gary Webb who discovers the information that could reveal the fact that the government sells cocaine.

2016 was full of exciting projects. Mary participated in the thriller 10 Cloverfield Lane. Her character, Michelle, wakes up in an unknown place; a mysterious stranger convinces her that the world was destroyed by aliens and tells her she is safe there, with him.

Besides, Winstead took part in the series BrainDead about a young journalist who witnesses the attack of alien insects on the leading American politicians. In summer, the tragicomedy Swiss Army Man with Daniel Radcliffe and Paul Dano was released; the premiere was held at Sundance Film Festival.

At the age of 18, Mary met the young director and screenwriter Riley Stearns during a voyage; they did not part from that moment and spent ten years in a common-law union; the official marriage took place in November 2010.

The spouses often posted their photos together on social networks; they seemed radiant with happiness.

The love went out suddenly in May 2017: the celebrities announced their divorce on Instagram. The news was posted under the photo where Riley and Mary were hugging each other tenderly. The woman thanked the ex-husband for the warm and happy days, and the movie-maker promised to support his ex-spouse and pledged his love for her.

Fans guesstimated the artist broke up with her husband because of a new passion: in October, the paparazzi caught Winstead kissing the Trainspotting star and Fargo colleague Ewan McGregor.

When the photo was published, people accused the man of cheating on his wife, Eve Mavrakis; they had four kids together. As it turned out, the actor had separated from her a couple of months ago; the reasons for the family disagreement were not revealed. Rumors had it McGregor just took his belongings and left the family mansion. In 2012, the actor said at Graham Norton Show that he had dated dozens of women but Eve made him realize he wanted a peaceful, calm life.

After this confession, McGregor denied any rumors about his cheating. When the actor was asked about his affairs, he would change the subject to pure thoughts and strong spirits.

In April 2017, the third part of the crime drama series Fargo was released; FX had extended it in November 2015. The actress played charming Nikki Swango who had just been released from prison. The freedom-loving gambler changes when she meets officer Ray and becomes a superhero fighting criminals.

Although all seasons are related, various actors participate in each part. The third season starred Ewan McGregor, David Thewlis, Carrie Coon, and Michael Stuhlbarg. The last episode was aired in June 2017; soon, the creator of the project Noah Hawley announced the next season.

Besides, the brunette appeared in Justin Carlton’s short movie So It Goes. The 13-minute picture shows the woman who takes everything around too seriously. When she meets a stranger in the street, her life gets new colors.

Despite her busy schedule, the actress does not forget about her fans and regularly posts vacation pictures and videos from movie sets on her Instagram.

Mary Elizabeth Winstead’s net worth is $6 million in 2019.