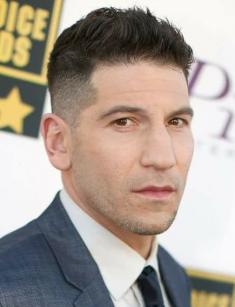 The fans of Jon Bernthal, who played the Punisher, Al Capone and a simple zombie killer, is called the embodiment of John Wick. The man, like the character of Keanu Reeves, dressed in dark suits, loves dogs and often takes too serious.

However, the actor has nothing to do with a cold-blooded killer in his real life. Bernthal is involved in charity work in his spare time and "Instagram" of the actor is full of warm images with children, wife and parents.

On September 20, 1976, Jon was born in the family of the famous lawyer Eric Bernthal (and his father and mother are emigrated Jews). The child was born in Washington and grew up, surrounded by his brothers – Nicholas and Thomas. Despite the serious profession of his father, it was often spoken in the house of Bernthal about the work of his grandfather and uncle, who made a career in the music industry.

By the end of school, a young man, who devoted his free time to boxing and baseball, was 5,8 feet (1.78 m) (now the weight of the actor is 187 feet (85 kg)). His relatives predicted the teenager the career of the professional athlete or the lawyer but the casual meeting with the teacher of actor's skill turned the biography of the young man.

The girl advised Jon to go to Russia to get an education at the Moscow Art Theatre in Russia. Bernthal entered the Russian University quickly, he began to master a new language and studied ballet, practiced gymnastics and played baseball at the same time. The young man returned to the United States, where he later continued his education at Harvard University and received a master of arts degree.

Despite the prestigious education, the actor's career was not made immediately. The first stop on the way of the actor was in New York, where he appeared in performances of little-known directors, who made Off-Broadway theatres. Bernthal played in more than 30 plays before he moved to Los Angeles and tried his hand at the cinema.

The man received his first episodic role in the film in the popular TV series Law & Order in 1999. The debut was followed by a series of small works that were not remembered by the audience.

In 2006, Bernthal was lucky. The man got his first permanent role in the TV series The Class. Jon appeared in the form of a guy-a worker before the public, who wants to return his school love. Ratings of the serial movie didn't satisfy the producers, so the series was canceled after the first season.

In 2009, the actor was offered a minor role in the film Night at the Museum: Battle of the Smithsonian. The man played the role of Al Capone and Jon passed the casting in the series The Walking Dead a year later. Later, the artist admitted in the interviewer that he rejected two lucrative offers from the studio before he was approved in the series about zombies. The man just felt that he would get the role and did not want to be exchanged for something else.

His participation in the successful project ended in 2012. There were rumors that the actor asked the writers to eliminate his character because he was tired to do a movie about the apocalypse. But Jon denied this information, having declared that his hero ceased to exist both in series and in the comic book which was the primary source of a plot.

Already in 2013, the man receives the role of Brad Bodnick in the film The Wolf of Wall Street of Martin Scorsese. The next step to world fame was the film Fury, where the actor played with Brad Pitt. Bernthal had to go through several stages of listening to get the episodic role. The producers sent the entire cast to the camp for military recruits, where men had to learn a new craft for greater credibility in the frame.

In 2014, the actor gave his voice and the appearance to the computer character from the game Call of Duty: Advanced Warfare Jim Decker during the break between filming. The representatives of Marvel Studios invited Bernthal to turn into the character from the comics known as the Punisher (the real name Frank Castle) a year later. The man plays an important role in the plot of the second season of Daredevil. It is a serial film about a blind superhero.

The character of Jon had to continue the story the same year when "Netflix" launched an independent series about the fate of an unusual hero. Frank Castle is a man, who is obsessed with the idea to avenge his family, alone fighting with the mafia, using the strictest methods. In 2017, it was known about the extension of the favorite serial film for the second season.

Jon had another main role in the film Shot Caller. Bernthal reincarnated as a guy nicknamed Shotgun. His colleagues on the set were Nikolaj Coster-Waldau and Omari Hardwick.

Despite his openness and sociability, Jon does not talk about his family in interviews. In September 2010, the actor married his longtime friend Erin Angle. A man calls his beloved "Lila Bird" and even got a tattoo with the nickname of his beloved on his chest. The wedding took place in a mansion located in the city of Potomac.

The wife of the star of The Walking Dead grew up in a family where wrestling was especially revered (the girl is Kurt Angle's niece). Therefore, Erin took part in the competition before their marriage. After the wedding, she left the sport and is engaged in the education of children.

In August 2011, the couple became parents for the first time. The couple Bernthal had the boy, who was named Billy. In February 2013, Henry Bernthal was born two years later. Jon became a father for the third time in February 2015. The couple had a girl, whose parents called Adeline this time.

In June 2018, it was known about the negotiations between the actor and the production center, launching the film Ford v. Ferrari. Jon was offered the role of Lee Iacocca, a famous marketer working for Ford. Matt Damon and Christian Bale will play together with Bernthal in the film. The premiere of the movie is scheduled for 2019. Jon Bernthal has a net worth of 8 million dollars.

The fans of the artist were stunned by the news that Jon may again return to the image of Shane from The Walking Dead. Paparazzi took a photo of a man on the set along with other actors of the series. Another reason to believe in the unexpected return of Bernthal was the news that Andrew Lincoln (the main character) leaves the show. The producers hope to hold the attention of a disappointed audience with Shane's return.

In the second half of 2018, there was the premiere of the film Widows, in which Jon played one of the main male roles. The script of the film was a joint work of Steve McQueen (12 Years a Slave) and Gillian Flynn (Gone Girl).

Another new work in the actor's filmography is The Peanut Butter Falcon. The exact release date of the dramatic comedy, as well as other details of filming and post-production, are still unknown. The film tells the story of the adventures of a young man with down's disease, who dreams of becoming a professional wrestling fighter.

The latest news about the life of the actor are on Jon's account on Twitter. The man shares his favorite movies, important news and personal photos there.