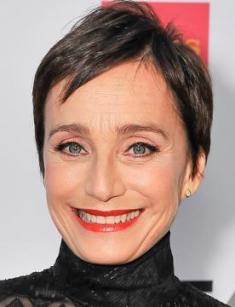 her work in the English Patient. Having played Katharine Clifton, the actress got an Oscar nomination. No one remembers that in her youth, she worked as a maid, because, according to the teachers, she had no acting abilities.

Kristin Scott Thomas was born in Redruth on May 24, 1960. Her mother, Deborah (née Hurlbatt), grew up in Africa and Asia, studied theater before marrying Lieutenant Commander Simon Scott Thomas, who worked as a pilot in the army of the Royal air force and died in a plane crash.

The girl was barely five years old when her father died. Kristin is not the only child in the family. Her younger sister's name is Serena. Admiral Sir Richard Thomas, a former member of the House of Lords, is a close relative of the actress, as is Captain Scott, who participated in the expedition to the South Pole.

The girl's father, Scott Thomas, lived with his family in a small house in Trent, England, carefully observing all Catholic rites. After the death of her husband, the actress's mother remarried. The second spouse was also a Royal Navy pilot, Lieutenant Commander Simon Idiens, who also died piloting a Phantom FG1 off the coast of North Cornwall, six years after the death of Kristin's father.

Kristin was educated at Cheltenham Ladies College and Stewy's Leweston in Sherborne, Dorset, in private schools. After graduating from school, she moved to Hampstead and worked in a supermarket. Dreams of the stage, set, fans and fame haunted young Kristin, and she began preparing to enter drama school. But at The Royal Central School of Speech and Drama, the girl's talent was not appreciated.

19-year-old Kristin, losing faith in herself, moved to Paris, where she got a job as a housekeeper in a wealthy family. The girl, having received a General Secondary Education in a private school in London, was fluent in French. Knowledge of the language allowed the girl to become a student of the Paris School of Art.

At the final exam in acting, Kristin Scott Thomas drew the attention of the famous movie director Harold Prince, who was looking for a suitable actress for the motion picture Under the Cherry Moon.

Breakthrough in the film career of the actress occurred in 1988. Kristin played Brenda Last in Charles Sturridge's dramatic British movie, A Handful of Dust. For this role, the actress received the prestigious British Evening Standard film award as the most promising aspiring actress.

This was followed by filming with Hugh Grant in Bitter Moon and Four Weddings and a Funeral. For this work, the girl was awarded the BAFTA Award as Best Supporting Actress.

In 1994, Kristin starred in the film of Romanian-French production An Unforgettable Summer, where she played Marie-Thérèse von Debretsy. Instead of learning Romanian, the girl read her text phonetically, but first familiarized herself with the translation of the book into French, which she is fluent in.

In an interview with WENN in 2002, Kristin stated that this was the motion picture that she considered the peak of her career. In an interview for the Gloucester Citizen on March 22, 2015, she called An Unforgettable Summer, one of the movies she was most proud of along with The English Patient and Only God Forgives.

In 1996, the world saw the movie, which brought Scott Thomas popularity. The actress played Katharine Clifton in the drama The English Patient. For this work, Kristin was nominated for a Golden Globe and an Oscar. This was followed by Kristin’s short work with Hollywood directors in such movies as The Horse Whisperer starring Robert Redford and Random Hearts with Harrison Ford. However, disappointed in Hollywood, Kristin left for a year and went on vacation, which at the same time was her maternity leave.

The actress returned to work in 2001, starring in the French theatrical production of Racine, Berenice, and on television as Lady Sylvia McCordle in Gosford Park. This role served as a second career start. Scott Thomas received four nominations for the Olivier Awards as Best Actress. Besides, Kristin Scott Thomas was awarded the prize for her performance as Arkadina in London's West End production of Anton Chekhov's play, The Seagull.

In the summer of 2011, Scott Thomas returned to London's West End to play the role of Emma in the production Betrayal by English playwright Harold Pinter. In January 2013, the actress starred in another play by Pinter, Old Times, again directed by Ian Rixon. And in 2014, she appeared in The Old Vic in the title role of Electra by Sophocles.

Scott Thomas has also starred in movies by French directors. In 2006, she played the role of Hélène Perkins in Guillaume Canet's Tell No One. In 2008, Kristin Scott Thomas received several awards for her performance in I've Loved You So Long directed by Philippe Claudel, including BAFTA and Golden Globe nominations. In 2009, Kristin played the role of a wife who left her husband for another man in the movie Leaving.

In the movie Sarah's Key (2010), Scott Thomas starred as an American journalist living in Paris. In the story, the girl discovered that the apartment, which her husband was renovating for them, was once the birthplace of a Jewish family that was evicted.

Among Kristine's recent works in the 2000s are the roles of Elizabeth Boleyn in The Other Boleyn Girl; the creator, and editor of a fashion magazine in Confessions Of a Shopaholic. Besides, she starred in the film adaptation of Douglas Kennedy's The Woman in the Fifth, the 2012 movie Bel Ami, based on Maupassant's 1885 novel. Scott Thomas played the mistress of Georges Duroy (played by Robert Pattinson).

The actress also starred in The Invisible Woman directed by Ralph Fiennes, in Before the Winter Chill directed by Philippe Claudel, in Nicolas Winding Refn's arthouse thriller Only God Forgives, which premiered at the Cannes film festival in 2013.

The British actress, who remains on the wave of popularity despite her age, is now absolutely free. Her ex-husband, French gynecologist François Olivennes, the woman divorced quite a long time ago. Kristin Scott Thomas and her ex-husband had three children together: Hannah, Joseph, and George.

In March 2013, Kristin Scott Thomas was ranked among the 50 most stylish women over 50 by The Guardian. The unique and inimitable style of the actress can be observed on the photos from various events that Kristin sometimes attends. Kristin Scott Thomas has an Instagram account, where she posts photos with celebrities, including Jeremy Clarkson and Joseph Fiennes. Fans want to find out information about Kristin’s height, age, address, movies and hobbies. However, Kristin urges her fans to respect her privacy and doesn’t want to make her whole life public.

Kristin Scott Thomas has a net worth of $ 12 million. In 2017, American Director Sally Potter presented the Comedy The Party with Kristin as Janet. The movie tells the story of old friends turning into sworn enemies in one evening.

In May 2017, the media reported that Scott Thomas signed a contract to star in the role of Susanne Klatten in the thriller Paramour, directed by Alexandra Therese Keining. The movie is dedicated to the biography of the richest woman in Germany, Susanne Klatten.

The date of the premiere of the movie is yet unknown. In 2018, the movie Tomb Raider was released, Scott Thomas played the role of Anna Miller.

In production are several works with the participation of the actress, the premiere date of which has not yet been determined. Among them are the drama The Kitchen Boy, The Sea Change, and the drama Seconds of Pleasure.