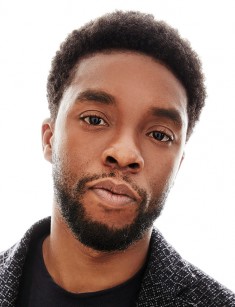 Chadwick Boseman became famous for the roles of Jackie Robinson in the movie 42, and James Brown in the film Get on Up. The character of Black Panther (the Marvel comics character) was no less successful. The American actor portrayed him in the superhero action movie in 2016.

The future actor was born in 1977. Boseman's parents were not connected with creative work. The father was a merchant. The mother worked as a nurse for all her life. However, Chadwick was not interested in business or medicine. From an early age, he dreamed of the stage.

After graduation from high school, Boseman studied at Howard University. He graduated with a Bachelor of Fine Arts in directing. Then he went to England, where he continued his education at the British American Drama Academy.

The future actor participated in the productions of Romeo and Juliet, Illegal in Blue. He received a prestigious award for the role of a troubled teenager in Ron Milner’s play.

As a student, Boseman showed himself as a versatile actor. He played on the stage, wrote scripts, made a short film. He also found time for regular training. The performer of the role of Black Panther has played basketball since childhood. Since 2008, Boseman has lived in Hollywood.

Boseman began his career in the 2000s. At first, he played only in series. In 2003, the project Third Watch premiered, and the actor played a bit part there. At the same time, he starred in the soap opera All My Children. Chadwick Boseman played Reggie Montgomery in the famous series that were broadcast since 1970.

Every year he appeared on the screen more often. He began participating not only in television projects. In 2012, The Kill Hole was released, starring Peter Greene and Billy Zane. Chadwick Boseman portrayed Lieutenant Drake in the war drama.

Nowadays, his most successful film work is a role in the film Captain America: Civil War. Later, the movie was released in which he played Black Panther again. However, this time his character was a central one.

The biographical film 42 premiered in 2013. There were a lot of candidates for the role of the famous basketball player. However, Brian Helgeland chose Boseman. The film tells the touching story of Jackie Robinson, an athlete who destroyed racial barriers and became the first African American to play in Major League Baseball. Harrison Ford, Christopher Meloni, Nicole Beharie also played in the film.

In an interview, the actor said about the role in the film 42: “This is a rare chance to do something that brings real pleasure.” Sport and cinematography are two main aspects of Boseman's life. That is why in his creative biography the role of the basketball player, the legendary man, occupies an important place. Both critics and viewers appreciated the film. The movie grossed $ 95 million at the box office.

After the release of the film 42, Boseman received an offer from director Ivan Reitman. Viewers saw the actor as an athlete again. But this time he played a minor character. In the film Draft Day, Chadwick Boseman appeared together with such stars as Kevin Costner, Frank Langella, Jennifer Garner. The starring cast attracted the attention of viewers. The film grossed $ 29 million.

The sports theme in the filmography of the Oxford graduate is represented by two dramas: 42 and Draft Day. However, Boseman has not been associated with the role of a successful player. Later, he began to portray fantastic characters. In 2016, Chadwick played the god of wisdom in the fantasy film based on the legends of ancient Egypt. The same year he appeared as Black Panther.

Boseman’s hero in the film Captain America: Civil War protects the interests of his state fiercely. Trying to understand his film character, the actor conducted his own research. He traveled to South Africa to see the work of the local rulers.

In the autumn of 2014, it became known that Chadwick Boseman would play Black Panther in Captain America: Civil War. At the same time, there was information in the press about the films in which his character would be a title one. Marvel Studio launched an advertising campaign in 2015. The film was an incredible success. The grosses amounted to $1,153 billion. The project became the fifteenth-highest-grossing film of all time.

Black Panther is a character related to a fictional African state called Wakanda. Chadwick first portrayed an African-American superhero. The comics hero has superhuman power, extraordinary legerity and the gift of healing. Black Panther is scheduled to premiere in February 2018.

Another film with Boseman, which proves his versatile talent, is the role of musician James Brown. The film Get on Up shows the incredible story when a purloiner turns into one of the most influential representatives in pop music. After the release of the movie, the actor admitted:

“To portray Brown was a great test for me.”

Despite the busy schedule, the actor does not stop training. He keeps fitness, which allows him to portray characters with supernatural power easily. Boseman’s height and weight are 180 cm and 75 kg.

It is unknown whether the heart of the performer of the role of Black Panther is free or not. The actor does not post photos with his girlfriend on Instagram. There are only pictures related to movies. Journalists aim futilely to get information about the personal life of the movie star. Probably, the actor is focused on the cinematography. Boseman is not married. The media do not have information about an upcoming wedding or love affair.

The next film based on the Marvel comics is Avengers: Infinity War. Joe and Anthony Russo started shooting it in early 2017. Besides Boseman as the famous superhero, R. Downey Jr., Mark Ruffalo, J. Brolin, T. Hiddleston will play in the fourth part of Avengers.

IndieWire has reported that in 2018, Barry Jenkins will begin shooting a new film. The movie is called Expatriate. Chadwick Boseman will play a leading role. Moreover, the actor will work as a screenwriter. Logan Coles will be his co-author. 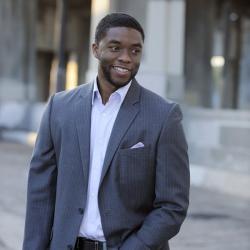