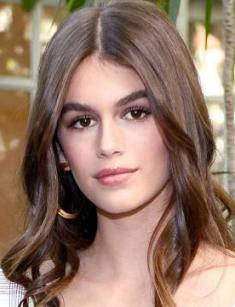 Kaia Gerber is the daughter of the supermodel Cindy Crawford, she follows in the footsteps of her famous mother to the top of success in the modeling business. Her career began at the age of 10 and she was a popular model in the world of high fashion at the age of 16. The girl is the muse of the permanent director of the House of Chanel, Karl Lagerfeld and she has already adorned the covers of the world's leading glossy magazines with her pictures.

Kaia Gerber was born on September 3, 2001, in Los Angeles, California. Her father is Rande Gerber, who is a former mannequin; businessman (owns a network of nightclubs and restaurants). Her mother, Cindy Crawford is the 90's supermodel, the actress, the host. Kaia has an older brother Presley (1999), who is the model, the photographer. The girl's ancestry was mixed with Jewish roots on her father and French, Danish, German and English on her mother.

Born in the stellar family, Kaia grew up in an atmosphere of luxury and glamour, accustomed to constant attention from the press quickly. The paparazzi hunted for pictures of a pretty girl, who turned out to be a small copy of Cindy.

And the parents themselves were not against to show the world their beautiful child. In 2006, the public turned against the model for a series of pictures of the baby in the advertising campaign of children's swimwear brand Melissa Odabash. The fans were outraged by the fact, that Kaia had tattoos on the skin.

Star friends also did not understand the spouses Gerber-Crawford. George Clooney, for example, said that he would prefer to raise children in silence. And only Donatella Versace supported her friend. She was the first, who saw in Kaia the future star of the podium.

The designer categorically stated that "the camera loves Kaia," and persuaded Cindy to agree to the participation of her daughter in the teenage collection of the fashion house "Young Versace." The girl was only ten years old and she enthusiastically accepted the news because she dreamed of being on her mother's place from early childhood. She wanted to dress up in beautiful clothes, pose for the cameras and walk on the catwalk. Kaia acquired a taste for a model life quickly.

"I like shooting so much that I do not even perceive them as work. I'm always on the move, I do not have days when I sit on the spot and do nothing," the schoolgirl admitted.

Among the bright children's campaign, where Kaia was involved, was "Kid Royalty" in CR Fashion Book, where the girl starred with her brother Presley.

The countdown of Gerber's professional career begins with the conclusion of a contract with the star modeling agency IMG Models. Kaia was 14 years old then. Two years later, in 2016, Cindy's daughter starred in an advertising campaign of accessories for the American brand Chrome Hearts. Kaia was the youngest face of the brand, replacing the sisters Gigi and Bella Hadid.

The aspiring model appeared in the film Sister Cities and was on the cover of the French "Vogue" together with the star mother the same year. And the first "solo" photo of young Gerber decorated the cover of the magazine "Love." By the way, Kendall Jenner made this portrait; Kaia will have to meet her in the future on a fashion site.

Of course, Crawford coordinates the career of her daughter. Cindy filtered a lot of offers skillfully and competently, which filled up the ascending model. The first serious work of Kaia was cooperation with the luxury brand Marc Jacobs Beauty.

"I was very excited when I found out that I would be the face of Marc Jacobs," Kaia recalls. - I got a call when I first got back from school. I couldn't believe it was true until the shooting started. It is one of the most pleasant memories!»

Gerber presented the spring-summer makeup collection of 2017 and appeared on the image of a star of the '80s with luxurious color arrows and a lush hairstyle. Marc Jacobs himself was delighted with the work and pictures of Kaia. Immediately after this event, the rising star was called «Model of the Year." For all her glamorous life, she remained a typical teenager, went to school and said that study for her came first.

"I almost do not talk to the guys about work," the student says. "I don't want to be perceived as a model."

2017 was the year of Gerber's debut on the professional podium of New York Fashion Week. The girl first demonstrated luxurious model data (she is 68 feet (175 cm) tall) in clothes from Raf Simons at the Calvin Klein show. Then she opened the show of Alexander Wang and it was no less impressive. The experienced mother gave her daughter only one tip before the fashion show:

"I don't want to see a girl on the catwalk with dead eyes and a blank face."

From the beginning, Cindy explained to Kaia that people want to see a person. And the young participant understood this point, judging by the demand for Gerber's participation in the shows of world brands. Since 2017, she has been participating in all major international shows in the US and Europe.

2018 started with huge success for the girl. Kaia was the face of the House of Chanel. The model began cooperation with the brand a few months earlier: she participated in the show of the collection "Chanel Métiers d'Art" in Hamburg in December 2017. And Karl Lagerfeld, fascinated by her, personally removed Gerber in the advertising campaign of bags of the spring-summer season in February 2018. Black-and-white pictures turned out to be incredibly expressive and sensual.

Lagerfeld and Kaia released a capsule collection in the summer of the same year, which included things in the style of a young star – teenage sweatshirts, crop tops, mini-skirts, etc.

"To work with Karl means a dream comes true. I think Karl Lagerfeld is a genius of our time. I am happy that I worked with him," Gerber commented.

Interest to her personal life grew up as quickly as her popularity. From the age of 15, the paparazzi periodically "caught" the girl in an embrace with young people on a walk or the beach in Malibu.

In 2017, the media wrote that Kaia has an affair with the 19-year-old musician Travis Jackson. But there was soon another information, the guy, model of tabloids, was the 17-year-old Fenton Merkell. The young man is also a model and the son of the actress Patsy Palmer, who, by the way, is a longtime friend of Cindy.

Instagram of Kaia is filled with photos of both personal and professional nature. Fans often discuss the figure of the model in the comments to the pictures. So, fans were concerned about the excessive thinness of the girl recently, suspecting the beginning of anorexia.

Now Kaia is engaged in a new advertising campaign Miu Miu Resort 2019 with models Kendall Jenner and Alexa Chung, actresses Gwendoline Christie and Rowan Blanchard. It was also previously announced that Gerber would be the ambassador of Yves Saint Laurent Beauté brand from 2019. Kaia Gerber’s total net worth is about $200 thousand.

The biography of the model promises to be rich and successful. Today Kaia has a team of professional managers and agents. But still, her main teacher in the world of high fashion is her mother, ageless Cindy, who is always with her.