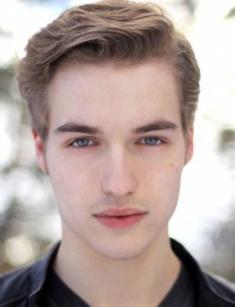 The Hollywood movie engine is not standing still; the process of finding new faces does not stop for a minute. This is the complex nature of popularity that it constantly requires new and new faces, even if the old ones are still afloat.

Trevor Stines is an American actor, young and not yet experienced, who will compete with the bison of The Dream Factory. He is also a model of those who are loved by the camera. This is what photographer María Jose Govea said about Stines, who works with many global brands:

"One of the prettiest faces I've ever seen!"

Trevor was born on 15 July 1995 in Olympia, the capital of Washington State. Parents served in law enforcement agencies. Stines has a brother. As the actor himself said, his biggest fan is his mother, Elizabeth. After his son got a role in the teenage drama series Riverdale, she bought all the Archie Comic the series was based on, then she told all of her friends about it and posted every article on Facebook about her son.

As a child, Trevor managed to travel a lot, from New York to Los Angeles. Out of this hobby he made a habit of establishing strong ties with people and with those with whom he would never have met in another situation.

Still in the school, the boy was interested in acting when he first participated in the production of Shakespeare's work A Midsummer Night's Dream in the sixth grade. To develop his acting skills, Stines began to participate in school productions, contests, played in more than a dozen plays and musicals. Moreover, together with a friend, he even wrote and staged two of his own musicals.

When Trevor grew up, the family moved to Los Angeles, where he later received the role of Jason Blossom in the series Riverdale, which brought him popularity. Apparently, his parents divorced, and his mother married again, Stines published a photo in the InstaStory app that confirmed this.

The actor's filmography is still relatively small, but maybe he will get an Oscar one day. Stines' cinematic career began in 2015, with an unremarkable role of Chester in the short film A Tragic Love Story, which tells the story of how young people overcome the obstacles in their quest to charm the girl of their dreams.

In 2016 Trevor appeared in the series of 4 seasons of the television drama series The Fosters. This series with many directors tells the story of a multinational, non-traditional family raising foster children, the problems they face, and the ways to solve them.

There are short movies Spen/cer in by Robert Cataldo and The Impasse of Light in the filmography of Stines. In Spen/cer, he played the role of Paul Watson, and in The Impasse of Light, Trevor portrayed Gans. The same year Stines starred in the horror movie The Amityville Terror. The movie tells the story of the Jacobsons family, who moved to an old house in Amityville.

Family members witness strange incidents that cause some evil. It turns out that the residents of the city keep an unknown secret. But when the Jacobsons are fighting evil spirits, the local population is somehow not rushing to help.

However, the young actor became popular and recognizable after the series Riverdale, or to be precise - the performance of the role of Jason Blossom, Cheryl's brother. In this role, starred another young actress Madelaine Petsch.

There's no exact information about Stines' relationships. The actor appeared on Instagram recently, but and almost every day he updates it with new photos. However, the photos are mainly about having fun, meetings with friends, photoshoots and his workouts. And according to the images with the actress Nicole Tompkins it is difficult to make a clear conclusion on what kind of relationship they are in.

The actor has a lot of hobbies: playing guitar, basketball, swimming, writing. But still acting is the main passion in Trevor's life. Stines is a fan of Robin Williams, Jim Carrey, Denzel Washington, James Spader.

Trevor keeps in touch with fans and does not refuse to take photos together. He often writes on his social media pages how important it is to have online communication and face-to-face meetings, how much fans mean to him and how much they inspire him.

In spring 2017, fans enthusiastically received the news of Riverdale's prolongation for the second season. Although Trevor's character on the plot is dead at the beginning of the story, fans hope for a different outcome. The second season went on TV on October 2017 and is broadcast on The CW channel.

The popularity of the series and its actors is only gaining in popularity. In any case, the series was awarded the Saturn Award as the Best Action-Thriller Television Series, as well as won the Teen Choice Awards in the Choice Drama TV Show category. A number of actors in other categories also won prizes: Lili Reinhart, Cole Sprouse, Camila Mendes, and Madelaine Petsch.

It is known that Trevor got the role of Ben in the second season of comedy and music series I ship it. The season premiered in the United States on 1 November 2017.

At present, Trevor's net worth is estimated at ‎$2 million.