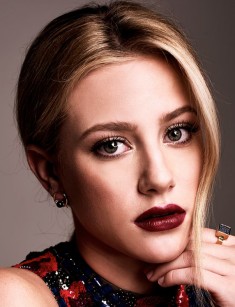 Fans of Hollywood cinema noticed that their favorite actors and actresses have twins - people who, as like as two peas. For example, actress Zooey Deschanel and singer Katy Perry, comedian Will Ferrell and the drummer of the Red Hot Chili Peppers Chad Smith, actors Jeffrey Dean Morgan and Javier Bardem and, of course, actresses Keira Knightley and Natalie Portman.

The future actress was born in Cleveland, the second largest city in Ohio (USA), on September 13, 1996. It happened. Lili Pauline is the second of three daughters of the Reinhart family. She has two sisters Tess and Chloe.

When Lili studied at Bay High School, she developed her dancing and acting skills. According to her own, Reinhart already knew who she wanted to become.

"It does not matter which profession you will choose when you grow up," her father told the girl, "the main thing is that it brings you pleasure."

Well, it happened. Already at the age of eleven, Lili signed her first contract with an acting agency. The young actress played her first roles on stage and in an advertising campaign and made her debut in cinema only in 2010.

Reinhart made her debut in a short film "Not today," released in 2010. A year later the second short film with the participation of the actress "The Most Girl Part of You" was released.

The first full-length film, in which Lili starred, was the horror "Lilith" by Sreedhar Reddy ("19 revolutions", "7 × 6 × 2"). This movie tells about a girl, whom the ghost of her dead sister Lilith brought to a real hell. It was released in 2011.

After "Lilith," Reinhart starred in the episodic role in the criminal series "Law & Order: Special Victims Unit," where she starred along with Mariska Hargitay, Christopher Meloni, and rapper Ice-T. Then there was the role in the comedy-fiction series "Scientastic.”

In 2012, the movie "Not Waving But Drowning" by Devyn Waitt with Vanessa Ray, Lynn Cohen, Adam Driver and Isabelle McNally was released.

A year later, Lili Reinhart starred in "The Kings of Summer" by Jordan Vogt-Roberts ("Death Valley," "You're the Worst," "Kong: Skull Island"). This film tells the story of three teenagers who decided to start an independent life and run away from home. In this film, the actress played a secondary role of a girl Vicki.

Then Reinhart again returned to short films, starring in "The First Hope” by Jeremy Allen White, which was released in 2013. Then there was a sports drama "Gibsonburg" by Jonathan Kimble and Bob Mahaffey. Also in 2013, Lili appeared in the thriller by J.C. Schroder "The End of Eternity."

In 2014, the young actress moved to Los Angeles - Lili repeatedly mentioned in her interviews that she wanted to leave the suburbs of Cleveland since childhood. In Los Angeles, Reinhart met Dara Gordon, who later became her manager.

The first work in the new city was the sitcom "Surviving Jack," in which Lili played along with Christopher Meloni, with whom she appeared in the series "Law & Order: Special Victims Unit."

In 2015, the actress appeared in the comedy-drama "Cocked" by Jordan Vogt-Roberts. In this film, the girl starred along with Sam Trammell, Jason Lee, Laura Frase, and Brian Dennehy.

A year later Lili starred in another comedy-drama - "Miss Stevens" by Julia Hart, which tells about a young teacher who went with her students to the Theater Festival. The star of the series "American Horror Story" Lily Rabe, Oscar Nunez and Timothée Chalamet also starred in the film.

After that, there was a period of depression – the actress had no friends, no money, no car, and she had a lot of debts. She even thought to give up acting.

Reinhart agreed to star in the thriller "Good neighbor" by Kasra Farahani ("Noon," "Tilt") to earn money for a ticket home. Lili starred along with James Caan, Logan Miller, and Keir Gilchrist. The thriller was successful but went unnoticed because of another film with a similar plot "Do not breathe" by Fede Alvarez.

Lili was already on the verge of going home and giving up her acting career. But her agent called with good news - he found a role for the girl in the upcoming series "Riverdale," which should have become a modern "Twin Peaks" for the young audience.

The actress realized that she had the honor to appear in the adaptation of the cult series of comics about Archie and his friends, which was released 75 years ago. Earlier these comic books were already filmed in the form of animated series.

Also, there appeared the series "Sabrina the Teenage Witch" with Melissa Joan Hart and the movie "Josie and the Pussycats" with Rachael Leigh Cook, Rosario Dawson, and Tara Reid.

Lili has relations with her colleague Cole Sprouse. In her free time, the girl likes to lie on a sofa with pizza, watching movies, or sunbathing on the beach. This hobby has appeared after moving to Los Angeles.

Reinhart loves "Instagram" and "Twitter" - with the help of these platforms she shares her thoughts and experiences. On September 11, 2017, the girl took part in the action "World Suicide Prevention Day," publishing her photo and post on the social network, in which she told how she struggled with such thoughts.

However, it's not the first time the girl asks her fans to stop making photos of her and her colleagues secretly, arguing that the actors have a personal life too. At the same time, Lili added that in 9 out of 10 cases she would be happy to take a picture with her fans.

It is also known that the actress had weight problems. However, inspired by the example of a plus-size model Ashley Graham, Reinhart stopped worrying. At the moment she weighs 55 kilograms with a height of 168 cm.

It is also known that in 2018 there will be released the criminal militant "Galveston" by Mélanie Laurent ("The Adopted," "Breathe," "Tomorrow"). The script was written by Nic Pizzolatto ("True Detective," "Killing," "The Magnificent Seven"). In this film, which tells the story of the struggle between the criminal and Mafiosi Roy Cady, Lili will play along with Elle Fanning, Ben Foster, Beau Bridges, and María Valverde. 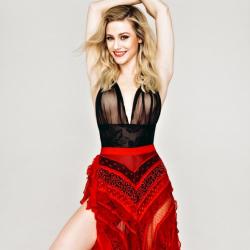