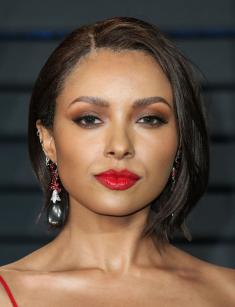 Katerina Graham (Katerina Alexandre Hartford Graham) is known for her role in the series The Vampire Diaries. The actress played Bonnie Bennett and won the hearts of millions of fans. Young and talented Katerina wins the cinematography, is engaged in producing, singing, learning the modeling business.

The actress Katerina Graham was born in Switzerland on September 5, 1989. She lived in Geneva a few years of childhood. Father Joseph Graham worked in the local media. Later the family had to move to the USA.

Directors loved Graham because of her exotic appearance. Joseph is from Liberia. The family moved when Katerina's grandfather began working as a Liberian UN Ambassador. The marriage of the parents Graham was unusual: the Liberian and the Polish girl Natasha with Russian roots.

It was already clear that the girl was waiting for a creative way, during her studies at Jewish school. Graham had time to attend sports training, theater clubs and she was interested in music at the same time. Katerina founded a music group at school and even tried herself as an author and a song composer.

Katerina began her acting career without finishing school. The aspiring singer was noticed at one of the concerts and was invited to the casting of the film Nancy Meyers The Parent Trap. Graham played in the same team with Lindsay Lohan, Natasha Richardson and Dennis Quaid. Kat got the minor role of Jackie.

The film was shot in 1998. Although the future star studied in Los Angeles in a music school, the successful debut of the young Katherine was the beginning of the actor's future.

Katerina Graham's career has been developing since 1998. First, she appeared in the episodes of little-known movies and TV series. There was a lot of work; the first notable was the comedy Hell on Earth. Kat did not get international fame after the role in the film but the American audience appreciated the talent of the young artist.

Katerina Graham's filmography includes dozens of paintings. In 2009, she played on the same stage with already famous Zac Efron. The fantasy of Burr Steers 17 Again made her the idol of American teenagers.

In the story, the loser father cannot establish a relationship with the family and continuously fails at work. By coincidence, one day Mike (Matthew Perry) wakes up at the age of seventeen. Kat did not get the main role in this movie. She was 20 years old at the time of filming.

The first serious work was noted in 2011. The image of a smiling schoolgirl is replaced by the role of Kim Johnson in the thriller The Roommate. The story of the director Christian Christiansen is shot in the best traditions of American horror: students witness frightening events and try to find the source of troubles.

The cast attracted the attention of young people (Leighton Meester, Minka Kelly, Nina Dobrev, Katerina Graham). The movie earned a lot of money after the premiere.

Katerina Graham found out the popularity of the international scale after appearing in the series The Vampire Diaries. The actress played Bonnie Bennett together with Nina Dobrev, a friend of the main character Elena Gilbert. The vampire series was popular among young people.

The 17-year-old Elena pays attention to the mysterious, handsome Stefan. The feelings flare up between them. The storyline is built around a love triangle: Elena, Stefan and his brother Damon.

There were many disputes around the series. But the excitement after the first season did its job. In 2016, many sources discussed that a friend of Elena (Nina Dobrev) would receive the main role in the seventh season. The audience was intrigued before the premiere but without details. It turned out that Bonnie and the Salvatore brothers expect a problematic relationship in this season.

The film crew worked on the creation of seasons for eight years. Today, Bonnie`s role of hereditary witch remains the most popular in the history of Katerina's filmography. In 2010, the actress was nominated for "Best Actress in a Supporting Role" at the Teen Choice Awards. Graham received this award next year.

The work on the set does not interfere with the musical career of Katerina Graham. Actress and singer combined The Vampire Diaries with concerts. One of the Graham's most popular songs is Put your graffiti on me. The girl records music at her studio. The singer as a backing vocalist went on tour with the group Black and Peace some time.

According to Katerina, it is difficult to choose one sphere. She is well-known equally in the world of film, music and dance. According to Graham, she is not going to leave music classes, act in movies or participate in filming for fashion editions.

The professional occupation in choreography helped the actress in the filming of the film Honey 2. Graham also appears in the clips of Justin Bieber and Nelly. She made videos for the singles Heartkiller and Wanna Say. In 2012, Katerina recorded the album "Against the Wall."

Graham met with Cottrell Guidry on the set of The Vampire Diaries in 2010. A couple of years later, young people wanted to legalize the relationship. The entourage knew about the upcoming engagement but Katerina never called Cottrell husband.

It is unknown why the marriage did not take place. They are silent about it. Graham has no serious relationships after parting with her groom. The latest news of 2017 says that the girl is alone, single and she has no children.

Like all stars, Katerina knows what the yellow press is. In 2017, there was the article, incriminating her in the use of drugs. Photos were showing the girl lying on the ground unconscious in TMZ. There were employees of law enforcement and medical staff in the frame. Sources put forward the version instantly: Graham`s fainting is associated with the use of marijuana.

However, the actress herself mentioned the incident on Instagram and the official representative denies the veracity of the incident. It was known that Katerina had a rest in the restaurant and felt badly. She went out into the fresh air but fainted. People did not discuss the story any longer; it was quickly forgotten.

It is little-known about Graham's life in 2018. The new projects are not planned (or they are not yet discussed). There are new photos with enviable constancy on social networks (Graham pleases subscribers on Instagram).

The media also publishes fresh photo material. The fashion world watches Katerina; people often appreciate the outfits of the stars from popular events on the network. People discussed a dress from Dior recently. The images of Kat and Ksenia Sobchak are very similar. Fans think that Katerina`s dress is better.