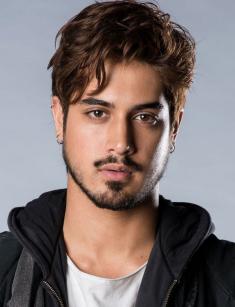 Avan Jogia was destined to become an idol of youth, especially of a female half. Plump lips, sometimes long hair, which suit him, Johnny Depp and Dmitry Malikov. There are often crazy experiments with hairstyles. A beard and mustache complement the resemblance to Captain Jack Sparrow. Also, he has the undoubted talent, for which he was awarded at the Teen Choice Awards two years in a row. Besides, the actor is known for his tolerant attitude and protection of sex minorities.

The future star of the TV series chose a beautiful and memorable with solid twos and nines – February 9, 1992, for the date of the coming into the world. His father Mike is Gujarati by nationality, the ancestors of his mother Wendy are of German, British and Welsh descent.

"I grew up in Vancouver, a liberal place, a Mecca for gays on the West coast. There is San Francisco and there is Vancouver," –the actor said.

In addition to his unusual appearance, the parents awarded the youngest son a unique name, Avan Tudor. He also has an older brother Ketan, the main participant of all boyish games and adventures in childhood and now a music producer and his sister Melissa.

The media diverge in the views of his education. Some argue that Jogia studied at Killarney Secondary School and then left it in the name of art.

Others, based on his confession, report that the child was taken from the educational institution by his parents and transferred to the home school. However, it did not prevent him from becoming a member of the school punk band.

Then the 17-year-old boy went to try his luck in Los Angeles, ambitiously deciding for himself that if he does not manage to gain a foothold in the cinema, he will return to his Canadian homeland. However, he had experience on television in 4 projects by this time.

The teenager had the first role in the TV movie at the age of 14. He played the younger brother Gwen Araujo, a young transgender girl who died at the hands of 4 men in the debut documentary. There was an offer to star in the comedy series Aliens in America as well as in the horror film Devil's Diary a year later.

In 2009 the press, critics and the public started talking about the performer who embodied the terrorist-sectarian Ben Stark, when the multi-series fantastic Caprica was released. His popularity was consolidated by the following project the youth Victorious, which was four times nominated for the prestigious Emmy Awards.

Avan collaborated with Victoria Justice in the project Spectacular!, Elizabeth Gillies and now his favorite singer Ariana Grande. Avan starred to star in 3 full-length films while participating in the series.

In 2013, his filmography was enriched by the movie Twisted, which brought him the first nomination for the Teen Choice Awards and soon the actor expanded his role to the ancient Egyptian Pharaoh Tutankhamun. The project Tut allowed Avan to get acquainted with the idol of early years Ben Kingsley.

"It is necessary to try to get to the truth in the movie Twisted as well as in the movie Pretty Little Liars but the history is more about the human relations and the arising tension between heroes. The series has a social message; it covers very topical issues," the celebrity shared his opinion on the work done.

Ghost Wars was released in the fall of 2017 and fans of the paranormal series were struck by the statement that it will not continue in the spring of 2018.

The bad artist, who does not dream of playing something from Shakespeare and Jogia has something to boast. There is A Midsummer Night's Dream in his biography, which is based on the work of the British classic.

The history of cinema knows many examples when a professional relationship develops into a romantic one. Jogia was repeatedly on this excellent list. In 2011, the press was aware that the Hollywood handsome man had a relationship with the blond actress Zoey Deutch. The couple had a strong relationship for five years and one music video for the song The New Division.

Then there was a rumor that began with a joint picture on "Instagram" that the guy had an affair with Victoria Justice. However, young people denied such statements, making it clear that they are only friends. However, it is not the only assumption, the girls of the actor were called Miley Cyrus and Ariana Grande and Daniella Monet at different times.

In 2017, Avan had a new girlfriend, sexy Australian Cleopatra Coleman, the star of The Last Man on Earth. They often pamper subscribers with joint funny photos (for example, dancing in a museum) on social networks, photo session for popular clothing brands (Calvin Klein), surprise with continuous experiments with color and hair cutting and do not hesitate to transform into heroes of picturesque masterpieces. For example, the hero René Magritte in the masterpiece The Lovers.

They do not talk about marriage and children. However, the guy is adamant about such an intimate question as the personal life:

"If I'm dating someone for five months and she's cheating on me, she is not worth. I'm not so attached to giving her a second chance."

He cannot stand deceivers and liars. Jogia is a passionate fan of painting and football (in particular, Arsenal English Club), iconic Iggy Pop and The Rolling Stones, tattoos that adorn his body and cheeseburgers. He speaks three languages and plays three musical instruments.

In 2018, three films with the participation of Jogia were presented to the audience. The comedy film Now Apocalypse was released on March 10, 2019. The actor did not forget to share the trailer with followers. The criminal movie Shaft with Samuel L. Jackson and Regina Hall was released in summer, the second part of Zombieland: Double Tap was released in autumn. Avan Jogia holds an estimated net worth of $1 million.