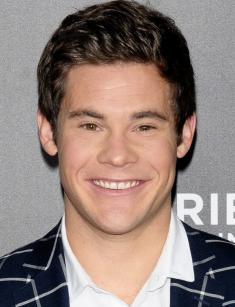 It is commonly known that laughing prolongs life. Some people even prefer to choose a profession connected with humor and comedy. One of them is the talented American actor, producer, comedian, screenwriter and singer, Adam DeVine. He became famous for his comedic roles and stand-up performances.

There is little information about the childhood of the comedian. Adam DeVine was born in Waterloo, Iowa, on November 7, 1983. Soon the boy moved to Omaha, Nebraska, together with his parents, Penny and Dennis. He graduated from Millard South High School in 2002.

DeVine had a tragic incident in childhood. In June 1995, while walking across a street, the 11-year-old boy was hit by the 42-ton truck. The child was immediately taken to the hospital, where he fell into a 2-week coma. Adam broke all the bones in both of his legs and had a collapsed lung.

For three years, DeVine did not leave the hospital, undergoing one operation after another. He was at very high risk of having to have his legs amputated, but the future celebrity could overcome all the problems. However, it took two years to regain full mobility.

When the enduring boy returned to school, children began to bully him due to the scars on his legs. Adam was wise and only laughed it off to divert attention from his illness. This situation helped the novice humorist realize that comedy could entertain and unite people.

After graduation from high school, the young man attended Orange Coast College together with his good friend and future co-star on the sitcom Workaholics, Blake Anderson. After graduation, Adam bought a one-way ticket to Los Angeles to test his strength as an actor and comedian in the large city.

In 2006, DeVine, along with his friends, Blake Anderson, Anders Holm, and Kyle Newacheck, formed the sketch-comedy group Mail Order Comedy. They performed on several venues in Los Angeles but found greater success on websites such as Myspace and YouTube.

The band also released a music video “Wizards Never Die” in April 2008. After the success of the first video “Mail Order Comedy,” on April 1, 2009, the music album Purple Magic was released, which contained 14 singles.

At the same time, Adam played several bit parts in the series Arrested Development, American Dad!, Samantha Who?, and the film Mama's Boy in 2007.

The American cable and satellite TV channel Comedy Central launched the comedy series Workaholics in 2011. The participation in the sitcom was a turning point in the career of the novice actor. Adam DeVine was not only one of the main heroes, but also the creator of the series and producer. The same year, the young man appeared in an episode of the sitcom Traffic Light on Fox.

In 2012, he appeared as Bumper Allen in the musical comedy film Pitch Perfect. Then he returned to the role of Allen in the sequel Pitch Perfect 2 (2015) and won the MTV Movie Award for Best Kiss (shared with Rebel Wilson). DeVine also tried his hand at a new activity when he voiced the character Pizza Steve in the animated series Uncle Grandpa which aired on Cartoon Network from September 2013.

In 2015, Adam played a bit part in the melodrama The Intern with Anne Hathaway and Robert De Niro in the lead roles. The film received positive reviews from critics and viewers. One year later, the comedian appeared in the comedy film Mike and Dave Need Wedding Dates, which told about two bone-idle brothers who needed to find girlfriends for a wedding celebration in a short period of time. The movie also starred handsome actor Zac Efron. This year, he portrayed Tyson Modell in the film Why Him?

DeVine’s filmography included two leading roles in 2018. He portrayed the title character of Noah Ashby in the romantic comedy When We First Met. Adam was also one of the executive producers of the project. Shelley Hennig and Alexandra Daddario took part in the film.

After that, the actor appeared as Alexxx in the comedy action movie Game Over, Man!. The film told about three loser friends working as cleaners and dreaming of getting rich. DeVine’s friends and colleagues, Anders Holm and Blake Anderson, also took part in it.

The comedian has no wife and kids, but he dates with his colleague, beautiful Chloe Bridges, better known for her role as Sydney Driscoll in the teen TV series Pretty Little Liars. The young woman is eight years younger than DeVine.

The couple met in 2015 on the set of the comedy horror The Final Girls. They immediately found common ground and communicated a lot beyond working hours.

Although the young people did not tell about their relationship, people could understand that their photos on Instagram were not only friendly. Adam and Chloe actively went on dates to Disneyland, attended basketball matches and concerts.

The actor had dated one more colleague before. He met his girlfriend, Kelley Jakle, on the set of the film Pitch Perfect. When they participated in the continuation of the musical film, the young people had already separated.

Nowadays, the star portrays a loser wizard named Andy Tuckerman in the Walt Disney family movie Magic Camp. The film is scheduled to be released in 2019. The comedian also visited the cities of USA and Australia as a part of the Weird Life Tour 2018, his latest major multi-city standup comedy tour.

Adam DeVine has also appeared in the Netflix comedy melodrama Isn't It Romantic. After the release, the actor said in an interview that he wanted more queer movies that did not focus on how difficult it was to be gay.

Adam DeVine has a net worth of $8 million.