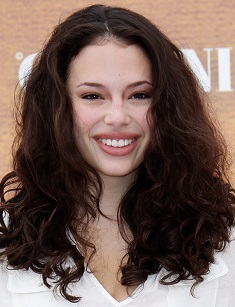 Chloe Bridges is an American actress, known for her roles both as a teen and an adult. She also has some talent in the social media sphere, since her Instagram account is a very cozy and amicable one. Although Chloe starred in many works for today, her significant roles are just ahead!

Chloe Bridges was born on the 27th of December, 1991 in a small city in Louisiana. There is no information about either the names of her parents or who they were. All that is available is their ethnicity: her father was from Honduras, and her mother was of English descent. However, there are also her maternal grandparents’ names presented; they were Virginia Walls and Franklin Bridges. Chloe is the only child.

Although she attended a middle school in California, Bridges claimed that she is used to storms, since a hurricane occurred every week in New Orleans. Subsequently, she spent some early years in the most populous city of the state.

Later the family relocated to Burbank in Southern California. Bridges attended John Muir Middle School and was quite a nerd, according to her words. Although she participated in many auditions at that time, she managed to get a «Student of the Month Award» and was considered a nerd (or, perhaps, this was just what Chloe said in the interview, but not an evident truth). Whatsoever she also confessed that was invisible during high school, which is pretty unusual for such a beautiful girl, whose face appeared on many screens. Nothing is known about a high school Bridges attended, but obviously, she graduated with a very good diploma, so she had an opportunity of enrolling at Columbia University, which was located in Manhattan.

Bridges began her movie career as Chloe Suazo, and in 2005 she starred in Freddie, which is an ABC sitcom created by Freddie Prinze Jr. The show was based on his real life and also featured his niece, Zoey Moreno, whom Chloe portrayed. Although Freddie lasted for only one season, it brought enough recognition to Bridges to continue with good projects.

In between the auditions, Bridges took part in multiple commercial, for instance, ones for Adelphia and AT&T.

Probably the most intense disappointment Bridges felt was when she realized how popular Camp Rock (2008) turned out to be. Camp Rock is an original Disney channel product that was aired on TV, but gained a lot of recognition and still has a massive fanbase of music lovers. The thing was that she auditioned for the leading role of Mitchie Torres but eventually lost to Demi Lovato. With no offense, Lovato played her character, a teen girl with high aspirations and little money, tremendously and formed a super-hit duo with Joe Jonas. Without hesitation, one might say, that this role was crucial for the development of her career.

In 2009 she had minor roles in Hollywood movies. The first one was a spin-off of Reese Witherspoon's commercially successful film series Legally Blonde. Another movie, Forget Me Not, is less known. It is a mystical horror film, featuring the same old story of demons, curses, and transformation. Trying himself of herself in various genres is always a great opportunity for any actor.

Eventually, Bridges appeared in Camp Rock 2: The Final Jam (2010); she was cast as Dana Turner, a daughter of an opposing camp. She received love interest from the brother of Mitchie’s boyfriend and took part in some main songs, truly showing her teen beauty.

Chloe was also involved in such hit as Sex and the City. She secured the role of Donna LaDonna in a CW’s prequel The Carrie Diaries that featured Carrie Bradshaw's high school years. Bridges portrayed the most popular girl at school, who tried to win over the guy Carrie had a crush on. However, Donna turned out to be not only shallow but understanding and warmhearted, as she protected the reputation of Walt, the boy of her and Carrie’s love interest, who finally came out as gay.

She stayed on the TV show for two seasons.

In 2014 Chloe had her first main role in a comedy film Mantervention. The same year Bridges got a recurring role in Pretty Little Liars, which aired on ABC Family. It is a widely-known teen mystery thriller since there are not a lot of works in such a genre. The actress portrayed Sydney Driscoll, a new girl in school and a great swimmer. She interacts with the main characters a lot in the fifth season and also returns in a five-year-break.

In 2015 Bridges appeared in two thrillers, The Final Girls and Nightlight. The role in the first one led to not only a point on her movie list but to something bigger, that would be revealed later.

The next year Bridges landed a role in a satirical ten-episode drama Daytime Divas. The work for the show required a lot of dramatic talent, which Chloe successfully demonstrated. Daytime Divas featured a story of one TV show with several hosts, that were friendly on screen, but had a complicated and rival relationship in real life.

In 2018 Bridges made a guest appearance in the web series Insatiable. The series itself was exciting and learning since it told a story of a girl struggling with bullying. At first, she was overweight which served as an excellent reason for school know-alls, but then she returned after the summer break completely changes and even wanted as a pageant contestant.

Probably, one might have mistaken Chloe Bridges for Chloe Bennet, an actress, and Logan Paul’s ex-girlfriend, so here the correction is required.

Bridges had several star boyfriends. From 2009 to 2011 she dated Codey Linley, who is most famous for his role in Hannah Montana and as a member of the TV series Dancing With The Stars. Moreover, the guy also took acting classes with Selena Gomez.

The next year after the breakup with Linley Bridges got together with Daryl Sabara, who recently married Meghan Trainor, a famous singer.

Then Chloe took a three-year-break until she met the one. However, during this time she was noticed with Josh Hutcherson, The Hunger Games star, who drove the chopper with her sitting in the back. Besides they have some photos together on Instagram. Perhaps those were just rumors about their affair, because since when people in Hollywood can’t spend time together only as friends?

So, back to the determining meeting. It was the filming of The Final Girls, where she met Adam DeVine, her future inspiration and best friend. Although they spent no time on screen together, but discovered a perfect match in each other and started dating. According to various sources, the couple is genuinely in love. Chloe isn’t just a sexy date every man dreams of, but she also respects Adam’s job and promotes his works via Instagram, thanks him, goes out to the NBA games, etc. There are a lot of their photos in the Net, including the hot bikini ones.

Their last trip to Europe might have ended with a proposal, but DeVine claimed that he didn’t get the signs and lost the opportunity. Perhaps, he might take another try in a more romantic place, such as a restaurant near London’s Tower Bridge.

At present, Chloe Bridges has a net worth of $1.5 million.