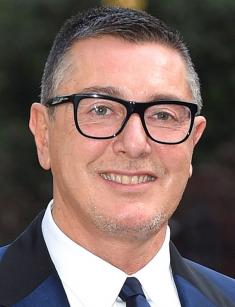 The co-founder of the largest Italian fashion house Dolce & Gabbana, Stefano Gabbana is one of the 1000 richest people in the world. His wealth is both material and ideologic. The man continues to create unique collections of clothes and accessories with his former partner, Domenico Dolce. However, some critics predict that the brand’s popularity will go down soon due to Stefano’s scandalous behavior.

Stefano Gabbana was born on November 14, 1962, in Milan, the fashion capital of Italy. The boy’s father worked at a printing office, and the mother was a laundry woman. Both parents came from the province of Venice.

Little is known about the man’s childhood and youth. Apparently, he took an interest in art and design early: he finished the Istituto Superiore per le Industrie Artistiche, the design institute, and started working as an assistant in a tailor’s shop in Milan. At the age of 18, he met his business partner, colleague, and lover Domenico Dolce.

The young people met when they studied at Giorgio Correggiari’s store. The designer did not contribute much to fashion, but he helped develop the largest trendsetters’ taste. In 2013, after Correggiari’s death, Gabbana marked that:

“He was not very famous. But for us he was important. He taught us especially what 'not' to do”.

In 1983, as soon as the young people learned enough, they left. For some period, Stefano and Domenico worked separately. Sponsors were not interested in their sketches, and there was not enough money. As a result, the Italians united their brands; the name “Dolce & Gabbana” appeared.

The talented designers created dozens of fine accessories and models of women’s clothing. They presented their works at Milano Collezioni's Nuovi Talenti (New Talents) project. In March 1986, the debuting collection “Real Women” came out. The next year, the first Dolce & Gabbana store opened.

The designers’ views on women different from the then trends. In 1989, models appeared in mini skirts and jackets with large shoulders in a fashion show in Tokyo; in comparison, the Italians emphasized romantic details: long hems, silk, leopard prints.

Gabbana remembered in his interview to Simone Marchetti (the editor of fashion magazines La Republica and Affari&Finanza) that he realized the company had no money, and the collection had to be sold; otherwise, Dolce & Gabbana would disappear from the world of fashion.

Fortunately, the show was successful; the designers switched to the United States. In 1990, the first show took place in New York; the Dolce & Gabbana showroom opened on Broadway.

The young people were looking for their niche in fashion: they presented men’s clothes, business accessories, wedding dresses, scarfs, swimsuits, lingerie. In 1992, the first Dolce & Gabbana Parfum for women came out.

In 1993, Gabbana and Dolce were recognized worldwide: Madonna asked them to create costumes for the world tour Girlie Show. Thanks to the queen of pop music, the Italians collaborated with Monica Bellucci, Kylie Minogue, Angelina Jolie, Victoria Beckham, and Isabella Rossellini. Some of them continue to go out wearing Dolce & Gabbana clothes.

The designers have been surprising people by their artistic intuition for decades; they created unique, memorable items. Their snow-white dress that Victoria Beckham was wearing at 2003 MTV Movie Awards is still one of the most discussed images in Hollywood.

By 2003, the designers had sold more items than Armani, Gucci, Prada, or Versace. They presented sunglasses, watches, shoes, and belts. The brand D&G was used for accessories while Dolce & Gabbana released clothes. These two names united only in 2011.

25 years after the foundation, the fashion house brought more than €1 billion annually; it was the most prestigious fashion company in the world. At the same time, money gave the designers some trouble: when they refused to declare their benefits, they were sentenced to a year and eight months of prison. According to the Italian law, a prison sentence fewer than three years is replaced by home detention or community service. However, the designers have not served the punishment yet.

In 2000, Gabbana and Dolce came out as gays and confessed they had been in love from the mid-1980s. In 2005, the couple broke up, but their fashion empire survived.

As Stefano said in his interview, work substituted children for Dolce and him; problems in relationships should not affect what they did.

Gabbana and his ex-boyfriend were considered icons of the gay culture. However, they unpleasantly surprised the LGBT community in March 2015. The designers promoted the traditional family with a man, a woman, and a child in comparison with same-sex parents; they also called IVF kids “synthetic”.

These ideas provoked an outcry among LGBT celebrities. Elton John, Ryan Murphy, and Ricky Martin boycotted the brand. Elton John supported IVF children on his Twitter page and argued that Gabbana and Dolce should be ashamed to have mocked at the miracle of the genetic engineering that helped millions of gay and straight couples make their dream come true.

After the conflict, Domenico Dolce took a neutral position; Stefano Gabbana continued to share his ideas. In his 2017 interview to Vogue, he protected sexual harassment and called sex the modern tendency while violence was only a speculation, in his opinion.

The designer’s favorite amusement is to terror celebrities on Instagram. Selena Gomez was one of the first stars whom the Italian insulted. When the Catwalk Italia channel published a collection of the singer’s looks in red dresses, Gabbana boiled over and commented:

Ariana Grande was another victim of the Internet trolling: Gabbana left nasty emoji to all her photos. The fashion blogger Chiara Ferragni also made the designer furious: she changed three Christian Dior dresses at her wedding, and the Italian called her choice “cheap”.

Stefano’s scandalous behavior and celebrities’ calls to boycott Dolce & Gabbana products have not produced much effect on the Italian duet’s talent.

The new fall-winter and spring-summer collections were presented before 2019. Basic colors and strict lines predominate, and flower prints and crystals decorate various items of clothing.