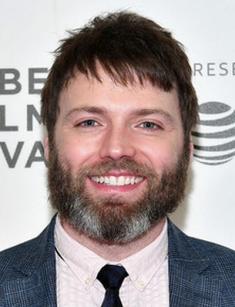 What another profession could choose a guy, who was born in Hollywood, has ancestors-actors. Of course, the profession, which is related to the movie. Gabel decided to become an actor and began a gradual movement to success in his youth. The greatest popularity brought His roles in the American TV series Dirty Sexy Money, Fringe, Salem.

Seth Gabel was born on October 3, 1981, in Hollywood, Florida, USA. It is known that the future actor was born in a Jewish family, was raised by his Italian stepfather and had his name Cosentino for a long time.

Later, Seth took his grandmother's name Gabel at the start of his career. He also paid tribute to his great-uncle Martin Gabel, the famous Broadway actor of the mid-XX century. He survived the abdication of his father to succeed in the creative profession.

"I love my stepfather but he also agreed with me that the guy with the Aryan appearance should change the Italian name," the actor admitted.

His close friend Josh Gad "instilled" him a passion for acting, Seth is his friend since a kindergarten.

"Even when he was an aspiring actor and I was just a shy boy," Gabel recalls.

At the age of 11, Josh persuaded his friend to go to a summer acting camp, where he was initiated into the mysteries of his future profession. Seth fell in love with this art forever. Both Seth and Josh graduated from University School of Nova Southeastern University in Davie. And after graduation, Gabel went to the prestigious New York University's Tisch School of the Arts.

One of his first works on TV was the cult TV series Sex and the City. In 2002, Seth co-starred in one episode, his role was unnamed and spelled out in the titles as "sweet young sailor": the blue-eyed blonde, who has an attractive appearance of the guy and is 5,8 feet (178 cm) tall.

And after two years, Gabel was "registered" on television for a long time thanks to the role in the famous project Nip/Tuck. Seth played Adrian Moore, the screen son of the heroine Famke Janssen and managed to win the hearts of millions of viewers for five seasons.

Gabel starred in a lot of series: CSI: Crime Scene Investigation, Law & Order: Special Victims Unity, The Closer, playing 1-2 episodes until 2006, a lucky chance brings him to the casting of Ron Howard's film The Da Vinci Code. The premiere was not without the participation of a novice artist. Millions of viewers around the world saw Seth in the role of a priest Michael.

The participation in the film, which collected more than $750 million at the box office, preceded the further success of the actor Gabel. In 2007-2009, he will play a regular role in the series Dirty Sexy Money with such famous actors as William Baldwin and Donald Sutherland.

The TV drama tells the story of a wealthy family Darling: the head of the clan Tripp Darling (Sutherland), his wife Letitia and five children. The hero of Seth is the youngest son Jeremy Darling, a spoiled reveler and rake, who, like the rest of the family, has his network of intrigues.

After playing four episodes in the youth series United States of Tara in the role of Zach, Gabel plunges into a new long-term project. The channel Fox launched a multi-episode film Fringe, the film is about a unique team of FBR agents, revealing the mysterious crimes committed on the "verge" of reality and fantasy. Teleportation, levitation, mutation are the usual phenomena of their expert life. Gabel joined the cast in the second season and played the agent Lincoln Lee, who studies werewolves.

Another work in Seth's filmography was the role of the Count Vertigo in the cult series Arrow. Gabel's character stands on the side of evil: inventing a super drug, he makes cruel experiments on people and eventually gets into a psychiatric clinic.

Gabel was approved for the role in the TV series Salem on the set of Arrow. The actor considers this project, which took place on the screens from 2014 to 2017 as one of the most interesting in his career. Seth plays the local aristocrat Cotton Mather, a war veteran, leading a witch hunt in Salem. It is noteworthy that the hero of Gabel has a real prototype, an American preacher, writer and scientist of the XVIII century.

Another transformation into a historical character takes place on the set of the series American Horror Story: Hotel. This project, which was a criminal and horror classic on television, presented to the audience the history of high-profile crimes related to the Hotel Cortez.

Seth Gabel played Jeffrey Dahmer, an American serial killer nicknamed the Milwaukee Cannibal. Dahmer killed 17 young men and men, whose corpses he raped and ate for almost four years. He was sentenced to 15 life sentences but was murdered by his cellmate shortly after his imprisonment in 1994.

Seth Gabel is known in Hollywood's cinematic environment as a man with an impeccable reputation. His personal life was never a cause for gossip. He met his fate, the actress Bryce Dallas Howard, the daughter of Hollywood director and producer Ron Howard when he was a student at the University.

The couple tested their feelings for five years: the actors became husband and wife only in 2006 in Greenwich, Connecticut. Now the couple has two beautiful children: Theodore Norman Howard-Gabel (2007) and Beatrice Jean Howard-Gabel (2012), whose godfather was a close friend of Seth, Josh Gad.

The celebrity is not one of those, who shows his family life; there are photos, related primarily to work on his "Instagram" (stealthgabel).

Since 2017, Gabel is busy on the site of the project Genius. Mini-series are demonstrated as a part of this series of an anthology, each of which is dedicated to a separate biography of an outstanding personality. Seth Gabel has a net worth of $2 million.

Seth starred in the stories of Albert Einstein and Pablo Picasso, playing the Swiss engineer Michele Besso and the French poet Guillaume Apollinaire. They are the latest work in the creative biography of the artist. Fans expect to see their favorite actor in a new exciting episode of the project in 2019.