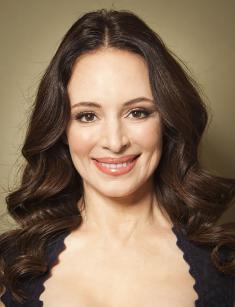 Madeleine Stowe is an American actress, the star of the TV series Revenge, as well as the films Closet Land, We Were Soldiers, The Last of the Mohicans, 12 Monkeys, etc. In 2012, the actress was ranked fifth on the list of People magazine's "50 Most Beautiful People in the World."

Madeleine Marie Stowe grew up in the town of Eagle Rock, a suburb of Los Angeles, California. The father of the actress, Robert Stowe, worked as a civil engineer, and mother Mireya Mora Steinvorth, an immigrant from Costa Rica, raised children. Madeleine also had two younger sisters.

Stowe was a reserved child. The girl resorted to cunning to avoid communication with peers. In the end, the girl found a way out. She announced that she wanted to become a pianist, and played the instrument for 8-10 hours a day. The famous Russian instrumentalist, Sergei Tarnowsky, became the teacher of Madeleine and taught the girl until he died at the age of 92.

By that time, the future actress was already 18 years old. Then she felt that it was the right moment to stop shrinking into herself. The girl deliberately chose a profession of journalist that required a high level of social skills and went to study at the University of Southern California. However, at the university, she found a new creative hobby and began attending a drama class. Soon, Madeleine was invited to the theater in Beverly Hills, where a movie agent saw her and got her several offers of appearances in TV and films.

Madeleine Stowe began acting in films at the age of 20. At first, she appeared mainly in television films, including the movie The Nativity, in which she performed the role of Mary, mother of Jesus. She made a breakthrough in her career in 1987 when a crime comedy Stakeout with the participation of Madeleine debuted at No.1 at the box office.

Then, Stowe starred with Kevin Costner in the thriller Revenge, as well as with Jack Nicholson in the crime film The Two Jakes. The next prominent movie was released in 1991. It was the psychological drama Closet Land. It is interesting that in the project there are only two characters, an interrogator (Alan Rickman) and an author of children's books (Madeleine), who is interrogated by a policeman.

The western The Last of the Mohicans and the thriller Unlawful Entry are also worth mentioning. By the way, according to critics, the role of a bold aristocrat, Cora Munro, in The Last of the Mohicans is significant for the actress because, after this film, they began to look at Stowe as a very talented actress. Surprisingly, just at that precise moment, Madeleine decided to have a career break and devote several years to her family. Although the filmography of the actress continued to include new projects during this period, these were bit parts and cameo roles.

In 1995, the actress got the leading female role in the fantasy dystopia 12 Monkeys, directed by Terry Gilliam. Madeleine Stowe’s partners on the set were Bruce Willis and Brad Pitt.

The film takes place in the future, in the 2030s, when humanity is on the verge of calamity due to the virus that killed 5 billion people. The only hope of humanity is to travel through time. The main character, criminal Cole, is selected to be sent back in time to find the moment when the virus was released and to prevent the tragedy.

In 1996, Cole was arrested and hospitalized in a mental hospital, where he meets his future assistant Kathryn (Madeleine Stowe).

The film distinguishes itself with the unique way of traveling through time. A traveler in time disappears from the new world after a certain period, so the film does not have an ordinary plot in which characters look for a lost or stolen time machine.

When the actress restarted the career, she had several good works such as the thriller The General's Daughter with John Travolta, the war action film We Were Soldiers with Mel Gibson, the crime comedy Avenging Angelo with Sylvester Stallone. Then she had the second break that was even longer. Since 2003, the actress has played such insignificant roles that many films have noteven been included in her filmography.

She returned only in 2011. Madeleine Stowe agreed to play the role of Victoria Grayson in the mystical television series Revenge. This multipart film was a great success and aired for four years, and Madeleine was nominated for such prestigious prizes as the Golden Globe and the Emmy Awards.

Madeleine Stowe played an ambiguous and mainly negative character. She portrayed a glamorous and domineering woman, the “queen” of the Hamptons and the sole matriarch of the Grayson family, who has dark past and numerous skeletons in the closet.

In the past, Victoria framed her friend, shifting the responsibility for organizing a terrorist attack that caused numerous deaths to an innocent person. The wrongfully convicted friend was killed in prison, but the conflict did not end there. His daughter (Emily VanCamp) came to the city down the years to find those who were to blame for her father’s death.

Despite the unique plot and excellent acting, which was highly praised, in the second season, the series faced the rating decline, and each episode began to receive critical reviews about the new storylines and casting. Nevertheless, Revenge was renewed for the third, and then for the fourth season.

The ratings continued to drop lower and lower, and after the fourth season, the series was officially closed.

Nowadays, Madeleine Stowe is not only a successful actress but also a happy wife and mother.

In 1982, Madeleine Stowe starred in the thriller film The Gangster Chronicles. On the set, the actress met actor Brian Benben, whose career was mainly connected with television projects. The same year, the couple got married, and since then, Stowe and Benben have happily lived together.

The family had a daughter, May Theodora. Some sources claim that the actress also has a son, whom the parents hide. So, no one can tell his name or the date of his birth, but Madeleine denies such information. The family lives on the ranch in Texas, near the city of Fredericksburg. They moved there in 2003, during the last break in Stowe’s career.

Madeleine is very sensitive to the problems of people in need. For example, in 2010, after the cataclysms in Haiti, the actress went to this island and helped people who were left homeless.

In 2016, the actress joined the cast of the popular post-apocalyptic series 12 Monkeys, a remake of the 1995 film of the same name. The actress played a minor role of Lillian in the second season.

Fans of this film consider Madeleine Stowe’s cameo appearance to be a “curtsy” to the original film because Madeleine played the leading female role in the full-length 12 Monkeys.

At the same time, there is no Madeleine Stowe’s heroine in the series. In 1995, the actress played the role of psychiatrist Kathryn Railly, and in the new 12 Monkeys there is only Dr. Cassandra Railly (Amanda Schull), who combines the features of Stowe’s heroine (an assistant of the traveler from the future) and Brad Pitt’s character (a virologist trying to warn people about danger). The heroine also has a significant name which means a mythical prophetess who was cursed by gods so that no one believed her.