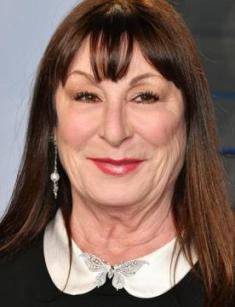 The American actress Anjelica Huston began to shoot in the 1980s and received the Academy Award for Best Supporting Actress for the movie Prizzi's Honor. However, a different role brought her international recognition: Morticia Addams in Barry Sonnenfeld’s The Addams Family. Besides, Huston is one of the few actresses who have shown their directing talent: she has presented three projects since the 1990s without any breaks in her acting career.

Anjelica Huston was born on July 8, 1951, in Santa Monica, California. The girl was the eldest child in the family of the director and actor John Huston and the ballet dancer Enrica Soma. The father had Scottish, English, and Irish roots; his father was a popular Canadian actor Walter Huston. John followed in the footsteps of his parents and devoted his life to the post-war cinematography; he was the laureate of the Academy Award, the Golden Globe, and Venice Film Festival.

Anjelica’s mother was Italian and stood out for her beauty. She worked as a model and got lead parts in George Balanchine’s famous troupe.

The would-be actress spent her childhood in Galway, Ireland, and attended a Kylemore Abbey school. In 1962, the parents divorced, and Anjelica moved to England with her mother to study at Holland Park School. 1969 was marked with the tragedy: Enrica died in a car crash, and the father took the family to the United States.

The girl had many siblings: the elder brother Tony, the half-sister Allegra (the child of Enrica and John Julius Norwich), the step-brother Pablo, and the half-brother Danny (the son of John and the actress Zoe Sallis).

In 1969, Huston gained her first acting experience in her father’s projects. A Walk with Love and Death is considered her debut: she played the 16-year-old noble Claudia. When the movie failed, Anjelica decided that acting was not her cup of tea. As the young woman moved to America, she started developing a modeling career and collaborated with fashion photography masters Richard Avedon and Bob Richardson; she was the favorite of the designer Roy Halston.

In the 1970s, the young talent took a substantial interest in cinematography; the famous drama teacher Peggy Feury. The role of the tamer Madge Gorland in Bob Rafelson’s noir drama The Postman Always Rings Twice (1981) was the first significant work. Jack Nicholson, who was the actress’s boyfriend at that period, co-starred with her.

The celebrities collaborated again in the movie by Anjelica’s father, Prizzi's Honor (1985). The actress personified practical and imperative Maerose Prizzi, the daughter of the mafia leader who fell in love with Nicholson’s character. Huston outshone the main character, Kathleen Turner. Hollywood critics expressed their admiration with the Academy Award which made Anjelica the third person in her family, after the grandfather and father, to win the prestigious prize.

Huston became incredibly popular, and directors showered her with her offers. The actress appeared in Francis Ford Coppola’s Gardens of Stone (1987), Charles Sturridge’s A Handful of Dust (1988), and Woody Allen’s Crimes and Misdemeanors (1989).

The role in John Huston’s drama The Dead was the most successful work of that period. The movie could boast many celebrities, but Anjelica’s acting manner was not something to miss among others.

The 1990s were marked with the peak of success. In 1990, the fantasy The Witches based on Roald Dahl’s tales came out. Huston personified the main magician, Eva Ernst. Still, it was only the preparation for the main work of the actress’s filmography: the role of Morticia Addams in Barry Sonnenfeld’s black comedy The Addams Family (1991).

Tall, well-built, and pitch-black-haired Morticia became the classic Hollywood image. The respectable mother, vamp woman, and dangerous opponent – the actress combined all these ambiguities in a splendid, unique manner.

“I decided on my friend Jerry Hall, the beautiful Texan model, feeling that her kind, gentle disposition and utter devotion to her children mind lend some warmth to Morticia’s chilly, unflappable nature”, the artist said about her work.

In the early 1990s, Huston was nominated for the Academy Award twice: Tamara Broder from Enemies, A Love Story and cruel Lilly Dillon from the thriller The Grifters.

In 1995, the woman met her ex Jack Nicholson in Sean Penn’s The Crossing Guard. The celebrities played a couple that lost their daughter in a road accident; the actress’s image was strong and dramatic.

The next year, Anjelica debuted as a director, just like her father. She created the TV version of Dorothy Allison’s novel Bastard out of Carolina. In 1999, the full-length movie Agnes Browne was released; Huston was a director, producer, and the lead actress there.

The story about an Irish widow left with several kids received many positive reviews; it was called the new interpretation of the tragicomedy genre. In 2005, another movie directed by Anjelica, Riding the Bus with My Sister, was presented.

The new century was marked with mostly secondary roles. In 2001, Huston co-starred with Gene Hackman in The Royal Tenenbaums; it was a great success. In 2010, the artist appeared in the comedy When in Rome with Danny DeVito and Josh Duhamel.

The star did not ignore television work. In 2004, she participated in the series Iron Jawed Angels and gained the Golden Globe Award for it. In 2008, she began to play Cynthia Keener in the series Medium. Overall, Huston’s TV roles brought her Emmy nominations five times.

When Anjelica was very young and lived in London, she had a passionate romance with the British actor James Fox.

Further on, the famous model got involved in the bohemian life in New York. 18-year-old Huston used to be the muse of the photographer Bob Richardson who was 23 years older. The couple lived four years together and split up when Anjelica met handsome Jack Nicholson, who had become a popular actor by that moment.

Nicholson and Huston’s relationship lasted for 17 years – the record for the Hollywood womanizer. Their life together was like a volcano: Jack could be absent for weeks and cheated on Anjelica, and the actress caused major scandals in the Italian manner.

The lovers split up in 1990 when the actress learned that Jack’s child from Rebecca Broussard was born. Huston, who had been tolerating the man’s cheating, decided to make it end.

The diva described the details of her relationships in Watch Me: A Memoir (2014).

In 1992, after the split-up with Nicholson, the actress married to the American sculptor of the Mexican origin Robert Graham. They lived together until the man’s death in 2008. Anjelica has no kids.

Despite her age, the actress looks beautiful, although some journalists accuse her of plastic surgery. She does not feel shy to appear in a swimsuit in front of cameras.

The celebrity continues to star in various projects. The military drama Waiting for Anya is one of her recent movies. Fans can also enjoy Huston’s acting in John Wick: Chapter 3 – Parabellum. Besides, the woman works as a voice actress.

Anjelica Huston has not forgotten directing: she has been studying the materials about the famous Irish revolutionary Maud Gonne and the poet William Butler Yeats.