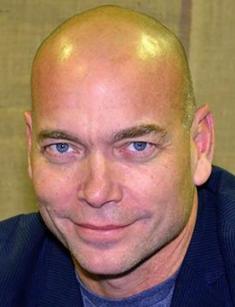 Jonathan Breck, an American theater and movie actor, became famous after the release of the thriller Jeepers Creepers in the early 2000s. Jonathan played the protagonist - a monster of alien origin, feeding on human organs. Two extensions of the American-German horror film also pleased the audience and brought the creators generous box office, and to Breck - worldwide fame and excellent prospects.

Jonathan Breck was born on February 17, 1965, in Houston, Texas. There is no information about the actor's parents and his family. Breck's career took off not so long ago. Most likely, Jonathan was brought up in a family with no actors, which did not prevent the guy from dreaming about the scene.

There is no information about where Breck studied and how he acquired acting skills, too. Researchers have yet to fill in the "white spots" of the artist's biography. It is known that the Texan appeared only on the theatrical stage until the mid-1990s.

This work did not bring fame to Jonathan Breck but opened the door to cinematography. The following year, the artist was invited to the sci-fi action movie Star Trek: Voyager. The series was broadcast on U.S. cable television from 1995 to 2001. The leading roles in it went to Kate Mulgrew, Robert Beltran, and Robert Duncan McNeill.

Thrillers I Married a Monster and Spiders, as well as episodes in the series, did not turn the American artist into a Hollywood star. The breakthrough in Breck's career happened in 2001, after the release of the horror movie Jeepers Creepers directed by Victor Salva.

Salva, famous for thrillers Something in the Basement, Powder, and The Nature of the Beast, starring Eric Roberts, Lance Henriksen, Brion James, and Sean Patrick Flanery, invited the little-known Jonathan Breck to star in a new project. The actor starred opposite Gina Philips and Justin Long.

In the center of the story of Jeepers Creepers is a struggle between brother Darry and sister Trish and the bloodthirsty monster, who goes hunting every 23 springs and eats people. The premiere of horror movie took place on July 2001 in Munich at the International Film Festival. In America, the picture was shown in August.

The project was more than paid off at the box office. The $10 million invested in the project turned into $60 million. The movie with Jonathan Breck was released on DVD in January 2002, but the final was shortened.

The director's success pushed him to shoot a sequel to the monster's story, and in 2002 the audience saw Jeepers Creepers 2. The movie premiered on May 2003. Breck remained in the role of the monster. Justin Long also appeared in the sequel. But this time, the actors Ray Wise, Nicki Aycox, and Luke Edwards came out in the foreground.

The appearance of Jonathan Breck's character in the star thriller is frightening. The bald head of Jeepers Creepers is covered with a farm hat, and the wings and sharp teeth make it look like a bat. The mysterious serial killer must eat human body parts to prolong his life.

Two years after the 2nd part of the release of the horror movie, fans saw the favorite actor in the sports drama Friday Night Lights, and in 2004 he also starred in the black comedy I Left Me, which was shown at the Sundance Film Festival. Jonathan Breck played the man and his clone. In 2007, the Texan appeared in the science fiction detective Dreamland, which was the first time he performed as a producer.

In 2008, Jonathan Breck starred in four projects: the British-American project The Dot Man and the American militants The Caretaker and Evilution. But the most prominent role, though the secondary one, went to the artist in a joint project of Australia, Britain, Germany, Hong Kong, and the United States. This is a biographical drama with elements of the comedy about Bush (original title W.) by Oscar-winning Oliver Stone. Josh Brolin played George W. Bush, and Elizabeth Banks played his wife, Laura Bush.

Is it easy for a beautiful blonde gray-eyed man of 6'1'' (1.85 m) tall to transform into a monster? Probably not easy. But Jonathan Breсk decided to play the role, recalling other starry transformations. Gary Oldman once played Dracula, Benicio Del Toro made up for Wolfman, and Hugo Weaving noted himself as Red Skull in Captain America: The First Avenger.

It's hard to know who lives in the heart of a 52-year-old actor. There is no information about Breck's wife or family. Jonathan does not have a website, and he does not have an account on Facebook or Instagram, but hus fans can look at his photos on fan pages.

Fourteen years after the release of the first thriller Jeepers Creepers, Victor Salva wrote the script and shot three parts. The premiere took place in America on September 2017. The movie takes place 23 years after the events in the first horror movie.

Already in May 2017, it became known that Salva wrote the script for the 4th picture, which would unfold immediately after the 3rd. What will be the cast of the sequel to the beloved audience horror - it is unknown, but the director has encouraged the fans of Breck that Creepers will play again.