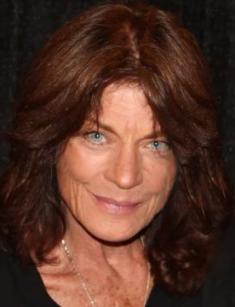 There is a number of actors and actresses who stand out from their colleagues because of their unique appearance. Ron Perlman, Tilda Swinton, Benedict Cumberbatch, Cara Delevingne, Vincent Cassel, Noomi Rapace, Cillian Murphy, Saoirse Ronan. The list can be continued for long, but it is worth stopping at Meg Foster, the actress with fantastic blue eyes.

The future actress was born on May 10, 1948. It happened in the city of Reading, Pennsylvania, U.S. Margaret, the full name of the actress, was one of five children of David Foster and his wife Nancy (née Adamson) Foster. Meg has one brother, named Ian, and three sisters: Nina, Gray, and Jan.

Almost immediately after the birth of Meg, her family moved to Rowayton, Connecticut, and later to Lowell, Massachusetts. It was in Lowell that Meg went to boarding school.

One day during the summer holidays, she decided to take part in the play John Brown's Body, the production of which was staged at Cornell University. Foster's reason for taking this step was simple: so the girl could try something new for herself, as well as make new acquaintances.

The performance was a great success. Although Meg played an insignificant role, her talent was noted and praised. Someone even advised the girl to consider the career in acting seriously. What Foster did. After graduation, she moved to New York City to study and perform at the County theater school.

While studying at New York University, Foster realized that she wanted to play both on stage and in feature movies that are shown in cinemas. Therefore, after receiving a diploma, the girl got on a plane and went to conquer the casting grounds of Los Angeles.

Meg Foster made her movie debut at the age of 22, in 1970, starring in the comedy Western series Here Come the Brides. This was followed by episodes of the cult detective series Hawaii Five-0, in which Foster could also be seen. In the story, a special unit of the Hawaiian police under the leadership of Lieutenant Commander Steven J. "Steve" McGarrett investigates unusual crimes.

In the same year, the aspiring actress first appeared on the big screen. Meg, along with young Michael Douglas starred in the drama Adam at 6 A.M. by Robert Scheerer (Hotel, Star Trek: The Next Generation, Father Dowling Mysteries). A year later, Foster participated in the crime series Cannon, telling the story of the detective of the same name, who was played by William Conrad.

In 1972, Meg took part in the filming of the science fiction detective series The Sixth Sense, which is devoted to the work of employees of the Department of Parapsychology-a large research organization. From 1973 to 1979, the actress starred in the popular series Police Story, filmed in the genre of crime drama with elements of action.

In 1980, Foster participated in the famous motion picture by Robert Kaylor (Derby, Nobody's Perfect) with Gary Busey, Robbie Robertson, and his namesake Jodie Foster. Also this year, she co-starred with Jeff Goldblum in the television production of The Legend of Sleepy Hollow by Washington Irving. The movie also turned out to be a walk-through-against the background of other adaptations of the cult Gothic work.

From 1981 to 1988, the actress starred in the detective series Cagney & Lacey, which tells the story of police partners who investigate complex cases, as well as try to manage their own lives.

During the breaks between seasons of Cagney & Lacey, Meg starred in movies. For example, in 1983, the cult movie The Osterman Weekend, shot by Sam Peckinpah (The Deadly Companions, The Wild Bunch, The Killer Elite) based on the script of Robert Ludlum, the author of books about special agent Jason Bourne, was on the screens in the whole country. Besides the action-packed plot, Peckinpah's movie also had a strong cast: Rutger Hauer, John Hurt, Dennis Hopper, and others.

1985 was marked by the release of the adventure thriller The Emerald Forest, directed by John Boorman (Point Blank, Deliverance, The Tailor of Panama). In the story, an engineer loses his son in the Amazon jungle during the construction of a dam. He would spend the next ten years of his life searching for him.

Two years later, Foster starred in the film adaptation of the animated movie He-Man and the Masters of the Universe, directed by Gary Goddard. Dolph Lundgren, Frank A. Langella Jr., and Courteney Cox worked with Meg Foster on the set.

In 1988, the legendary movie by cult director John Carpenter (Big Trouble In Little China, The Thing, In the Mouth of Madness), They Live, came out. The movie was about a builder who found unusual glasses showing the world as it was. Caustic satire with a fantastic twist left behind a great legacy-starting with quotes and ending with firms, named after the characters of the movie.

From 1989 to 1993, Meg Foster starred in the science fiction series Quantum Leap with Scott Bakula and Dean Stockwell. In 1989, together with her old friend Rutger Hauer, Megan Foster starred in the action movie, which was popular in the nineties, Blind Fury, directed by Phillip Noyce (Dead Calm, Sliver, The Bone Collector).

For the actress, the nineties were marked by trash movies: black comedy Shrunken Heads, thriller film Future Kick, which was a poor copy of the Terminator, starring Don "The Dragon" Wilson, as well as Oblivion and Oblivion 2: Backlash, comedy space westerns.

In terms of television series, things were slightly better. Meg played the role of Hera in the TV series Hercules: The Legendary Journeys (1995-1999) with Kevin Sorbo and in Xena: Warrior Princess (1995-2001) with Lucy Lawless. Children ran to the television screen to make sure they did not miss the new episode about the adventures of their favorite characters.

In 1999, Meg starred alongside Owen Wilson in the crime thriller The Minus Man, a movie about a maniac who kills people who are unhappy with their lives.

At the beginning of the new millennium, the actress took a short break to relax and reconsider some views on life. Meg Foster’s return was a success-fans immediately recognized the idol in the series Mentalist with Simon Baker and Pretty Little Liars with Shay Mitchell, Sasha Pieterse, Janel Parrish, and Laura Leighton.

Then followed several movies, on which she worked with Rob Zombie, The Lords of Salem, and 31. In them, the actress remembered the nineties: the beauty of trash and the enthusiasm of the creators, who managed to shoot something interesting almost without a penny.

The most significant motion pictures released by the end of fall 2017 with the participation of the actress were the horror movie Jeepers Creepers 3 directed by Victor Salva and the new season of the series Twin Peaks by legendary David Lynch. These projects managed to pull off a successful comeback after a long break.

Megan Foster was married to actor Stephen McHattie (The Rocket, Life with Billy, Mother!), but the couple did not live together for a long time.

Meg also dated another actor – Ron Starr (Ride the High Country, Mister Roberts, and Angels Hard as They Come), with whom Foster had a son, Christopher Starr. According to Foster, having a son is the best thing that has ever happened to her. On Instagram, fans are always interested in Megan Foster’s eye color and whether she wears contacts. In fact, the stunning blue is the natural color of her eyes.

Meg Foster has a net worth of $1 million. Judging by the fact that the actress was approved for at least two more projects, to the delight of fans, she does not plan to leave the cinema in the near future. In 2018, two movies featuring foster were released, horror Death Wish by Eli Roth and drama Crown and Anchor directed by Andrew Rowe.

Meg spends her free time at her ranch in northeast Washington. She bought it during her break from work, which she took in the early nineties. Megan Foster just saw the commercial for the land, looked at the attached photos, and just fell in love with that area.