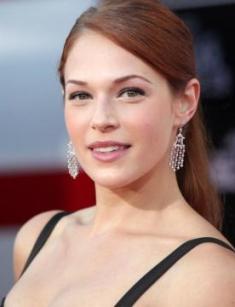 Amanda Righetti is an American actress and producer; the audience knows her as Grace Van Pelt in the crime series The Mentalist.

The would-be actress was born on April 4, 1983, in St. George. She grew up in Las Vegas in a large family: by the moment the girl was born, there were seven kids in the family.

Little Amanda participated in fashion auditions and became a model. As soon as the woman reached the legal age, she went to Los Angeles to work on her acting career. Initially, she did not have offers and got hired as an ad producer. Sometimes, the young talent appeared in commercial videos; insignificant roles in episodes of TV series followed.

In 2002, the movie Angel Blade on the similar theme came out. The next year, the artist played in the pilot of the series No Place Like Home which, unfortunately, was closed. However, Amanda was noticed; Fox invited her to the popular series The O.C. with Ben McKenzie, Adam Brody, Mischa Barton, and Rachel Bilson. She worked on the project for three years.

2003 brought success in producing: Righetti worked on the thriller The Gentleman Bandit directed by Jordan Alan and earned $40 000.

The melodrama North Shore about people working in a Hawaii hotel followed; the artist personified the main character, Tessa Lewis. Soon, Righetti appeared in the popular comedy series Entourage about a young actor’s (Kevin Connolly) career. She also played in Reunion and K-Ville.

The new producing project, the horror Pipeline, was significant for Amanda’s career; she worked on it as an actress as well. Jason Momoa played the villain. In 2007, the actress got a role in the crime drama Marlowe.

The movie Return to House on Haunted Hill gave Righetti the lead part. Her character, Ariel Wolfe, is engaged in the fashion world. Soon, her sister, Sara, dies mysteriously; she sent a psychopath murderer’s diary right before her death. A group of swindlers and somebody unknown begin to hunt the model.

Further on, Amanda Righetti played in an episode of the Hollywood comedy Role Models. As the story runs, two managers, Danny (Paul Rudd) and Wheeler (Seann William Scott) break the law and serve the community; they have to deal with disobedient teenagers at a school.

In 2008, the artist gained the role in the detective series The Mentalist; it brought her much fame and $75 000. Amanda personified Grace Van Pelt, the agent of the imaginary investigation bureau in California, for seven seasons. Owain Yeoman played the bureau employee and Grace’s lover.

The CBS channel broadcast the project. The main character of the drama, Patrick Jane (Simon Baker), a psychologist and manipulator, denies magic; he helps investigate mysterious crimes. The man has his personal reasons to do that: five years ago, Red John murdered his family. Robin Tunney and Tim Kang also starred in the series.

In 2009, Amanda expanded her filmography with another horror, Friday the 13th, and played Whitney Miller who goes for a walk with her friends and reaches an abandoned camp where a maniac used to live. The project grossed $91 million, but critics did not appreciate it.

The next year, the actress had the lead part in Wandering Eye. Maron Abbott meets someone via the Internet and goes to the first date to a hotel. As soon as she enters the room, she finds the young man dead.

In 2011, Amanda appeared as a S.H.I.E.L.D. agent in the Marvel superhero action Captain America: The First Avenger. The main character, Steve Rogers (Chris Evans), lives in Brooklyn and participates in the Second World War; he has to fight the Nazi officer Johann Schmidt (Hugo Weaving) nicknamed Red Skull. Besides, the actress appeared in the melodrama The Chateau Meroux and played a woman living in the province that produces wine.

In 2012, Amanda got the lead role in the series Shadow of Fear. The owner of a café Casey Cooper is chased by her former worker, Morgan (Will Estes). In 2014, the actress appeared in the series Chicago Fire about a fire department. The next year, Amanda played the main character in the thriller Cats Dancing on Jupiter and worked on it as a co-producer.

Amanda Righetti married the scriptwriter and director Jordan Alan in April 2006; the wedding ceremony took place in Hawaii. The husband is 16 years older than the actress.

At the beginning of 2013, the couple’s son Knox Addison Alan was born. When the fifth season of The Mentalist was filmed, the woman was pregnant. The creators of the series found a way out: the actress was shown from certain angles: she was doing paperwork, sitting at a computer, or driving a car. When it was time to give birth, Grace Van Pelt took a training course.

In 2016, Righetti joined the cast of the new project, the sci-fi series Colony about the FBI agents saving Los Angeles citizens from an unknown civilization that occupied the city. The ratings of the first two seasons proved to be worth the shooting expenses, and the series creator Carlton Cuse decided to continue.

2017-2018 were also marked with the TV movie Love at the Shore and the short movie Pastalight.