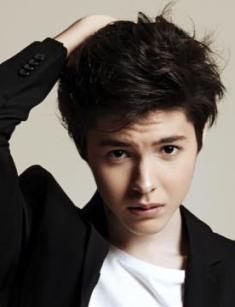 Kristian Kostov is a young Russian-Bulgarian singer who performs in the pop genre of music. He was the finalist of the first season of the TV show The Voice Kids Russia, as well as of X Factor Bulgaria. He took the second price in the Eurovision Song Contest 2017, representing Bulgaria.

Kristian Kostov was born in Moscow, the capital of Russia, on March 15, 2000. His birthday fell on the zodiac sign of Pisces. The mother of the young singer, Zaura, is a Kazakh. At the same time, Kristian's father, Konstantin, is a Bulgarian.

Kristian himself doesn't consider his family to be a creative one, which he mentioned in an interview in 2014. When he was asked about his parents' taste in music, he assured everyone that he was brought up on marvelous songs. His father enjoys the compositions of Frank Sinatra, Tom Johnson, Bryan Adams, Queen, and Elton John. His mother adores George Michael and his music, as well as Stevie Wonder and Ella Fitzgerald.

The boy was drawn to music art at an early age. That is why his parents decided to sign the boy up for the Moscow children's vocal studio "Neposedi" when the boy was hardly six years old. Participation in the creative life of this musical group predetermined Kristian's biography. Art fascinated the boy and became the meaning of his life.

So, by the age of 14, Kostov had a chance to perform in the Kremlin together with Julia Nachalova. Along with "Neposedi," they gave concerts within Russia, as well as outside it, and shone in front of millions of viewers in the opening night of Eurovision Song Contest in 2010 when it took place in Moscow. The next year, he became one of the winners of the Sound Kids international competition, receiving the Grand Prix. Thus, Kristian became a representative of the Jazz Parking production center. Here he got vast experience in performing live.

In 2012, Kostov, being the representative of Bulgaria, took seventh place on the famous Kids New Wave competition. In the same year, he received an invitation to the children's project developed by Lina Arifulina, School of Music. He ended up in the top three on this show.

In 2013, at the age of 13, Kristian Kostov decided to take part in the debut season of the television project The Voice Kids Russia. Public figures of the Russian music industry, Dima Bilan, Pelageya, and Maxim Fadeev were mentors of the kids on the show.

Kostov chose the song "If I Ain't Got You" by Alicia Keys for his audition on March 14, 2014. The successful performance of the hit on blind auditions brought him a chance to shine on the big stage. None of the mentors of the project could remain indifferent to his singing. However, Kristian preferred to work with Bilan and never regretted it.

The same song gave him a ticket to the final, where he performed the song composed by Rozhden, "You Know." However, the audience gave more votes to the opponent of Kristian Kostov — Leo Axelrod, who went to the super final to represent the team of Dima Bilan. According to Kristian himself, without such a mentor, he would not have become a finalist.

Successful performance at the Russian music competition contributed to the singer's desire to continue his musical career, and in 2015 he became a member of the project X Factor Bulgaria. After passing the audition, it became clear that Kristian was the youngest vocalist who took part in the fourth season of the show.

On the project, he performed solo as well as together with other contestants. At one point, Kristian Kostov sang the composition "Stolen Love" along with Darina Yotova. Besides, on the show's final episode, which aired on January 25, 2016, he performed the song "With God, My Love" together with Vasil Naydenov and took second place.

In the summer of 2015, Kristian Kostov released his debut music video for the song "Listen to The Rain," which was written by Natalia Pavlova. The video was shot in St. Petersburg.

In early October last year, the singer released another video for the song "You’re Not For Me." The author of the lyrics is Ventsislav Chanov, the music was written by Ray Hedges, Nigel Butler, and Isaac Evans. Vasyl Stefanov directed the music video for the song.

Kristian performed the song "Beautiful Mess" in the final on May 13, 2017. The song was written in collaboration with three composers: one of them is a Swede, the second — an Austrian, the third — a native of Bulgaria. A song dedicated to those who stand for what they believe in with all their heart was explicitly written for the contest.

As a result, 17-year-old Kristian took second place, losing only to the singer from Portugal Salvador Sobral. It is noteworthy that the young man won over all the favorites that the bookmakers made bets on.

Kristian Kostov participated in the tour after the Eurovision Song Contest. The news about the approval of his participation was a great gift for him on his 17th birthday. He shares his success with the public on Instagram. He also leads his Twitter account, where he shares his thoughts and point of view on acute issues. All the recent photos of the singer can be found on his social media accounts. Kristian loves to participate in fashion photo shoots, the guy changes his hair color, sometimes dying it blond or just getting some light strands. According to some sources, Kristian's height is 6 feet, and his weight reaches 165 pounds.

In 2014, the Internet and the press started to spread rumors about the affair between Kristian Kostov and the finalist of the project The Voice Kids Russia, Ragda Khanieva. At some point, journalists began to call Ragda his girlfriend.

However, Kristian himself denied this information in a blitz interview for his fan club. He assured his admirers that they were just friends.

Kristian Kostov's net worth is estimated at $100, 000 - $1 million. In 2018, some changes took place in the personal life of the singer. Kristian Kostov was noticed in the company of two-time silver medalist of the Olympic Games 2018 Evgenia Medvedeva. It is assumed that the young people met on a talk show dedicated to the Eurovision Song Contest. The couple did not fall out even when Evgenia had to leave for Toronto, where she continued her training under the guidance of Brian Orser.

The young ice skater talks to Kristian online. Even though the two people are still very young to think about marriage, Medvedeva intrigued admirers with a picture of a diamond ring which she posted on social media.

In January 2018, the singer was awarded the EBBA – European Border Breakers Award, as well as the Public Choice Award, which is given to the person for whom the public had voted. Kristian represented Bulgaria at the award ceremony.

The popularity of the singer determined the fast speed of his life. Kostov's fans have created a community "Team Kris," his performances are awaited in different parts of the world. In a week Kostov manages to visit three countries and give concerts there.

Kristian Kostov has a personal channel on YouTube, where the young man posts the latest recordings of cover versions of favorite songs, as well as footage from television shows with his participation. In the autumn the singer presented the hit "Depth," in six months the video has collected about a million views. Now Kostov is planning on releasing a mini-album, which is to be named "Get it." The premiere is going to take place on July 27.