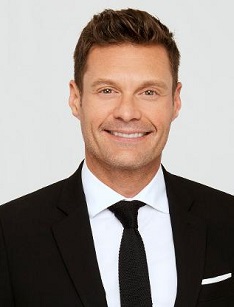 Ryan John Seacrest is an American radio personality, television host, and producer. He is mostly known as a host of the competition show American Idol, the syndicated countdown program American Top 40 (AT40), and iHeartMedia's KIIS-FM morning radio show On Air with Ryan Seacrest.

Ryan Seacrest's birthday is December 24, 1974 – he was born to the family of Constance Marie and Gary Lee Seacrest in the Atlanta suburb of Dunwoody, Georgia. When Seacrest was young, he already had inclinations to show-business.

As a kid, he studied at Dunwoody High School. There he was the school's morning announcer and got the nickname 'Voice of Dunwoody High School' due to it. His talents were noted, and he managed to get an internship at WSTR FM in Atlanta, with Tom Sullivan, where he learned new information about radio. Ryan worked with the WSTR until he graduated in 1992. Later he entered the University of Georgia, the faculty of journalism. He did not forsake his radio experience and continued with his show at a local Athens station.

The next year, Seacrest dropped out of the university to focus on broadcasting career and move to Hollywood.

The same year, he starred in the first season of ESPN's Radical Outdoor Challenge. In 1994 he started hosting the kid's game show Gladiator 2000 – he worked there till 1996. The next year, Seacrest was hired as a host of another kids' game show Click and of the fictional game show, Lover's Lane on Beverly Hills 90210.

In 2000, Ryan Seacrest succeeded to host Saturday Night at the Movies' and the NBC Saturday morning television block alongside Jimmy Fallon.

The next year, Seacrest got the place of the host of a television reality program, Ultimate Revenge. There the celebrity played practical jokes on family and friends, which were prompted by their own relatives and friends.

The crucial point in his career occurred when he started working on Fox reality television series American Idol. His colleague there was Brian Dunkleman. Due to the series, Seacrest gained national recognition and constantly rising fame. In the series' second year, Seacrest hosted it alone. That time the show was viewed by 26 million viewers. Once Seacrest was mixed up with a conflict with Katy Perry – he made bizarre comments to pop star and judge Katy Perry and provoked a heated argument.

In 2006, he was offered to sign a three-year $21-million contract with US Cable channel E!. So, he started hosting and producing E! News and its red carpet awards show coverage. In 2006, he launched his own production company - Ryan Seacrest Productions. Adam Sher was hired as the CEO.

2009 was successful for Ryan Seacrest – he signed a $45-million contract with CKX for American Idol. It made him the highest paid reality television host. Three years later, the celebrity signed a two-year $30-million contract to serve as the host of the show. Besides, he was signed to NBC Universal.

According to the contract's details, he remained as the managing editor of E! News and host to its red carpet shows. Additionally, his role increased as he contributed to Today Show, Olympic coverage, entertainment programming, as well as news and other special events. When Seacrest didn’t host the show, he was replaced by Bobby Bones.

Seacrest's production company produces the popular series such as Keeping Up with the Kardashians, Kourtney and Kim Take New York and Kourtney and Khloe Take Miami, Jamie Oliver's Food Revolution. In 2012, his organization started working with Melissa and Tye, which aired on CMT and Shahs of Sunset for Bravo and with Married to Jonas premiered on August 19, 2012. After Dick Clark's death, Seacrest hosted the 2013 edition of New Year's Rockin' Eve, along with co-hosts Jenny McCarthy and Fergie, paying tribute to Dick Clark in the pre-show.

Ryan Seacrest also entered into American radio. Before fame, he worked with unknown programs. Later he started hosting American Top 40. The show was syndicated by Premiere Radio Networks. Besides, he was hired as the host and the executive producer of Los Angeles radio station KIIS's morning show.

It is also known as On Air With Ryan Seacrest. In 2005 the celebrity succeeded to become the executive producer and the co-host of ABC's Dick Clark's New Year's Rockin' Eve.

Ryan Seacrest’s net worth is evaluated at $410 million. His salary per episode is a private information.

Ryan Seacrest had an affair with a professional dancer, actress, and singer Julianne Hough. The woman came to prominence after starring in the show Dancing with the Stars. The two started dating in 2013 and parted ways in 2013.

Nowadays Seacrest is in a relationship with model Shayna Taylor. She has been his girlfriend since 2017. Seacrest’s fans think she will become his wife.