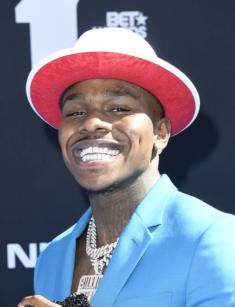 The Cleveland native, Jonathan Kirk, widely known as DaBaby, started his rap career in 2015 but got wide acclaim only in 2019. Over the years, DaBaby has released 13 mixtapes and two studio albums, Kirk and Baby on Baby. In 2018-2019 the rapper was involved in several legal issues. DaBaby is not married but has three children. His net worth is roughly estimated at $5 million, including all of his properties and earnings.

The birthplace of Jonathan was Cleveland, located in Ohio. He appeared to his parents on December 22, 1991. However, at the age of eight, Kirk’s family moved to Charlotte, North Carolina, where he spent most of his childhood. Kirk studied at the Zebulon B. Vance High School and graduated from it in 2010.

DaBaby is the rapper’s second stage name. In 2015, when he started his career, he was known as Baby Jesus. The rapper started his music way by releasing his debut mixtape, “NonFiction.” It did not become a hit, or rather, it failed, not received immense feedback. Three discreet mixtapes later, Baby Jesus, changed the name and issued his fifth mixtape In December 2016, titled “God’s Work: Resurrected.” The project provided a spark he was looking for.

The Cleveland native followed them up with his Baby Talk mixtape series. In January 2019, DaBaby, being signed to South Coast Music Group, inked a deal to one more studio, Interscope Records. And on March 1, 2019, he released his debut studio album “Baby on Baby.” It included 13 songs, featuring guest appearances from fellow rappers Rich Homie Quan, Offset, Stunna 4 Vegas and Rich the Kid.

That was the fundamental appeal of DaBaby’s music—it was aggressive, energetic, obsessed with forwarding motion. The rapper could turn a colorful phrase and sold rote ones through sheer charisma. There were no moody beat shifts or lofty gestures: DaBaby was not trying to be played in museums or at brunch. The album’s breakout hit was "Suge."

Followed the success of his album, DaBaby made guest appearances on tracks with Lizzo, Lil Baby, and YG. In August, the rapper announced a new project. He revealed in an interview with Beats 1 DJ Charlie Sloth that his second studio effort titled Kirk was due by the end of September. Revealing further details about Kirk, DaBaby said he had some big-name features in the bag. He reported he got a song with all three members of the Migos and something with Chance The Rapper.

DaBaby scored his first No. 1 album on the Billboard 200 chart as Kirk, released on September 27, 2019, opened in the top slot. The set started with 146,000 equivalent album units earned in the U.S. in the week ending October 3. Of that sum, just 8,000 were in album sales, as the set was powered largely by streaming activity.

On November 20, 2019, it was announced that DaBaby received two solo nominations (Best Song and Performance) for his song “Suge.” It became his first song to receive nominations. DaBaby had to fight in a category against such industry heavyweights as Cardi B, Nipsey Hussle and Offset. DaBaby reacted to the news on Instagram by posting pictures of all the best rap song nominees and adding: “From Grams to Grammys,” a popular hip hop phrase that referred to turning one’s life around.

DaBaby is romantically involved with the mother of his children, Meme. However, they are not married; they have been dating for five years. As of November 2019, the couple was waiting for their third baby. In an interview, Meme said that she met DaBaby about five years ago through mutual friends and officially became a couple once she got pregnant. The rapper shares a two-year-old daughter with Meme and is a father figure to her six-year-old son, Caleb. DaBaby showed himself to be an amazing father to both.

Jonathan’s dad name was James Curtis Kirkland, according to several sources. He helped inspire DaBaby to rap. James had a clear affinity for Hip-Hop music, as he was a DJ himself. In one of his obituary photos, Kirkland was captured practicing the craft of Disc-Jockeying on his turn-tables with headphones on. However, Kirkland Sr. was associated with drugs. DaBaby’s father death happened in 2018.

The rapper’s height is 5 feet 8 inches. His friend and business partner is Nigerian, and Dababy came out to support him on his wedding day in September 2019. A Nigerian friend is a secretive person. There was no information on him on the internet but some wedding pictures were posted on their Instagram.

In March 2019, DaBaby was charged with misdemeanor carrying a concealed gun. The Interscope rapper was the only person who had been charged in the killing, which took the life of 19-year-old Jalyn Craig. The incident happened at the Walmart on Bryton Town Center Drive on November 5, 2018. Police arrived on the scene immediately after shots were fired in the store and saw several people involved in an altercation. Craig was shot in the abdomen and died on the scene. Four individuals were taken into custody by the Huntersville Police Department for questioning.

Shortly after the incident, DaBaby posted a video and confirmed his involvement in the matter and said he acted in self-defense, and security camera footage would back up his story. He claimed he was confronted by two men who were wielding weapons while he was shopping with his family. In June 2019, DaBaby was found guilty of a weapons charge.

On May 19, 2019, DaBaby's security team was in big trouble because the man they viciously beat could die, according to his mother. The victim (his performing name was Don Trag) was in the hospital and a coma. The mother reported her son was performing in Lawrence, Massachusetts the night he was beaten. Don Trag's brother, who was also a rapper, said all Don Trag wanted was to take a photo with DaBaby when his security went nuts on him with a ferocious pounding.

On December 23, 2019, DaBaby was arrested after a concert in his hometown of Charlotte, North Carolina. The rapper was taken into custody for suspicion of possession of marijuana. However, he was released a few hours later and commented on the arrest via Instagram: "Dirty a** police department try to take me to jail every time I got a show in the city."

DaBaby also suggested that the Charlotte police department might have a personal problem with him. He explained: "Every time I do a show here. Every time. There's nobody when I pull up in the parking lot. The second I get out of the car, 15 cops come around. They follow me. They pull us over for no reason. They search for our cars. They treat us like animals."