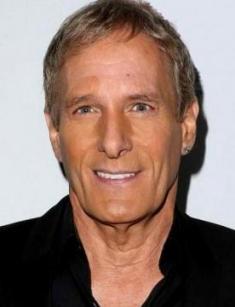 Michael Bolton is a famous American singer of the 1990s, a white soul performer, who became famous for his love ballads, as well as cover versions of classic soul songs.

The real name of Michael Bolton is Michael Bolotin. He was born on February 26, 1956, in New Haven, Connecticut, in a family of Jewish immigrants. His mother, Helen (née Gubin), was a granddaughter of a Jewish woman who left Russia. Other Michael’s grandparents were Russian immigrants.

Michael was the third and youngest child in the family. The parents also had son Orrin and daughter Sandra.

The musician recorded the first single in 1968, but Michael began his music career in 1975. Then he recorded the first album entitled Michael Bolotin. Critics and listeners could notice a strong influence of Joe Cocker on the beginning singer.

In his youth, Michael and his band Blackjack played mostly hard rock and even opened for Ozzy Osbourne on his tour. There were rumors that in 1983, Bolton auditioned for the lead vocalist of Black Sabbath, but the musician refuted them. Two albums recorded at that time went unnoticed.

Changing the name and surname to a common English one, Michael Bolton, the man wrote his first hit in 1983, becoming the co-author of the song "How Am I Supposed to Live Without You," which was performed by Laura Branigan. The woman took the song to number one on the Adult Contemporary chart for three weeks.

Later, the musicians continued to work together, and in 1985 Michael wrote the song “I Found Someone” for Laura. Her song did not succeed, but two years later, Cher resurrected the song, and with it her own singing career. Then, Bolton wrote songs for both performers.

Michael has made a name for himself as the author and performer of rock ballads. The first successful hit was a cover version of Otis Redding's classic song "(Sittin 'On) the Dock of the Bay." Redding's widow, Zelma, said that Bolton’s performance brought tears to her eyes because it reminded the woman so much of her husband.

Since Michael had long been interested in the soul genre, he made a cover of the song "Georgia on My Mind," written in 1930 by jazz composer Hoagy Carmichael. This composition performed by Bolton also became a smash hit.

In 1991, Michael released the album Time, Love & Tenderness, thanks to which he received the Grammy Award for a cover version of the song “When a Man Loves a Woman.” Another successful composition of this album was “Missing You Now,” which hit the US charts for several weeks. Actress Teri Hatcher starred in the music video.

Bolton, who initially proved himself to be a songwriter, also became a successful singer. The musician has performed with such stars as Ray Charles, Celine Dion, BB King, and even Luciano Pavarotti.

However, the singer’s career had also a black streak. Michael's covers of popular soul songs have earned not only the approval of fans but also the outrage of the admirers of the classic soul genre, who called his performance a fake. In 1994, the singer recorded “Said I loved you ... but I lied”, which became a hit, and later he faced a lawsuit.

According to the court, the singer’s 1991 composition “Love is a Wonderful Thing” plagiarized the Isley Brothers song, which they wrote in 1966. Although Bolton categorically denied that the song was plagiarized, he did not persuade the legal agents. The trial ended only in 2001. Michael was ordered to turn over large amounts of profits from the sales to the Isley Brothers, as well as 28% of the profits from the album Time, Love and Tenderness.

However, the court proceedings did not prevent the musician from developing his career. In 1997, Michael wrote another hit, “Go the Distance,” which was featured in the Disney cartoon Hercules and appeared on many charts.

After that, he didn’t have much success, although Michael continued to release albums. However, he didn’t quit his career in the music industry and even tried his hand at acting. In 2001, he appeared in the TV series O Clone, where the man sang the song "All For Love." In 2006, the singer released the album, Bolton Swings Sinatra. It missed the top 40 albums but sold at least 300,000 copies worldwide.

The musician has always been open for experimentation. In 2011, he sang a duet with Russian singer Alexey Chumakov. Bolton chose the song "Here and There." So, Alexey sang part of it in Russian, and Michael did it in English. The man highly appreciated both Chumakov’s singing abilities and the musical quality of the composition written by Alexey.

In 1975, Michael married Maureen McGuire. His wife gave birth to three daughters: Isa, Holly and Taryn, however, despite children, the couple divorced in 1990. After that, it was rumored that the musician dated actress Teri Hatcher for a while.

The following significant relationships in Bolton's personal life were a love affair with actress Nicollette Sheridan. The couple dated from 1992 to 1995. In 2005, after a 10-year break, the lovers reunited and even announced their engagement, but in 2008 they finally broke off the relationship.

Now Michael devotes a lot of time to charity. In 1993, he founded the Michael Bolton Foundation, later renamed The Michael Bolton Charities. The organization’s goal is to assist women and children at risk from the effects of emotional, physical, and sexual abuse.

In 2018, the artist announced that he was going to give concerts in the UK, including Birmingham in November.

On May 10, 2018, Michael told the press that his film American Dream: Detroit (Exclusive) would premiere in 5 days. The singer is a native of Connecticut, but has fallen in love with Detroit and wants to talk about its economic renewal. The documentary film features interviews with the most famous people in the city: Aretha Franklin, Francis Ford Coppola, Alice Cooper, and others.

Michael Bolton has a net worth of $60 million.