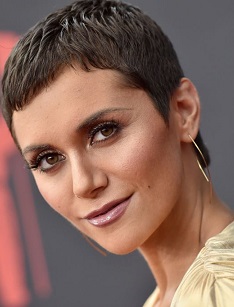 Alyson Rae Stoner is an American actress and singer. She is mostly known for her appearance in movies Cheaper by the Dozen (2003), Alice Upside Down (2007), and Camp Rock (2008). As a dancer, Stoner worked with Missy Elliott, Eminem, and Will Smith.

Alyson Stoner was born in Ohio in 1993 to LuAnne Hodges and Charlie Stoner. Alyson studied at the Maumee Valley Country Day School, and as a child, she fell in love with various sorts of dancing: ballet, breakdancing, jazz. Besides, the young girl attended the Margaret O'Brien Modeling Studio. In 2000, she won the Best Model award at the International Convention in New York. By the way, in childhood, Alyson looked like Anne Frank, one of the Jewish victims of the Holocaust.

Stoner’s musical career is connected to her acting one, and it all started with the Disney shows. In 2001, she started working as a co-host at the Mike's Super Short Show on the Disney Channel together with Michael Alan Johnson. In 2003, Stoner starred in the comedy Cheaper by the Dozen as Sarah, and in 2005, she appeared in the second part of the film. She also appeared in Disney projects The Suite Life of Zack & Cody (2005–2007) and That's So Raven (2005).

In 2006, Alyson appeared in Step Up, where also starred Channing Tatum. In 2007-2015, she voiced Isabella Garcia-Shapiro and Jenny in the animated series Phineas and Ferb. By the way, the actress belongs to the group of Behind The Voice Actors. In 2008, she starred in the Disney movie Camp Rock alongside with Demi Lovato and Joe Jonas.

Later, Stoner started making music, and in 2009, recorded a cover of the single Dancing in the Moonlight for the movie Space Buddies. In 2011, she began her work with record producers and vocal coach because she wanted to change her singing style and make it more adult. That year, Alyson released her first EP called Beat the System. Now, Stoner works a lot with Max Schneider, known professionally as MAX, and the guys often release their covers on various songs, including The Neighbourhood’s Sweater Weather, Maps by Maroon 5, etc.

Stoner had a lot of choreography classes in Los Angeles, and after this, she appeared in some music videos of Missy Elliott, Eminem, and Kumbia Kings. Alyson also was a background dancer for Will Smith at the show in 2005. In 2003–2006, she was a member of a dancing group named the JammXKids. For now, Alyson is a hip hop teacher at the Millennium Dance Complex, and she is considered as the youngest person among dance teachers.

Among other Stone’s occupations, there is writing: she worked as an editor for the KEWL Magazine, and she specialized on dancing. In 2009, the Alyson Stoner Project was launched, and it was about dancing too. The project was directed by Stone’s colleague, Kevin Schmidt.

For 2019, Alyson has a net worth of $1.5 million which she earned from her acting and singing career.

Speaking about Alyson’s love life, it has some changes. In 2018, the actress wrote an essay for the Teen Vogue, where she opened up about her sexual orientation. Stoner wrote the story about her first love with a female dance instructor, and hot it helped her to understand her identity.

When Alyson was 11 years old, and she was starring in The Suite Life of Zack & Cody, she started dating Cole Sprouse. He was her first love. Later, in 2009–2010, she was in a relationship with the actor, Vincent Martella. However, it is unknown whether Alyson is dating someone right now or not. A few weeks later, she was spotted with a beautiful ring on her finger, and there appeared a question: is the actress engaged?

This year, on July 6, Alyson’s colleague and a friend, Cameron Boyce who also was a Disney star, died in his sleep. Stoner and other actors spoke on their social media pages like Instagram and Twitter about Cameron’s impact.

For her acting work, Alyson was nominated for 12 awards, and she won four of them, including Young Artist Award for Cheaper by the Dozen (2003) and BTVA Voice Acting Award in 2012.