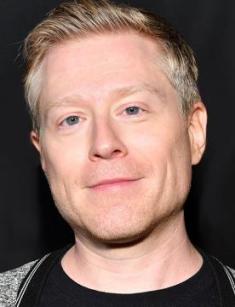 Anthony Rapp reached the movie stardom in the 1990s and has since managed to maintain his popularity. The American stage and screen actor starred in fifty movies, playing prominent roles in the Hollywood smash hits School Ties, The X-Files, the action movie Twister, that was nominated for the main movie award twice, and the four-time Oscar-winning film, the biographical drama A Beautiful Mind.

The actor was born in 1971 in Chicago but spent childhood and adolescence in Joliet, which is 60 kilometers from the metropolis. The parents did not live together for a long time. After the divorce, three children were raised by the single mother, nurse Mary Lee (née Baird). Anthony has sister Anne and brother Adam.

Anthony Rapp has wanted to perform on the stage since childhood. The boy enrolled in a theater club as soon as he went to school. In the summer, Rapp attended the Interlochen Arts Camp twice, where young artists improved their acting skills.

Anthony not only performed on the stage but also sang. He showed his singing skills in childhood. Upon graduation, the credentials of the young actor included awards and victories at singing competitions.

At the age of 9, Anthony Rapp played the first prominent role. The boy portrayed a title character in the musical based on the novel by Antoine de Saint-Exupéry. The production was a failure and was soon closed. Although it was not staged even for one season, the gained experience was useful.

The actor began an acting career in 1987. The 16-year-old boy, who regularly attended castings, landed a small role in Chris Columbus's crime-comedy film Adventures in Babysitting. The debut was successful, and since then Anthony Rapp has frequently filmed.

In 1989, viewers saw a red-haired young man in the thriller Far from Home, starring Matt Frewer and Drew Barrymore. Then the horror Grave Secrets and the family drama Sky High were released, in which Rapp got bit parts.

But the young actor became famous only in the early 1990s. In September 1992, Robert Mandel’s drama School Ties premiered. The film was named the best project about the 1950s.

The following year, a new movie hit was released. It was Chris Carter’s sci-fi drama series The X-Files, starring Gillian Anderson and David Duchovny. The series became a hit of the Fox channel and received a cult status. Viewers remembered the hero of Anthony Rapp, Jeff Glaser.

The same year, two more movies, featuring Rapp, premiered. These were the comedy Dazed and Confused with Matthew McConaughey and Ben Affleck and the detective drama Six Degrees of Separation. On the set of the film, Anthony worked with outstanding Donald Sutherland and Will Smith.

In the spring of 1996, the adventure thriller Twister premiered in the USA and was nominated for the Academy Award twice. Although the actor got a supporting role, his hero sank into the mind of viewers and film critics.

The 2000s were marked by Anthony Rapp’s role in Ron Howard’s movie A Beautiful Mind. The biographical drama about brilliant mathematics (Russell Crowe) caused a sensation and became a cult, having won four Academy Awards.

In 2005, the actor had a turning point in his life. Chris Columbus’s Hollywood smash hit Rent was released. The director cast Rapp in the leading role in the musical drama.

In 2017, the American actor appeared as Lieutenant Commander Paul Stamets in the sixth season of the science-fiction series Star Trek: Discovery and played in several episodes of the first season of the drama The Good Fight.

At the same time, the artist built a musical career. Anthony Rapp had begun singing before the start of an acting career. The star's debut album was released in 2000 and entitled Look Around. For the second time, the vocalist delighted fans in 2012, releasing the album Without You.

In 2012, Metro Weekly called Anthony Rapp "one of the first openly gay men on Broadway," although earlier, in 1997, in an interview with Oasis magazine, the actor described himself as bisexual, mentioning that he had relationships with women and men. The mother was the first person to find out about the sexual orientation of her 18-year-old son. Having become famous, the actor joined the fight for the rights of the LGBT minority.

At the end of 2017, the star of Rent and The Good fight exploded a bombshell that shocked his fans. Anthony Rapp said that in the mid-1980s when he was 14 years old, Kevin Spacey, who was 26 years old at that time, made a sexual advance towards him. The senior colleague called him to a party where he tried to seduce him under the influence of alcohol. Rapp managed to escape the rapist since Spacey was pretty drunk.

After a while, Spacey responded on Twitter that he did not remember the encounter that was 30 years ago, but if Rapp told the truth, he sincerely regretted his behavior. Having apologized to Anthony, the Oscar-winning actor came out as gay. Kevin has said that he has recently decided on homosexuality.

Anthony Rapp has a net worth of $2 million.