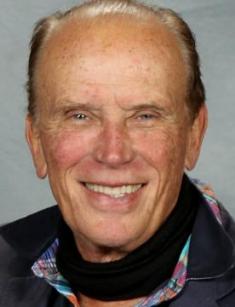 Peter Weller is an American actor and director whose outstanding look made people remember him. The audience often associates Weller with the robot police officer whom he played in the 1980s; the actor has been personifying both protagonists and antagonists for almost half a century. At the same time, he has a classic theater education and Broadway stage experience.

The would-be artist was born on June 24, 1947, in Stevens Point, Wisconsin. The boy’s father, Frederick Bradford Weller, was a military pilot; the mother, Dorothy Jean, kept the house. The family frequently moved when Peter was small; they even spent several years in Germany. When Frederick resigned, the Wellers settled in Texas. This is where the future star went to Alamo Heights High School.

As long as the young man graduated, he had to choose between music and acting; he selected a school of drama at North Texas State University but did not quit music and played the trumpet in a youth jazz band. Further on, Peter enrolled at the American Academy of Dramatic Arts. He used to perform on the Broadway stage for some time and then focused on television and cinematography.

In 1979, the young talent debuted in Richard Lester’s western Butch and Sundance: The Early Days; the project starred Tom Berenger and William Katt. Peter received a small part of a police officer Joe Le Fors. Although critics’ reception was ambiguous, the movie was nominated for the Academy Awards.

The role in Alan Parker’s Shoot in the Moon (1981) became the first significant work: Weller played the friend of the main character Faith Dunlap (Diane Keaton). Further on, the man had the lead part in the horror Of Unknown Origin by George P. Cosmatos. Although the review in the New York Times was full of criticism, the protagonist’s acting was appreciated.

1984 brought the iconic adventure The Adventures of Buckaroo Banzai Across the 8th Dimension; the director W. D. Richter offered Peter the main part of the young neurosurgeon and musician Buckaroo Banzai. However, the next project was marked with the real fame for the actor: it was Paul Verhoeven’s RoboCop (1987). Both ordinary viewers and movie experts liked the project; it won the Academy Awards and had two more nominations for it, as well as other prizes.

Arnold Schwarzenegger, Tom Berenger, and Armand Assante could have played the main character, but all of them did not have something that the director wanted. Besides, the role of Alex J. Murphy was challenging due to the costume size: not every person could fit in it.

Finally, the perfect candidate was founded. Peter Weller trained a lot to receive this part – he was not wearing the costume at practice, though. When the metal armor was delivered to the movie set, it turned out the artist’s endeavor had been in vain: it was impossible to move the way he had learned. More than that, Peter got claustrophobic in the costume, and the hot weather in Dallas worsened the satiation. The outfit was modernized in the second part.

The sequel RoboCop 2 was released in 1990. The second part was worse than the first one, and the actor decided to quit; Robert John Burke replaced him in the third movie. At that time, Weller participated in another project, the drama Naked Lunch based on William S. Burroughs’s novel. David Cronenberg was a director; Judy Davis, Ian Holm, and Roy Scheider personified the main characters. It is a mixture of the original work by the writer, his other books, and biographical facts. Critics welcomed the movie, but the commercial failure followed: Naked Lunch grossed only $2,6 million while its budget was about $17-18 million.

In the 1990s, most of the actor’s roles were secondary, and those projects were not successful. In 1995, Weller took part in the fantastic thriller Screamers, the action Decoy, and Woody Allen’s melodrama Mighty Aphrodite. Three years later, fans could see the artist in the thriller Top of the World.

In 2012-2013, Weller voiced the main character in Batman: The Dark Knight Returns.

Apart from full-length movies, the actor appears in various series, such as House, Dexter, 24, and Fringe. Since 1993, Weller has been as a director: he created Homicide: Life on the Street and some episodes of Sons of Anarchy, House, Outsiders, Rush Hour, and so on.

The man was a bachelor until his 59th birthday; his longtime acquaintant Shari Stowe became his wife in 2006. The wedding ceremony took place at the Santa Maria Assunta church, Italy.

The artist does not like to talk about his personal life. However, there are many photos of Peter Weller and his wife from social events. Shari is also an actress, but she has been less successful than her husband. The couple has no children.

Today, Peter Weller’s filmography includes dozens of movies and series that brought him the love of millions of viewers. Many projects can boast high ratings on IMDB. The actor also completed a Ph.D. in Italian art history.

In July 2018, it was announced that the director Neill Blomkamp was going to create the movie RoboCop Returns; Justin Rhoads was supposed to re-write the original script by Edward Neumeier and Michael Miner. Weller was going to star in the project but refused to do that in fall of the same year. Instead, he has had some short appearances in series in 2019.

Peter Weller’s net worth is estimated at $8 million in 2019.