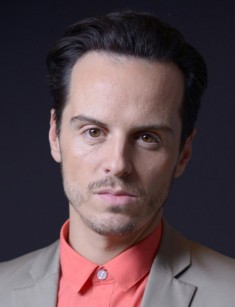 Andrew Scott is an Irish movie and theatrical actor who is known to the public by his role Moriarty in the TV series under the title Sherlock.

Andrew Scott was born in Dublin on the 21st of October, 1976, under the zodiac sign of Libra. Nora and Jim Scott who came from the region of Ohm in Northern Ireland are his parents. Jim Scott was working in the employment agency, and Nora was a teacher of Art at high school. Andrew was not the only child in his family: he has two sisters, Sarah and Hannah.

Sarah, Andrew’s elder sister, was deeply engaged in the sport and later became the sports coach. The younger sister of everybody's favorite Moriarty has decided to follow in the footsteps of her elder brother, and she tries her chances in the acting.

Andrew himself received his studies at Dublin Catholic school for the boys and already being a teenager, he decided to try himself on the theatrical stage. When he completed his studies, he entered Trinity College in Dublin. However, he hasn't finished his education because of his work in Dublin’s Abbey Theatre.

Dublin’s Abbey Theatre has become the turning point for the young actor. He was given the leading roles without any hesitations, and for the performance of each part, he got enthusiastic feedback from the audience and the critics. The movie directors soon noticed the talented young man: Andrew got the major role in the film Korea though at that time he just turned nineteen.

Later he got the episodic role in the well-known project of Steven Spielberg under the title of Saving Private Ryan. The movie was extremely successful though nobody remembered the actor Andrew Scott who performed the role of some insignificant character.

The actor’s cooperation with the director Carol Reis who has made up his mind to stage the classical play Long Day's Journey Into Night became the turning point in Andrew's career. This picture hasn't brought Andrew Scott the world recognition. Though, all the critics and directors have paid close attention at him. For his acting, in the play, Andrew has received Independent Spirit Awards in the category for Best Supporting Actor.

Later there began the shootings in the biographic drama under the title Nora which was released in 2000. In this picture, the leading role of the Irish writer James Joyce – was performed by the famous actor Ewan McGregor. At the same time of the development of his movie career Andrew Scott continued to spend a lot of efforts and talents to the theater, and in a short time, he managed to perform at prestigious London Royal Court Theatre as a part of the troupe in the play under the title Dublin Carol.

In 2003 the actor took part in the black comedy Dead Bodies and got the leading role. The Irish director Robert Quinn was engaged in the work on this project. Scott has impressed the public and his critics with his acting so much that he received the prize of Irish Film Awards for Best Actor. The well-known actors Cillian Murphy, Colin Farrell, and Aiden Quinn were nominated for the same award. At Berlin Film Festival Andrew's acting in the movie Dead Bodies received the prize of Shooting Star Awards.

In 2006 Scott appeared in the parody comedy mini-series My Life in Film for BBC channel and also has received the prestigious Lawrence Olivier Award for his talented acting in the play A Girl in a Car with a Man which was staged in the same Royal Court Theatre.

Not less bright and expressive was Andrew's acting in the play under the title Dying City staged by Christopher Shinn. This play was staged in the same famous glorified London Theater and was nominated for Pulitzer Prize. The actor has greatly embodied the images of twin brothers. And for his role in the play statement Aristocrats of the National Theater future performer of Moriarty's character got the prize of People's Choice Awards.

In 2009 Scott performed one of the significant roles in the play Cock in which Paul Jesson, Ben Whishaw, and Katherine Parkinson became his partners. This play has also received the prize of Lawrence Olivier. Later, he won the role in the detective series under the title of Foyle's War.

The actor’s work in the television series of BBC channel under the title Sherlock became the most significant work in his filmography. Benedict Cumberbatch and Martin Freeman also took part in this series. Andrew performed the role of Jim Moriarty. In 2012 he became the best supporting actor and received BAFTA Awards, and next year he became the owner of IFTA Awards.

By the way, the actor also met Cumberbatch on the movie set of another project – the cycle of screen versions of William Shakespeare’s historical plays under the title of The Hollow Crown. Scott has played the role of King Louis XI. Sam Mendes has directed this series. The cycle was shot in the traditions of the English dramatic art and received many awards and nominations.

In 2016 he the actor also took part in the famous movie Alice Through the Looking Glass directed by Tim Burton.

In April of 2017, there was premiered the touching melodrama This Beautiful Fantastic and where to find her directed by Simon Aboud. The director invited Jessica Brown-Findlay and Andrew Scott to perform the primary roles. The actors have managed to tell the amazing story of friendship and love which have become possible due to the autism of the main character. They have succeeded to do it delicately. There came out a kind of the British answer to the French movie under the title Amélie. The film This Beautiful Fantastic was met positively by the audience and movie critics.

The actor has also faced the topic of autism in the movie of Rob Brown under the title Silent Things. It's a short-length movie which tells about the deep relationship of two people with the autistic disorder.

The same year the drama The Delinquent Season came out on the screen. Cillian Murphy, Eva Birthistle and Catherine Walker also performed in this movie together with Andrew Scott. The history is focused on the two couples whose relations begin to getting worse one night.

Andrew Scott is an openly gay. He has made his coming on the 15th of November, 2013 during the interview with The Independent. The actor prefers not to talk too much about his personal life that's why he was concealing his nonconventional orientation for a long time. Though, Andrew hasn’t found it necessary to conceal his homosexuality or to invent some imaginary girlfriends. That’s why he mentioned that he was gay, as it was by accident.

Stephen Beresford is Scott's partner. Stephen is an actor and scriptwriter. In 2014 he shot the movie Pride, and Andrew appeared in one of the significant roles in this movie. By 2018 the men have been together for more than ten years. Their joint photos rarely appear on the web and only on their mutual friends' Instagram. The actor himself doesn't have a public page on Instagram. Though, he regularly publishes posts on Twitter.

Even though same-sex marriages are allowed in England, there is no information about the official registration of the relations of Stephen and Andrew. It's known that the couple doesn't have children.

Scott hopes that modern society doesn’t consider homosexuality to be the disadvantage of the personality, and perceive it as a fact.

Andrew confesses that actually, he is an introverted person. He will prefer to stay at home to any party. What about the actor’s hobby he goes to the gym and tries to do it regularly. However, the young man keeps in perfect shape – his height is 173 cm, and he weighs 67 kilos.

In 2018 he participated in the TV screen version of William Shakespeare's play King Lear shot by the request of BBC channel. Anthony Hopkins, Emma Thompson, Emily Watson, and other famous actors also took part in this project.

In 2017 there appeared the information on the web that in 2018 BBC channel would show the professional record of the sensational theatrical play Hamlet. This play staged by Robert Icke was long-awaited in London with special awe. Each time this performance was sold-out.

It’s noteworthy that the critics consider that Andrew Scott "has played" his rival Benedict Cumberbatch on the series Sherlock who in 2015 appeared before the public as Hamlet. In Scott's acting the critics note eccentricity, he enchants the public with his skills of demonstrating the extreme mental states. That’s why, Prince turned out to be vulnerable, confused and unfortunate. And Cumberbatch’s Hamlet is first of all the prince in his classical image.

For the role of Hamlet, Andrew Scott received the prize of Critics' Circle Theatre Awards in the nomination for Best Acting in Shakespeare’s Play.

All the fans of Sherlock series are concerned with the question of the series’ continuation. In 2017, during the interview, Scott talked that nobody was against the 5th season, but if the series was prolonged, it would be no earlier than two years later. And the creator of the series Steven Moffat has commented on it on the Comic Con 2017: he said that two years for the production of Sherlock were minimum. 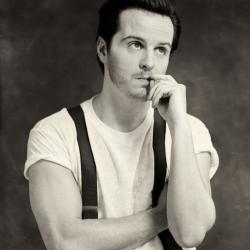