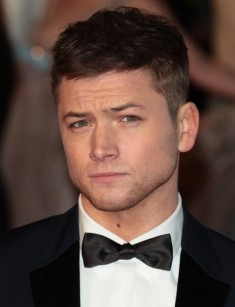 Taron Egerton is a talented actor, whose roles are a sample of sincere and real emotions. Bright characters and natural charm have attracted a lot of fans around the world who are looking forward to the new works of their idol.

The actor’s full name is Taron David Egerton. Taron is from the English town of Birkenhead. Although Egerton was born in England, the actor insists that he is a Welshman. The actor’s grandmother was born in Wales. Taron is fluent in Welsh and even speaks with a particular accent. By the way, the name, Taron, is derived from the Welsh word "taran," which means "thunder."

The father of the future star worked as a hotel manager, and his mother worked in social services. When Taron was born, the family lived on the Wirral Peninsula, but in a while, Taron's parents decided to move to a village called Llanfairpwllgwyngyll, in Wales, on the Isle of Anglesey. There the boy went to school. When Taron Egerton was 12 years old, the family moved again, this time to the city of Aberystwyth.

The actor speaks well of his school years. Taron admits that he was a restless and even an impudent boy, but teachers liked Egerton because Taron performed well academically.

From childhood, Taron has been interested in an acting career. Therefore, upon graduation, the young man entered the Royal Academy of Dramatic Art without hesitation. In 2012, Taron Egerton graduated with a Bachelor of Arts degree.

As it often happens, Taron's acting career began with a theatre stage. Taron made his debut in the production The Last of the Haussmans.

One year later, in 2013, Taron Egerton was invited to film. The actor got a bit role in a few episodes of the popular project Lewis. Taron did not become world famous or attracted fans, but the series allowed the novice actor to gain experience in cinematography.

A year later, Taron got the cherished leading role and, as a result, the opportunity to show off his talents. It was the series The Smoke. Taron Egerton’s character is Dennis Severs, a young man who tries to act like an adult. Teenage inferiority complexes make the young man reserved and unsociable, and his behavior is only a defensive reaction that hides Dennis's vulnerable soul. Taron portrayed quite a complex personality brilliantly. The actor showed the feelings and fears of the teenager, winning the love of viewers.

The next bright work of Taron Egerton was the drama Testament of Youth. The actor’s partners on the set were Kit Harington and Alicia Vikander. This film received positive reviews from rigorous film critics.

However, Egerton's starring role was another work. Many actors wished to star in Kingsman: The Secret Service. 60 people came to the auditions, each of them had talent and skills. However, Taron Egerton managed to stand out and prove to the director that he should get a role.

The director of the project did not regret such a decision because viewers liked the comedy action movie, and Taron Egerton, who played the marine, Eggsy, became famous overnight. The film also starred Sophie Cookson and Colin Firth.

In 2015, the crime drama Legend was released. This film about the crime bosses of the UK, the twin brothers Reggie and Ronnie, attracted the attention of viewers for a long time. Taron Egerton got the role of an unbalanced psychopathic gay, Edward Smith.

One year later, in 2016, Egerton pleased the fans with a leading role again. The touching story tells about an unlucky skier, who, in spite of the constant fails, achieved fame. The film became popular partly thanks to the talented acting of the young man. This film Eddie the Eagle (this is the nickname of the protagonist) won the title of the highest-grossing British film in the year of release. Inimitable Hugh Jackman, who played Eddie the Eagle’s sports coach, became the partner of Taron Egerton on the set.

The same year, Taron Egerton tried his hand at a new activity. The actor voiced a teenage gorilla in the animated film Sing. Gorilla Johnny dreams of becoming a famous musician and does his best to achieve this goal. The actor had not only to speak but also to sing. Despite such difficulties, Egerton did an excellent voicing job and proved once again that a talented person could do a lot.

It was not the only voicing role. In 2017, Egerton voiced a character in the touching musical cartoon Love at First Sight.

Taron Egerton’s personal life is a closed book for those who follow the news about the actor. Despite the publicity, he prefers not to tell about his love affairs. Journalists even assumed that the actor was gay, but Taron Egerton quickly dispelled the rumors.

The actor has admitted in an interview that he has recently suffered from loneliness, but now he dates a young woman and is happy. Taron Egerton keeps secret the name of the girlfriend. Therefore, fans of the handsome man (Taron’s height is 178 cm, and the weight is 79 kg) can only follow his Instagram account and other social networks, hoping that journalists will post the photos of their idol with his girlfriend on the Internet.

Now Taron Egerton continues to include new movies in his filmography, working on several films at the same time. In 2017, Billionaire Boys Club will be released. Besides Taron, Kevin Spacey, Emma Roberts, Ansel Elgort participated in the shooting.

Viewers will appreciate the film Kingsman: The Golden Circle also featuring Julianne Moore, Halle Berry, and even Elton John. This sequel has already been expected to become the smash hit.

Finally, one more film Robin Hood with Taron Egerton will be released in 2018. Otto Bathurst directed the film. 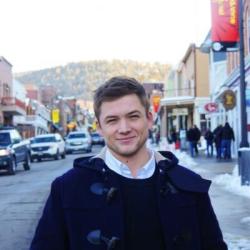