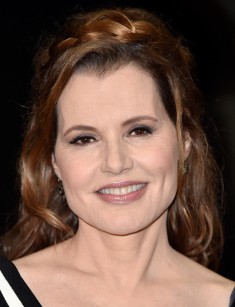 The Hollywood actress Geena Davis has achieved her peak of the popularity in the nineties. Her roles in the best-sellers The Fly, Beetlejuice, Thelma & Louise, and The Accidental Tourist brought the actress great popularity. For her secondary role in the melodrama The Accidental Tourist the star received Academic Awards. In 2000-s Geena reminded of herself with the bright characters in the series Commander in Chief and Grey’s Anatomy.

Virginia Elizabeth "Geena" Davis was born in the provincial Wareham in the State of Massachusetts in January of 1956. The parents of the future movie star weren’t connected with the art of the world: her mother worked as a teacher of the local school, and her father worked as an engineer.

Geena’s mother imparted her aspiration to the leadership and stubbornness on the way to the achievement of her goals. The girl delighted her parents with high marks and turned out to be the best schoolgirl in her class. The passion for reading and sciences will help Davis to become a member of Mensa – the oldest organization for persons with high IQ.

At school, Geena Davis demonstrated her skills in the music. The girl found the place to realize her skills and accompanied to the church choir. Sometimes she also sang solo.

Perhaps, at that moment Davis began to think about the acting therefore after she graduated from the school she went to Boston and entered the university. Here she has focused on the studying of the dramatic arts.

In 1979 Geena Davis received the diploma of higher education and went to New York. Here she began to have new opportunities which were promising the realization of her old dream.

The future actress began her path to the movie set with the signing of the contract with Zoli model agency. For a couple of years, Davis was working as a model until the masters of the movie industry noticed the beautiful woman with expressive eyes and charming smile.

In 1982 there was held the premiere of the sensational comedy Tootsie directed by Sydney Pollack. The picture received ten nominations for Academic Awards and the actress of the leading role Jessica Lange received the award.

The picture became the event of the year and the hit of the world hire. The spectators have also noticed Geena Davis whom Pollack had entrusted with the episodic role – the second nurse called April. Brilliant Lange performed the role of the first nurse. Dustin Hoffman, who was already the star in the world of cinematography appeared at the same movie set with the actress.

But unfortunately the actress didn’t begin to receive star roles after this successful debut: Geena Davis made a break in her creative career and became engaged in the family life. Three years later the actress changed priorities and came back to the movie set of the full-pledged movies.

We can't say that when Davis got married, she completely disappeared from the TV screens for three years. She appeared on the screens in 1983-1984 in the series under the title Buffalo Bill. In 1985 the spectators saw Davis in the full-pledged crime movie Fletch with Chevy Chase in the leading role.

The next year the actress had her triumph. Geena Davis received true popularity after the release of the sci-fi horror movie The Fly directed by David Cronenberg. The director entrusted Geena and Jeff Goldblum the leading roles. And Cronenberg also appeared on the screens in the image of the birth attendant. The horror with the slogan – Be afraid. Be very afraid, took the 42nd position in TOP-500 horror movie by the version of IMDb website. Geena Davis was nominated for Saturn Awards.

The year 1988 was very saturated for the American actress. She appeared at once in three and strengthened her position as a Hollywood star. In the black comedy with mystic elements under the title, Beetlejuice directed by Tim Burton's the actress appeared in the leading role in a company of Michael Keaton, Winona Ryder, and Alec Baldwin.

Davis and Baldwin embodied the image of the married couple of Maitlands who after their death turn into the ghosts. The spectators called Geena and Alec's acting "colorless," but Burton defended the actors, having explained their "dullness" on the screen with his director’s plan. The movie received Academic Awards and three Saturn Awards.

Geena received popularity among the spectators after the release of the comedy Earth Girls Are Easy in which Davis and Goldblum again appeared together in the roles of the leading characters.

The actress received the greatest popularity due to her role in the melodrama The Accidental Tourist directed by Lawrence Kasdan. The movie received four Academic Awards, two Golden Globes and the prize of BAFTA Awards. To the surprise of the movie critics, Geena Davis received one of the desired Oscar statuettes for Best Supporting Actress.

In 1991 there was held the premiere of the adventure road movie Thelma & Louise directed by Ridley Scott. In this movie, the leading characters were performed by Geena Davis and Susan Sarandon. And again the actress had a triumph. She received the David di Donatello National Film Awards in Italy and The National Board of Review of Motion Pictures of the USA. She won the nominations for Academic Awards, BAFTA and Golden Globe Awards.

After the huge success, the actress had a recession in her career. Her roles in the pictures Hero and Angie haven't brought her popularity, and the part in the fighter Cutthroat Island could cost her career. The movie "became famous" only by its sad leadership in the list of the worst movies according to the box office: with the investments of $90 million, the film grossed just $10 million. The fighter even was included with the anti-record into the Guinness Book of Records.

The role in the fighter The Long Kiss Goodnight directed by Renny Harlin allowed Geena Davis to rehabilitate herself. The movie was premiered in 1996 and brought the nomination for Saturn Awards to the actress.

In 2000-s the fans of Geena Davis cheered up again: their favorite actress brilliantly acted in the leading role in the series Commander in Chief for which she got Golden Globe Awards and the nomination for Emmy Awards. But in general, the spectators met the project with restraint: the series was closed after the first season.

In 2014 there came out the series Grey’s Anatomy in which Geena Davis and Samuel L. Jackson performed the roles of the leading characters. The script of the picture was written by the highest paid for a movie by the highest paid Hollywood scriptwriter Shane Black, and the perfect acting returned Davis her former popularity.

The actress had managed to prove her status of the star when she performed the bright supporting role in the medical series Grey's Anatomy. Geena Davis's admirers learn the news about her creative career on the star's page on Instagram.

Geena Davis has had four marriages in her life which resulted in the divorces.

In spring of 1982, the celebrity married to the restaurant manager Richard Emmolo with whom they have lived less than a year.

For the second time, the actress got married in 1987, and they celebrated the wedding with her colleague Jeff Goldblum. They have lived together for three years and broke up in 1990.

Three years later after that, the movie star began to have a love affair with the director Renny Harlin who was the director of the failure movie under the title Cutthroat Island in which the actress performed. Together they have lived for five years, but their passion came to an end, and they separated.

In September of 2001, the 45-year-old Geena Davis got married again. For the fourth time, the Hollywood actress chose herself a husband from the sphere far from the movie industry. Reza Jarrahy is a plastic surgeon.

In April of 2002, Davis became the mother for the first time: she gave birth to their daughter Alizeh Keshvar. Two years later Geena gave birth to two boys at the same time – to the twins Kian William and Kaiis Stephen.

In May of 2017, the actress took part in the second season of the American horror series The Exorcist in which she appeared as the character of Angela Rance. The movie was broadcast on Fox TV channel. In the spring of 2018, the project was closed.

In spring of the same year Geena’s family "project" also came to an end: her husband filed for the divorce after seventeen years of marriage. He told that "irreconcilable disagreements" became the reason for their parting. In Hollywood, it is said that Reza, who is fifteen years younger than his wife, betrayed her.

Jarrahy not only refused to pay the alimony to his ex-spouse but also, began to petition for the joint custody of their three children and demands the alimony. 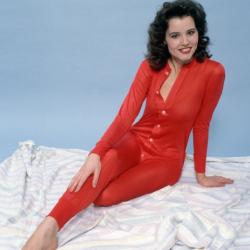