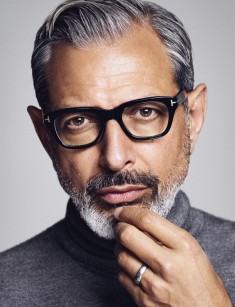 The filmography of the American actor, Jeff Goldblum, has over a hundred films. The Oscar and Emmy Awards Nominee and the Saturn Award Winner for his role in the horror film The Fly has become a Hollywood star. He is known for the outstanding works in the famous projects Independence Day, Jurassic Park, The Big Chill, and Spinning Boris.

The Hollywood star celebrated his 65th anniversary in October 2017. Nowadays he pleases fans with roles in the cult projects. In the summer of 2018, Goldblum starred in the fifth film of the fantasy Jurassic Park series.

The future Hollywood actor was born in the state of Pennsylvania. Jeffrey Lynn spent his childhood and adolescence in Pittsburgh. Goldblum was brought up in a family of Orthodox Jews, he received a religious education, attended synagogue with his parents. At the age of 13, he had a bar mitzvah because he came of age according to the Jewish law.

Goldblum's mother, Shirley Temeles, was born in the USA. In her youth, she worked as a radio broadcaster, then started up her own business, kitchen equipment, and appliances sales firm. The actor’s father, Harold Goldblum, was a therapist.

Jeff Goldblum grew up in a friendly and noisy family. He had also sister Pamela and brothers Lee and Rick. Parents were interested in theater and cinema, promoting a love of creativity for Jeffrey. From childhood, the boy dreamed of becoming an actor, acted like the stars of show business, learned to play the piano, and in the fifth grade, he began to participate in school theater plays.

At the age of 15, Jeff Goldblum went to Carnegie Mellon University and enrolled in drama courses. When he was 17 years old, Jeff moved to New York City where he had better opportunities to pursue an acting career.

Jeff improved his acting skills at the Neighborhood Playhouse under the guidance of Lee Strasberg’s famous student, Sanford Meisner.

The novice actor joined the troupe of the Public Theater, and in the early 1970s made his debut in a musical Two Gentlemen of Verona based on the Shakespearean play. Goldblum was also a talented jazz pianist. Later, the actor admitted that if it were not for success in acting, he would have become a musician.

Jeff started his acting career in the middle of the 1970s. Like many colleagues, he began with bit parts. Goldblum made his debut as Freak #1 in the detective film Death Wish. Then he starred in the comedy California Split and the musical Nashville, where director Robert Altman invited him.

He met Chris Sarandon and Ava Gardner on the set of the horror film The Sentinel. In 1977, he also played a bit part in Woody Allen's romantic comedy Annie Hall, where Allen and an Oscar Winner, Diane Keaton, played the leading roles.

In the 1980s directors began to offer Jeff Goldblum significant roles. He played a prominent part of Michael Gold in Lawrence Kasdan's drama The Big Chill, which received an Oscar nomination. Jeff worked with such Hollywood stars as Tom Berenger and Glenn Close.

In the middle of the 1980s, Kasdan invited Goldblum again to play in his western film Silverado with Kevin Costner and Rosanna Arquette. The movie received two Oscar nominations and entered the top 100 best westerns on IMDb.

The actor felt the taste of fame in 1986, when the sci-fi horror film The Fly directed by the independent movie star, David Cronenberg, was released. The director offered the 34-year-old actor the leading role of scientist Seth Brundle. He won the Saturn Award for this role.

Two years later, the star got a title role in the sparkling musical comedy Earth Girls Are Easy. Goldblum worked again with Geena Davis, his colleague in The Fly.

In the early 1990s, Jeff Goldblum played the significant roles in the thriller film Mister Frost and the crime-thriller movie Deep Cover. But the actor had the enormous success after the release of the projects Jurassic Park by brilliant Steven Spielberg and Independence Day.

In the first film, viewers saw the actor as mathematician Ian Malcolm. The movie was showered with prestigious awards, including three Oscars. In 1997, Spielberg filmed a continuation of the story about the park with cloned dinosaurs and invited Jeff again.

For his work in the disaster film Independence Day, Goldblum and Will Smith received the Saturn Award nominations. In the early 2000s, fans saw the Hollywood star in Dick Wolf’s police procedural drama series Law & Order: Criminal Intent, the comedy Spinning Boris and the sitcom Friends.

In 2006, Barry Levinson’s comedy Man of the Year, starring Robin Williams and Christopher Walken, premiered. Jeff portrayed Stewart. In 2010, Goldblum appeared in the sparkling comedy The Switch with Jennifer Aniston.

In 2014, the actor pleased fans with a prominent role in the comedy-drama The Grand Budapest Hotel. The film premiered in February at the Berlin International Film Festival and caused a surge of positive reviews. The press included it in the ten best films list for 2014. Jeff Goldblum was perfect for a role of Deputy Kovacs.

In 2016, fans saw the continuation of the film Independence Day, directed by Roland Emmerich.

The Hollywood actor has been married three times. He lived with his colleague Patricia Gaul for six years, but the marriage broke up because he fell in love with Geena Davis. Jeff met the beautiful lady on the set of The Fly.

Geena and Jeffrey had a torrid love affair, but after a three-year marriage, the couple divorced in 1990. Goldblum and Davis have remained friends.

In the winter of 2014, the actor married Emilie Livingston. Emilie is not connected with the cinema, because she is a gymnast. They had dated for three years before getting married. On their wedding day, Emilie pleased Jeff with the news about her pregnancy. In the summer of next year, a son, Charlie Ocean, was born and 63-year-old Goldblum became a father.

Two years later, in April, the wife made Jeff happy again. She gave birth to the second child. The boy was named River Joe. Emilie shared the good news with subscribers on Instagram.

Jeff Goldblum told reporters that he had warm feelings for Russia, his ancestors’ homeland, and he wished to play in a Russian film project.

In 2017, the famous actor pleased his fans with a role in the continuation of the fantasy adventure film Guardians of the Galaxy Vol. 2, where he played Grandmaster (a cameo role), and in the superhero movie Thor: Ragnarok. In the latest project, Goldblum appeared as Grandmaster, the character of the Marvel Comics, again.

In the summer of 2018, the fantasy action movie Jurassic World: Fallen Kingdom is scheduled to premiere. It is the fifth film of the series, where Goldblum got the role of Dr. Malcolm again.

The star with an impressive height (1,94 m) will also appear in one more project of the year. It is the thriller Hotel Artemis by the British director, Drew Pearce. He shared this news with a half-million Instagram subscribers. 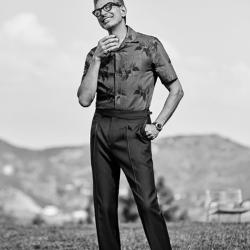