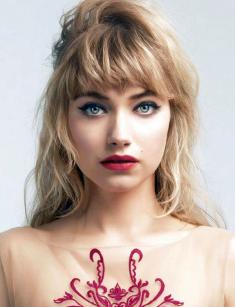 Imogen Poots is an English actress who earned her fame for the role in 28 Weeks Later. Besides, the audience remembers her for Fright Night, The Look of Love, and That Awkward Moment.

Imogen was born in Hammersmith, London, and spent her childhood there. The girl’s father, Trevor Poots, worked as a TV producer, and the mother, Fiona Goodall, was a journalist and volunteer. Imogen has an elder brother, Alex, who is a professional photo model.

Imogen wanted to be a veterinary for a long time and even had an internship at the city pet clinic. One day, she watched the surgery and passed out; thus, this job was not a suitable option.

At that period, Imogen used to attend Saturday classes at the Young Blood Theatre Company. The young talent decided to focus on acting and entered the prestigious Courtauld Institute of Art. However, the studies had to be postponed for two years: Poots started receiving invitations to movies and worked part-time as a model at Select Model Management where her elder brother successfully developed his career.

Imogen Poots debuted when she was a school student. Her early projects included the screen adaptation of the comics V for Vendetta and the fantastic thriller 28 Weeks Later. The latter movie brought the nomination for British Independent Film Award – Most Promising Newcomer.

In 2008, the actress personified the main characters in the historical melodrama Miss Austen Regrets and Me and Orson Welles with Zac Efron. The next year was marked with four new offers including the dramas Waking Madison and Cracks starring Eva Green.

At the same period, Poots participated in the Hollywood comedy Solitary Man and had the opportunity to collaborate with the world-class celebrities: Michael Douglas and Danny DeVito. The next year, the woman appeared in the historical thriller Centurion about the Spanish legionaries.

In 2011, Imogen received her first large parts. She personified the friend of the businessman Paul Raymond (Steve Coogan) in the tragicomedy The Look of Love and Blanche Ingram in Jane Eyre; she collaborated with Mia Wasikowska, Michael Fassbender, Jamie Bell, Judi Dench, and others. Besides, Poots worked on the comedy horror Fright Night (2011) and the crime action movie Need for Speed (2014). The duet with André Benjamin in the biopic Jimi: All Is by My Side was memorable; the actress played the legendary musician’s lover, Linda Keith.

The melodrama That Awkward Moment, the comedy She's Funny That Way, the thriller Green Room, and the music series Roadies are among the artist’s recent works.

Imogen Poots does not like to talk about her personal life. Her official Instagram page contains only portrait pictures of the woman: she appears in various dresses, and her hairstyle changes.

Sometimes, the media give information related to the actress’s romances.

Poots used to date Anton Yelchin, the American actor of the Russian origin. The young people met in 2011 at the movie set of the horror Fright Night; they started dating later. Various sources provide different information: some claim that Imogen and Anton split up quickly because of long distances; others insist the celebrities were seeing each other until the actor’s tragic death on June 19, 2016, when his own car crushed him near the garage.

In a while, the media spread rumors about Imogen’s new boyfriend, Zac Efron; the artists made no comments.

At the end of 2017, the British actor James Norton (Andrei Bolkonsky in War & Peace, 2016) became the woman’s boyfriend. They met at the theater: Imogen and James collaborated in Belleville. Today, the couple often go to public places together and behave like a sweet, happy couple in a puppy-love phase.

Imogen Poots continues to master her acting skills; career is the priority for the woman. In 2017, she participated in five projects including the thriller Sweet Virginia, the drama Mobile Homes, and Who's Afraid of Virginia Woolf?

The drama I Kill Giants starring the actress was presented at the Toronto International Film Festival. It is the story about a teenage girl, Barbara (Madison Wolfe), who is at war with giants; other people cannot see them. Together with her friend, Sophia, she has to understand whether her visions are real.

In 2019, the actress’s fans had the chance to enjoy her acting in the dark comedy The Art of Self-Defense; she played Anna.