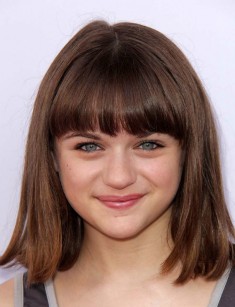 Joey King is the youngest of the three sisters, who have chosen an acting career, but she has the most extensive filmography. By the age of 19, she appeared in 44 films and serials, and in more than one hundred commercials.

The family adventure comedy movie Ramona and Beezus brought the Hollywood starlet world fame. 11-year-old Joey played the role of Ramona, the younger sister of Beezus (Selena Gomez), in the film of 2010. The girls have become friends, and since then the young actress calls her a sister. Critics say that Joey and her friend will be Hollywood stars of a new level of stardom.

The future movie star was born in 1999 in a Jewish family in Los Angeles. Joey celebrates her birthday on July 30. Hunter and Kelli King’s sister was named after her grandfather, Joseph. Sisters’ mother Jamie is a housewife. Father Terry King is an athlete who was engaged in arm wrestling. He worked as a sports consultant of actor Sylvester Stallone for some time.

The parents supported their daughter's interest in acting. From a young age, not only Kelli and Hunter were an example for Joey, but also her grandmother who had previously been a theatre actress.

At the age of 4, the girl debuted in front of the camera. Joey starred in an ad of morning breakfast for children and adults. At 6, the young actress got a role in the short-length film Grace.

On the first day of the shooting, the girl had to play as if her heroine were sinking in the icy water of the ocean. King admitted later that this episode impressed her so much that Joey decided to dedicate her life to the cinema.

Since that time, despite her young age, Joey has always had a job at the cinema. Within a year after the release of Grace, King played bit parts in seven TV series and television films. There are roles in TV series Entourage, The Suite Life of Zack & Cody, Jericho.

The starlet also acquired a voicing experience. In 2008, the actress worked at the animated film Horton Hears a Who! about a kind elephant who protects a fairy folk. King’s heroine, Katie, would have been an insignificant character, but not the throw line:

"In my world, everyone's a pony, and they all eat rainbows and poop butterflies!"

Joey King pronounced the phrase that immediately became an Internet meme. The actress also voiced the beaver girl in Ice Age: Dawn of the Dinosaurs and Jessie from the cartoon The Boxcar Children.

Since 2010, Joey has had more and more prominent roles. The beginning of the new level in King’s career was the movie with Selena Gomez Ramona and Beezus. The same year, the girl appeared in the famous fantasy series Ghost Whisperer. She played a heroine, Cassidy, in two episodes of the series.

King’s filmography has the box office successes. The first film is the comedy Crazy, Stupid, Love, where Joey played Cal’s (Steve Carrell) daughter. Later, there was the successful casting in the role of Young Talia al Ghul in Christopher Nolan's blockbuster The Dark Knight Rises and the shooting in the film Oz the Great and Powerful.

During the last project, Joey met Zach Braff, who got the role of Oz’s circus assistant. She found out about his upcoming project - the movie Wish I Was Here. Later, the actress admitted in the interview that the script about the history of the Jewish family cut her to the heart, and some parts made her cry.

Joey played the protagonist’s daughter who was devoted to religion. The movie premiered at the Sundance Film Festival in 2014. After the screening, the audience rose in applause for several minutes. Later, King starred in another Braff’s movie, the comedy Going in Style about retired people who decided to stick up the bank. Martin Freeman and Michael Caine played the leading roles.

The same year, Joey found the second "father in films." The young star got the role of Greta, daughter of officer Grimly, in the first season of Fargo. King’s partner on the set was Colin Hanks. During the same period, the actress starred in action films Independence Day: Resurgence and White House Down. She appeared in the horror movie The Conjuring, where another rising Hollywood star, Mackenzie Foy, also played.

King played with James Franco in the film Zeroville. At the end of 2017, there was another horror film with the actress. Joey performed the leading role in the movie Wish Upon, which tells about a mysterious box. However, most reviews of professional critics and spectators were negative, and the film did not bring King a significant breakthrough in her career.

The young actress does not hide the fact that she has a boyfriend. Joey has a romantic relationship with a novice Australian actor Jacob Elordi.

The filmography of the young man includes two short-length films and several bit parts. However, there is also the role in the blockbuster Pirates of the Caribbean: Dead Men Tell No Tales. Jacob's first serious work is the leading role in the youth melodrama The Kissing Booth. After playing in it, he started a love affair with his partner on the set, Joey King.

In an interview with Rogue magazine, the actress said that during the filming she became good friends with Jacob and Joel Courtney, who played the main hero’s brother and opponent. "But yes, Jacob is such a special person and being the Elle to his Noah was unforgettable," King said. Earlier, the actress dated Dylan Sprayberry, star of the series Teen Wolf.

Joey King is a fan of the comic books about Spider-Man. She saw all films about this hero. The actress also likes Batman. She has confessed to the press that she is a fan of the series Sherlock and dreams to work with Benedict Cumberbatch, as well as with Leonardo DiCaprio.

According to IMDb.com, Joey King’s height is 1,63 m, and her weight is 51 kg. King is left-handed. She adores Earl Gray tea and tea with honey and apple. Joey King has accounts on Instagram and Twitter, posts photos and tweets from the set, as well as pictures with friends.

Despite the young age, the actress does not neglect charitable activities. Joey also supports Meal on Wheel service. Together with her grandmother, the girl delivers food to individuals at home who are unable to purchase or prepare their own meals.

In 2016, the actress announced on Instagram that she would join the cast of the series the Flash in the third season. She was assumed to play a negative character, Magenta. The show with Joey's participation was scheduled to premiere in 2017, but for unknown reasons, this did not happen.

In 2018, a new film with the participation of the young star was released. She played the leading role in the melodrama The Kissing Booth. The camera crew from the United States and Britain shot the film, based on the novel by Beth Reekles. The history is open-ended, which gives the creators the opportunity to film the sequel. Joey King said about it in an interview with Seventeen.com.

Due to the busy shooting schedule, Joey does not see Selena Gomez so often as it was before, but if they manage to meet, the friends spend time together. King says that Gomez is an example of kindness and a positive attitude toward people. 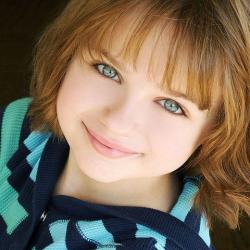