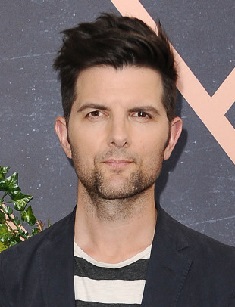 Adam Scott is an American actor, not quite widely-known, but certainly seen often in any Hollywood movie. Being the credited go-to guy, Scott starred alongside many celebrities; however, he gained recognition for his roles in TV shows such as Parks and Recreations and Party Five.

Adam Scott was born on the 3rd of April, 1973, in sunny Santa Cruz, California. His parents, Anne and Dougald Scott, were occupied as teachers but retired at the moment of his birth. Adam’s mother, née born Quartararo, was half Sicilian and had some Irish roots. She worked at a public school as a special educator. Moreover, his father is of Scottish ancestry, so Adam’s surname is entirely truthful. Dougald Scott was a biology professor.

Scott has two siblings, Shannon and David, who are older than him. Moreover, he is related to an abundance of step-brothers and step-sisters, since his parents filed a divorce and both of them remarried soon.

The boy was raised in California and went to Harbor High School. Adam lived mostly with his mother, who once presented him a small black-and-white television, that kept the future actor up during some nights. Thanks to such a technology Scott got acquainted with David Letterman and his late-night show.

He rapidly became his fan and dreamt of taking the NBC tour of 30 Rockefeller Plaza, which eventually came to life. After graduation, he enrolled at the American Academy of Dramatic Arts and moved to Los Angeles, the most suitable city for any actor. The Academy is the oldest school in the U.S. and has two locations, in LA and NYC. Its notable alumni include, for instance, Adrien Brody and Paul Rudd (the last one became friends with Scott).

Adam Scott had a chance of beginning his professional career right after graduation in 1993. In 1994 he made guest appearances on both TV and the big screen. He was cast as Joe in Cityscrapes: Los Angeles and took part in a pilot episode of the MTV series Dead at 21.

The following year Scott got his first recurring role in the ABC sitcom Boy Meets World. He portrayed Griffin Hawkins, a charming bully, in the show produced by Michael Jackson.

In 1996 Adam appeared in strange roles such as a guy hit by a car in ER and a guy with his guts out in Hellraiser: Bloodline. Besides he had a chance of participating in such famous franchise as Star Trek, playing Defiant Conn Officer

The next few years he continued being cast as minor characters, such a fan in a bar or the coffee boy. According to the interview, Scott started as a coffee shop worker too. It is evident that small parts couldn’t earn him enough money, but he kept trying, and his list of movies and TV shows widened.

Finally, Scott was granted and landed a significant role in a family drama Party of Five (1998). He played a college friend of one of the main characters. The same year Adam got a recurring role in another show, Wasteland, the one-season ABC drama.

Scott’s success on the big screen came much later, in the 2000s. He landed an abundance of supporting roles, such as the assistant of Howard Hughes (DiCaprio) in The Aviator (2004), the gay best friend of a wife-to-be (Lopez) in Monster-In-Law (2005), and the nurse of Katherine Heigl in Knocked Up (2007). Moreover, Scott portrayed Tom Sterling’s brother, with whom they created an Internet startup company in the movie August (2008). It told the story of two stars, who had to face real problems due to the collapse of the stock market right before the 9/11 attacks.

Getting back to his TV work, Scott made a small recurring appearance in Six Feet Under (2002), portraying the love interest of the leading character, David.

In 2007 the actor was cast as Sonya Walger’s partner in Tell Me You Love Me, but the first main role he got was thanks to his friend Paul Rudd. Rudd with a group of producers created a comedy series Party Down (2009), that told a story of six aspiring actors, who worked for a catering company in between auditions. The role of Henry Pollard won Scott the nomination for Entertainment Weekly Ewwy.

Adam Scott became really recognisable after his appearance in Parks and Recreations (2009-2015). Initially, he was cast only for two episodes, but then the love interest of Amy Poehler’s character turned out to be popular and demanded, so Scott was signed for a couple of seasons more. Overall, he appeared in 97 episodes of the total 125 ones. Scott’s character in the NBC series, Ben Wyatt, was a state auditor, who had a relationship with Leslie Knope and later married her. He became so popular due to his unique charisma and the interpretation of Wyatt.

After the Parks and Recs, Scott had a recurring role in The Good Place (2016), and currently, he can be seen in Big Little Lies (2017) as Ed Mackenzie.

He also produced the Fox supernatural sitcom Ghosted (2017) and starred in it.

Unfortunately, there is no information about whether Scott is going to appear in his own new show or not.

Adam Scott met the love of his life in the face of Naomi Sablan. She is a prominent producer, well-known for her work with Jimmy Kimmel Live!, the ABC show. They dated for some time, and Adam’s girlfriend eventually changed her surname to Scott in 2005.

Adam tends to appear with his wife in public a lot, and they are usually together on all photos taken by the paparazzi.

Scott is a massive fan of music, and his most favorite bands are R.E.M. and U2. With his friend Scott Aukerman, another famous comedian, they created a podcast, that was produced by the podcast network Earwolf. The podcast was called U Talkin' U2 To Me?, but featured no only the news of U2. Such a prominent actor as Scott needed a place for the improvisations and various discussions, so he developed and hosted it with a little help. In February 2018 the next podcast was released R U Talkin' R.E.M. Re: Me?, where more band-related topics were mentioned. It is interesting that Scott defends the last albums on R.E.M. and believes that they aren’t worse than the previous ones.

Besides music, like any other boy in the 1980s, Adam Scott was fond of Star Wars. Once he told the story of how he attempted to invite Mark Hamill to his birthday party during the episode of Jimmy Kimmel Live! he guest-starred. The actor was shocked when Luke Skywalker himself came in the studio with a lightsaber! The moment is recorded so that one can watch it on the Internet.

Scott has an estimated net worth of $8 million.

Once the actor was mistaken with a golfer Adam Scott, so he was congratulated instead of the winner. The Australian golfer, famous for the remarkable golf swings and recent Uniqlo ads, took the third place at the 2018 PGA Championship and gained recognition from the golf lovers. However, they addressed their words of praise to the wrong person on Twitter. It is essential not to confuse Adam Scott with Adam Scott Miller, a young artist. There is also a blogger, Scott Adams, famous for his Periscope videos and his sayings involving President Trump and affirmations.

Although Adam Scott has been nominated several times, he has never become an award-holder. For the first time, he was recognized for a role in the Starz show Party Down with the Emmy for the Best Actor in a Comedy Series.

In 2010 he was chosen as the Best Male Lead for an Independent Spirit Award for his part in The Vicious Kind. Later in 2017, he was also a nominee for this award, but in a different category, as Best First Feature.

Moreover, Scott was appraised for the role of Ben Wyatt, that made him even more popular. He was a nominee for a Critics’ Choice Television Award for Best Actor in a Comedy Series.