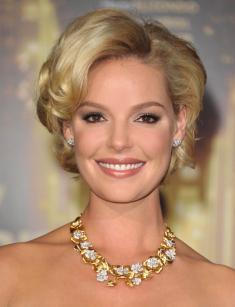 Katherine Marie Heigl is an American actress and producer, who won the recognition of the audience due to the role of Izzy Stevens in the television series Grey's Anatomy. And the films that brought fame to the artist Knocked Up, Life as We Know It, The Ugly Truth and others.

Katherine was born in the US capital, Washington. Her father, Paul Heigl, ran a financial enterprise and Nancy Heigl, her mother, worked as an HR manager. The girl became the fourth child in the family: the actress had two brothers Holt and Jason and the sister Meg, whose parents adopted.

Jason was killed in a car accident in 1986. This tragedy affected her family greatly: the father and mother became religious and became activists of The Church of Jesus Christ of Latter-day Saints. Katherine was educated in a strict Christian school.

Childhood of Heigl took place far outside of Washington. First, she lived in Virginia, then in Denver and her family settled in the city of New Canaan, in a large house built in the Victorian style.

Katherine Heigl started to pose for the cameras at the age of 9. She tried herself as a model in advertising hair care products for the first time, which produced a native aunt of the girl. And then her parents began to send pictures of their daughter to the agencies and the little girl was called to advertise Cheerios cereal in the end.

In addition to regular schools, Heigl went to a music studio, where she learned to play the cello. But the girl studied at high school, so to speak, "over time" and eventually left New Canaan High School to focus on the cinema.

Katherine Heigl started her career as an actress when she was a teenager. Interestingly, the first romance of the artist was That Night. This movie was a debut for another star - Eliza Dushku, who became famous thanks to the fantasy Buffy the Vampire Slayer. Katherine appeared with Gérard Depardieu in the comedy My Father, The Hero after a series of small roles two years later and was nominated for the film award as the best young actress.

Later, she starred in the comedy thriller Bride of Chucky, the adventure action Prince Valiant, the youth comedy 100 Girls.

A real breakthrough expected Heigl in 2005, when the screens began to broadcast the medical drama series Grey's Anatomy. Katherine played the role of a young doctor, Izzy Stevens, there and received a prestigious Emmy Award for this work.

Another round of popularity gave incendiary comedy Knocked Up with Seth Rogen, 27 dresses with James Marsden and The Ugly Truth with Gerard Butler. Producers and directors carried Heigl to the category of comedy actresses for a long time.

Then Katherine appeared in the comedy with elements of action movie Killers, where the girl's love became Ashton Kutcher. Then came the movie Life as We Know It, in which Heigl starred in the main role and produced.

At the end of 2011, the audience saw Katherine Heigl in the romantic new year's comedy New Year's Eve. The director Garry Marshall assembled a stellar cast in the movie. Colleagues of Katherine were Michelle Pfeiffer, Robert De Niro, Zac Efron, Jessica Biel, Til Schweiger and others. The legendary artist Jon Bon Jovi plays her beloved in the movie.

Katherine again played the role of a main female character in the next comedy with elements of crime One for the Money. She also produced a movie.

Another star cast picked up in the comedy melodrama The Big Wedding. But Katherine was nominated for the Golden Raspberry as the worst supporting actress this time.

Then the star was not satisfied that she plays only in a comedy. Katherine was able to return to the dramatic role in 2014 thanks to the political television series State of Affairs. However, the project was closed after the first season because of negative reviews from critics.

After that, Katherine "rehabilitated," appearing in the melodrama Jackie & Ryan, which premiered at the Venice Film Festival. Heigl and the partner of the girl Ben Barnes performed the music on the site, sounding in the film. They also participated in the creation of soundtracks.

Katherine Heigl tried her hand at voice acting. The actress voiced the squirrel Andie in the cartoon The Nut Job and The Nut Job 2: Nutty by Nature.

A special place in the chosen filmography of the actress is the film Jenny's Wedding. Katherine tried on the role of a girl with non-traditional sexual orientation. The release of the movie was timed to the legalization of marriage equality in the United States and funds for the creation of the film were collected with the help of crowdfunding. The actress Alexis Bledel played beloved of Heigl.

In the 90s, Katherine Heigl met with the American actor Joey Lawrence and was in a romantic relationship with the star of the youth series Roswell, Jason Behr. In 2001, they even announced their engagement and broke off the affair a year later.

In 2005, Katherine met the singer Josh Kelly. They met at the presentation of the musician's video for the song "Only You" and began dating. The engagement was announced the following summer and Heigl acted extremely out of date: the couple did not live together before the wedding. As the actress said, she wanted life after marriage to be psychologically different from dating or cohabitation.

The wedding ceremony took place on December 23, 2007, in Park City. The couple adopted a South Korean girl two years later, who was named after her grandmother Nancy Leigh and the family had a second adopted daughter Adalaide Marie Hope three years later. In the summer of 2016, the audience found out that Katherine had under the heart of the child the first time. As the actress said, she and her husband expected a boy.

In December of the same year, the son of Katherine, Joshua was born, who was named Joshua Bishop.

A close friend of the Hollywood star is the actor, T.R. Knight. He became the godfather of her children.

Many people are afraid of something in life. Sometimes their fears turn into phobias. And Katherine Heigl is afraid of slugs to unconsciousness.

The artist leads her microblog on "Instagram" like most Hollywood stars, which is watched by millions of fans. Katherine shares personal photos with her subscribers, voice-over, photos and sometimes video.

She is an active user of Twitter, where the records of the actress appear.

Katherine's fans know about the star's love for charity. She supports Donate Life America. She has chosen this project for a reason: when the artist's brother died, the girl's parents donated Jason's organs for donation.

The career biography of the artist continues to develop. Katherine was able to escape from the range of comedy roles.

In 2017, the actress played the main role in the thriller Unforgettable. She turned into a woman, seeking to destroy the relationship of her ex-husband with a new lover. Katherine Heigl has a net worth of $30 million.

She appeared in the legal series Doubt in the role of a lawyer Sadie Ellis the same year. However, the project was removed from the show because of low ratings.

In 2018, it was known that Katherine was approved for one of the main roles of the eighth season of the popular series Suits.