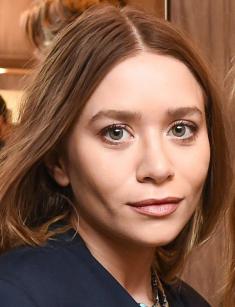 Ashley Olsen is an American actress, producer, entrepreneur and designer. Her rise to fame began in 1987 with participation in the series Full House. The eminent actress has created her own perfume, developed and released a line of clothing and accessories based on her sketches. She is actively involved in charity work and is not going to stop there.

Ashley was born two minutes before her twin sister, Mary-Kate Olsen on June 13, 1986, in Sherman Oaks, Los Angeles, California. Besides Mary-Kate, she has an elder brother, Trent, and a younger sister, Elizabeth, the star of the movies Captain America: The Winter Soldier, Avengers: Age of Ultron, Captain America: Civil War, Avengers: Infinity War, and Avengers: Endgame.

Her father, David "Dave" Olsen, is a real estate developer and mortgage banker, and her mother, Jarnette "Jarnie", is a personal manager. Her parents filed for divorce in 1995. Since then, the upbringing of the children became the responsibility of her father's second wife, who gave birth to Ashley's half-brother, Jake, in 1996, and in 1997 - to her half-sister, Courtney Taylor.

Ashley's mother was able to sign her daughters up for the acting career in Hollywood when they were nine months old. Thanks to their quiet nature, the twins joined the cast of the television series, broadcast from 1987 to 1995, called Full House.

After the shooting officially ended, Ashley, who had grown a little and became stronger, moved from a regular school to a prestigious educational institution, Campbell Hall Episcopal Day School. In 2004, Olsen joined the ranks of students at New York University. And, although her sister gave it up after the first year, Ashley, deciding to focus solely on the acting career, left it only in 2007.

Ashley became famous thanks to her participation in a cult TV series Full House, which was broadcast for eight seasons straight. Few people know, but in the television series, which aired in Primetime on the ABC channel in the period from 1987 to 1995, alternately starred both twin sisters.

Ashley and Mary-Kate, who played the part of Michelle Tanner, during the first season were listed as Mary-Kate Ashley Olsen in the credits. The audience thought that one actress was playing this role. However, in subsequent seasons, this error was corrected.

In 1995, Ashley together with Mary-Kate starred in the movie It Takes Two. On this film, directed by Andy Tennant, besides her sister, the actress worked together with such well-known actors as Steve Guttenberg and Kirstie Alley. For a hundred minutes, the viewer watched the adventures of charming girls who were as like as two peas, doing everything possible to overcome difficulties and find happiness.

In 1998, the comedy movie Billboard Dad was released on the big screen. The plot of the film is based on the life story of twin sisters who are trying to find their lonely father a life partner. The following year, Ashley and Mary-Kate starred in the feature film Passport to Paris. Two sisters-explorers, who this time in search of adventure run away to Paris once again became the center of the viewers' attention.

In 2001, the Olsen sisters appeared in two new long-running television projects, the comedy show So Little Time and the animated television series Mary-Kate and Ashley in Action! In 2003, the small stars appeared in the popular film Charlie's Angels: Full Throttle. The film directed by McG, besides Mary-Kate and Ashley, starred Cameron Diaz, Drew Barrymore, Lucy Liu, and Demi Moore.

In 2004, the actresses got into the characters of the twins Roxanne "Roxy" and Jane Ryan in the movie New York Minute. After the release of the film on the big screen, the Olsens received the mock booby prize The Golden Raspberry Award. In the same year, Ashley and Mary-Kate Olsen were honored with a personalized star on the Hollywood Walk of Fame.

In 2009, the motion picture The Jerk Theory was added to Ashley's filmography, as well as the documentary film Scatter My Ashes at Bergdorf's.

In 2006, the Olsen sisters collaborated with the New York-based designing duo, Badgley Mishka. The girls participated in a photo shoot, dedicated to the release of their new collection. Then these pictures were published by all leading printed editions of the world. The designers who collaborated with the actresses noted a very rare fashion taste of the sisters, and also emphasized their extraordinary approach to the choice of clothes.

In the same year, Time magazine published an article devoted to the style of twins. Critics believed that it was because of this article that the number of sales increased by 23%. The company Dualstar Entertainment Group, founded by their father, already back then was bringing the girls a stable annual income ($70-100 million). Despite this fact, Ashley and Mary-Kate decided to try themselves in the fashion industry.

In February of 2007, they announced the launch of their fashion line, The Row. In two months, the Hollywood stars once again surprised the public with a statement about the development of their own label, Elizabeth and James. They decided that the clothes of this brand would be less expensive than those of the previous line. At first, the fashion critics doubted the talent of two enthusiastic sisters. However, because of their incredibly hard work and sincere desire to produce quality products, in a couple of months, the doors to the fashion industry opened in front of Ashley and Mary-Kate Olsen.

The actresses presented their collection at the Mercedes Benz Fashion Week in 2010. Having strengthened their position, the sisters dived into the literary world. In 2008, a book called Influence saw the light of day. The publication contained interviews with the most prominent figures in fashion, who made a significant impact on their style (Karl Lagerfeld, Terry Richardson, Diane von Fürstenberg). The girls also revealed a collection of pictures, which before they held in private.

Since 2009, Mary-Kate and Ashley Olsen have been actively involved in a large number of charity projects. Also, this year was special for the girls because of one more fact: the sisters received the ELLE Style Award in the category Style Icons. In 2010, The Row collection was presented on the New York Fashion Week, and it received positive reviews from fashion critics. In July, J. C. Penney and Olsenboye supermarkets started displaying the budget-friendly clothing line for teenagers.

In November of the same year, Olsen sisters announced the launch of a line of accessories by Elizabeth and James brand, called Textile Elizabeth and James. The label started developing frames for sunglasses, producing a jewelry line and creating shoes. In 2011, the twins presented their first cruise collection. Also, as part of the development of The Row, the girls released a limited collection of bags made of ostrich and python leather. Products prices ranged from $2,350 to $39,000.

Another achievement is the cooperation of the most popular middle-priced Shoe brand in Europe, Toms Shoes with The Row brand. As part of the company, the sisters went on a charity mission to Honduras, where they gave shoes to children in need.

Despite the love of fans around the world, Ashley's private life was not as successful as her incredible acting career. The "love-list" of Ashley Olsen includes actor Matt Caplan, the front singer of the band 30 Seconds to Mars Jared Leto, Greg Chait, Justin Bartha, and David Schulte. Ashley dated Matt for three years, from 2001 till 2004, when the two realized that they were not meant to be. With Jared Leto, things started getting complicated within the first year, and the couple decided to give up the problematic relationship.

Ashley and Greg Chait had a lot in common since he is a designer too, but after two years, they announced that they were no longer together. Then there was Justin Bartha, the performer of the leading role in the movie the Hangover, whom she dated for three years.

Even though the celebrities did not talk about the reasons for the break-up, it must have hurt a lot. After it, Ashley did not dive into a new relationship for two years. In 2013, Ashley started dating the CEO and President of Oliver Peoples company, David Schulte. They went out for a year, and then Ashley realized he wasn't the one and ended the affair.

In 2015, the famous actress hit a rough patch and started having health problems. Doctors diagnosed Olsen with Lyme disease (an infectious disease caused by a tick bite). The condition that affects the skin, joints, central nervous and cardiovascular systems was found only at the third (most dangerous) stage. Fortunately, after a couple of months of diligent treatment, Ashley's condition improved.

In 2016, the actress became interested in 58-year-old financier Richard Sachs. Fans thought that Ashley considered marrying the respectable man. In January of 2017, they took a holiday together. The two seemed to be happy and didn't try to hide their feeling from the paparazzi. But in the middle of 2017, the couple decided to break up. A lot of printed editions wrote about the supposed reasons for the break-up.

To this day it remains a mystery when exactly the lovers decided to go their separate ways. The rumor has it that it was Ashley Olsen, who, not being ready for marriage and children, initiated the break-up. The twin sister of the actress, Mary-Kate, is enjoying the perks of family life (the actress is married to Olivier Sarkozy, the brother of the ex-president of France, Nicolas Sarkozy). And Ashley is taking her time in the process of searching for her significant other.

Ashley and Mary-Kate Olsen have a combined net worth of $300 million, being the eleventh-richest women in entertainment. In early August of 2017, Ashley together with her sister, Mary-Kate, presented the perfume Nirvana by Elizabeth and James, created under their supervision.

At the moment, 31-year-old actress, who is 5 feet 15 inches tall and weighs 97 pounds does not work on movie sets and devotes herself to business. The performer of the leading role in the film When in Rome is one of the members of the Board of Directors of Dualstar Entertainment Group company, created by her father after the success of his beloved daughters in the TV series Full House. The film is promoting fashion products of Olsen sisters (clothes, perfume, cosmetics, accessories). Currently, their brand is sold both in the United States and abroad.

Even though Ashley is not on Facebook, Twitter or Instagram, fans of her work have created a community in social media where her admirers publish photos, interviews, and news related to the creative biography of the Hollywood movie star.