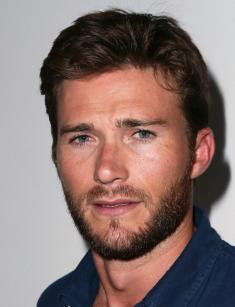 Scott Eastwood is a young American actor and model who earned his fame for the fantasy thriller Enter Nowhere and consolidated the success thanks to the horror Texas Chainsaw 3D, the drama The Longest Ride, the superhero blockbuster Suicide Squad, the action movie The Fate of the Furious, and other projects.

Until 2002, Scott Eastwood’s name was Scott Clinton Reeves: it his mother’s second name. The stewardess Jacelyn Reeves had an affair with famous Clint Eastwood and gave birth to two children: the son Scott and the daughter Kathryn. However, Clint did not recognize the kids at once: when he had a romance with Jacelyn, he had a common-law partner. For this reason, there was a mark in Scott’s and Kathryn’s birth certificates that the father rejected them.

The future actor was born in California in March 1986 and grew up in Hawaii. Although Clint Eastwood did not acknowledge paternity officially, he communicated with his children and even helped Scott make his first steps in cinematography after graduation from Loyola Marymount University in Los Angeles.

In 2006, the artist debuted in the war drama Flags of Our Fathers directed by his father. Later on, Clint Eastwood gave his son two small roles in Gran Torino and Invictus.

Many critics agree that the young actor emerged from the shadows of his famous father in 2010 when he played the main character in the fantasy thriller Enter Nowhere directed by Jack Heller. The role of the young man lost in a gloomy, mysterious forest proved to be beneficial: Eastwood Jr. showed his talent and individuality.

The next triumph took place three years later: the horror Texas Chainsaw 3D by John Luessenhop brought the young man one of the lead roles. The project grossed $47 million; the budget was $10 million. Right after the release, all actors found themselves famous.

The actor proved to be an independent talent. His modeling appearance contributed to the success; he often received roles in romantic melodramas. The artist looked brilliant in any image, whether it was a surfer in The Perfect Wave or the drama Shelter where Scott personified a mysterious hotel employee.

Since 2010, Scott Eastwood has been engaged in three or four projects annually. In 2015, he worked on four movies; the drama The Longest Ride with Britt Robertson was the most successful one.

In summer 2016, the long-awaited superhero action movie Suicide Squad was released. The story is set in the DC universe and shows many characters of the popular comics, such as the iconic villain Harley Quinn (Margot Robbie) and the main antagonist of Batman Joker (Jared Leto).

The movie is notable for the main characters: none of them is good. The fate of the whole world depends on villains and mercenaries who are gathered together by the government to participate in dangerous missions. However, Scott played a good guy: Lieutenant GQ Edwards.

In 2016, the political thriller Snowden by Oliver Stone came out. The story is based on the life of Edward Snowden, the former CIA agent who provided the media with the secret NSA information. It is a permissive interpretation of the books about this person’s life: The Snowden Files: The Inside Story of the World's Most Wanted Man by Luke Harding and Time of the Octopus: Based on the True Story of Whistleblower Edward Snowden by Anatoly Kucherena. Scott Eastwood personified the NSA agent Trevor James.

In December 2016, the actor had a secondary role in the crime drama Live by Night by Ben Affleck. It was the screen adaptation of Dennis Lehane’s book under the same title that told the story of the famous gangster Joe Coughlin. The movie was released in January 2017.

Many modeling agencies appreciate Scott’s attractive appearance: Eastwood is a popular model. The man collaborated with Hugo Boss and Abercrombie & Fitch and used to be their spokesperson for a while.

As the actor’s career was developing, he was more and more popular among women. The success in modeling also contributed to people’s interest.

The actor is not married; he has had many affairs. In 2014, the man dated the Playboy model Brittany Russo. They visited rodeo shows and Hollywood parties together; at the end of the year, the couple broke up.

In September 2014, the media were discussing the actor’s relationship with Jewel Brangman. However, things turned out to be tragic: the couple had an accident when they rode Jewel’s car. The woman’s safety bag opened because of some car defect, and metal fragments injured her neck; she died of the trauma later. Scott Eastwood had no particular injuries and soon came back to cinematography.

In the middle of 2015, the paparazzi noticed the artist with a new girlfriend, Charlotte McKinney who appeared in the series The Doctors. Thanks to her attractive body, the woman was called “hot” by the media. Charlotte is seven years younger than Scott. The couple was seen together in Malibu.

In 2016, there were new rumors: Scott flirted with Nina Dobrev. The couple was noticed in parties; the actors posted their photos where they were making faces and hugging.

Nowadays, Scott continues to play police officers and military men. Many directors use the actor’s facial features and athletic figure to portray such characters. The actor’s height is 5.91 ft. (180 cm.), and his weight is 182.98 lbs. (83 kg.).

In 2017, Scott played Little Nobody, the partner of Mr. Nobody (Kurt Russel) in the eighth movie of the famous franchise, The Fate of the Furious, that continued the storyline about the racer Dominic Toretto (Vin Diesel).

The French action movie Overdrive was another 2017 project; the actor got the lead role of a hijacker who stood in the powerful mobster’s way.

In 2018, the actor appeared in the sci-fi movie Pacific Rim Uprising.