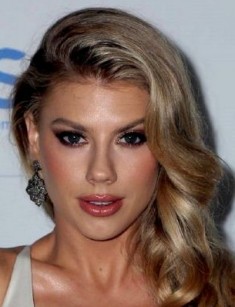 American model and actress Charlotte McKinney has become famous after the appearance in the hamburgers commercial. The smoldering blonde had such a seductive look (the model’s bust measurement is 96 cm) that she was showered with offers to play in films.

Although the young woman plays supporting roles or bit parts, she stubbornly pursues her aim. 2017 was fruitful for McKinney because she appeared in the new film adaptation of Baywatch, films Mad Families, and Flatliners.

Charlotte was born on August 6, 1993, in the American town of Orlando (Florida). She and her elder sister Garland grew up in an ordinary American family. When the actress gives interviews, she does not often recall her childhood and adolescence, as if trying to forget about this period of her biography. Moreover, Charlotte dislikes talking about the school years. The future actress studied at Boone High School. She had dyslexia in the primary classes, could hardly read, and was a mentally disabled student. So, the classmates bullied her and even mocked openly.

However, while Charlotte was growing up and becoming more and more charming, the boys changed their attitude toward the beautiful blond girl. On the contrary, the girls looked at her with ultimate disdain. The star said in an interview with FOX:

“I didn’t have any girlfriends. A lot of my friends were guys, and I was called a slut by a lot of people. I was just growing these large breasts at such a young age, not really knowing what to do with them or how to wear them. It was humiliating. It was even worse at the parties because jealous girls threw beer on my head out of spite. I had to leave school because of the mockery.”

At the age of 17, Charlotte dropped out of high school to pursue a modeling career. The parents, Susan and Terry, supported the daughter.

"Agencies did not sign contracts with me because of the height. 169 cm was not enough for a model. But I was very persistent, "McKinney has recalled.

However, it was almost impossible to succeed in the modeling business without the agency's representation. Charlotte participated in several photo shoots, but she was often in despair. However, social networks helped the girl. The blonde decided to follow in the footsteps of the Instagram stars, Kim Kardashian, Kate Upton, and Nina Agdal, who owed their success to the social media.

The model’s Instagram account has become extremely popular. The beautiful blonde’s sexy and racy photos attracted the attention of thousands of followers, their number increased exponentially and nowadays there are over several million subscribers. McKinney soon received an offer to shoot in the advertising for the fashion brand Guess. Later, the girl managed to sign a contract with Wilhelmina Models.

2015 was a turning point for the beautiful woman. She starred in Carl's Jr.'s Burger commercial. The whole plot of the video centers on the model’s attractive body, and its meaning is:

More than 111 million people watched a 30-second video, shot for $ 4 million. It aired during the most popular in America match, Super Bowl XLIX. The following day Charlotte woke up famous.

The video appeared in the winter. In the summer, GQ magazine named the gorgeous blonde its muse. In the autumn, she entered the top ten of FHM magazine's 100 Sexiest Women In The World, along with such stars as Jessica Alba, Zoe Saldana, Blake Lively, and others.

In 2015 Charlotte was also invited to the TV to participate in the new season of Dancing with the Stars, where celebrities paired with professional dancers compete against the others. McKinney’s partner was a professional dancer, Keoikantse Motsepe. However, Charlotte had problems with dancing, and the pair quickly left the show and did not have enough time to enjoy the viewers’ attention.

Charlotte made her television debut in 2006, appearing in the episode of the series Doctors. However, only after a new wave of success in 2015, the young woman could develop further her acting career. The actress began to cooperate with Adam Sandler's Happy Madison Productions. In 2015 she appeared as Missy in the comedy Joe Dirt 2: Beautiful Loser.

In 2016, the movie The Late Bloomer was released, where McKinney played a bit part. Finally, in 2017, three movies with the participation of the hot blonde were released.

Of course, Charlotte made a big entrance in the movie Flatliners. The woman rides an excellent motorcycle, but the participation can be hardly called a role. In the film Baywatch, the actress also got a small role. She played one of the rescuers, Julia, and appeared in a typical image: a swimsuit, flying hair and the sea as a background.

But in Fred Woolf's film Mad Families, Charlotte already had one of the title characters, Sharni. The partner in the movie was Charlie Sheen.

In 2015, on the wave of success, Charlotte had a love affair with the famous Hollywood lady's man, Scott Eastwood (a son of legendary Clint Eastwood). The couple did not comment on the relationship, but the paparazzi took the pictures of the stars taking a walk on the beach in Malibu.

Charlotte has said that she carefully hides her personal life, so she does not post the photos that reveal her private life on the social network.

By the way, McKinney does not have pictures with American actor Stephen Dorff on Instagram, although according to reliable sources, the actress has romantic relationships with him.

In 2018, the crime drama First We Take Brooklyn was released. It is the latest role in the actress’s filmography.

She also continues her modeling career. In early 2018, the model together with Joe Jonas starred in revealing photo shoot for Guess Underwear campaign. The model and actress is ready to move on and develop her career further.

"I want to be famous like Claudia Schiffer or Brigitte Bardot," she has told reporters.

The woman has also said that she wants to come out of the shadow of the image created in the burgers commercial. 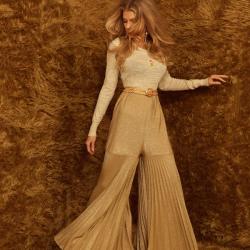