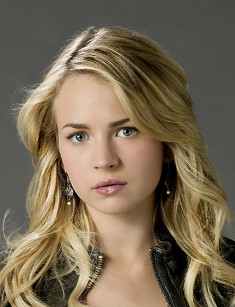 Britt Robertson was born in Charlotte, North Carolina, on April 18, 1990. However, the family soon moved to more southern Greenville. After a while, Brittany's parents separated, but after the divorce, they had a lot of children. Her mother and stepfather had two more daughters and one son, on the contrary, her father with his new wife had two sons and one daughter.

Britt’s father is a restaurant owner, and after the birth of the children, her mother became a housewife. Besides, she disapproved of the current American educational system, and therefore the mother homeschooled all her children.

Her mother enrolled Brittany in a local theater because she feared that the girl would be shy and unable to integrate into society fully. At first, the girl got small child roles in productions, but managers soon noticed her talent and advised the parents to develop the girl’s acting career.

So Britt began to attend numerous auditions mainly for series. She received her first bit part in the little-known TV series Sheena, released in 2000. Brittany got the role of a little daughter of scientists who organized an expedition in the jungle. After her parents’ death, she was taken in by the local tribe.

When she was 12 years old, every week the gifted girl went to auditions in Los Angeles, and it soon became clear that she could not do this anymore. At the age of fourteen, Robertson together with her paternal grandmother moved to Los Angeles to increase her chances to find a good job on television. And the success was not long in coming.

Although Brittany occasionally managed to get small roles in films and series, the first truly significant work was shooting in the movie Dan in Real Life, released in 2007. The famous comedian Steve Carell played the leading role in this film, and Robertson portrayed his daughter.

The gifted girl drew the director’s attention. The young actress’s body measurements also contributed to her success. Robertson's height is 159 cm, and the weight is only about 49 kg. Britt is enchanting wearing jeans with a T-shirt, an evening dress or a swimsuit. It does not matter whether she is with long hair or short hair, with a fringe or without it. So, shortly after filming with Steve Carell, she managed to appear in many TV series CSI: Crime Scene Investigation, Law & Order, Life Unexpected, The Secret Circle.

Robertson’s acting in each of these series got positive reviews from critics, they especially appreciated the young actress’s role in the film Life Unexpected. In general critics praised the series very highly, but, on the contrary, its ratings were low, and the series was closed after two short seasons. Brittany got the title role in The Secret Circle, but this series was soon closed (after the release of the first season).

Although the young actress was not lucky to star in a series that would have world-fame and become cult, the participation in the projects mentioned above made her a media personality. Journalists wanted to find out about the young talented actress’s boyfriend, and the beautiful girl’s Instagram account had more and more subscribers. Directors also paid their attention to Britt.

In 2010, Robertson got a significant role in the Disney television movie Avalon High, where the current events intertwined with the stories of King Arthur’s reign. In 2011, the actress played in the slasher film Scream 4, the sequel to the mediocre, but still popular series of youth horror films.

In 2013, Brittany brilliantly played in the drama film White Rabbit. As a result, she won the Boston Film Festival Award for Best Supporting Actress. The same year, the actress began filming in the series Under the Dome based on the book by Stephen King. The series tells how a small and seemingly unremarkable town is cut off from the rest of the world by a transparent barrier that cannot be destroyed.

Eventually, the series was closed after three seasons. The intrigue, which the creators managed to create in the first episodes, soon came to naught, and by the end of the third season, even the most devoted fans began to hate the series. Nevertheless, it was well promoted not only in the USA but also abroad. So, this project worked for Robertson’s benefit.

The next worthy film, which starred Brittany, was the project Cake with Jennifer Aniston in the title role. The film is somewhat hard to watch but it received positive reviews from critics and, undoubtedly, became a worthy movie in Robertson’s filmography.

However, she finally became the world-famous movie star after the release of the melodrama The Longest Ride, which premiered in the spring of 2015. The actress’s partner on the set was charismatic Scott Eastwood, who played the role of a bull rider, barely making two ends meet on a family ranch. Britt got the role of his lover. The film was based on the book by Nicholas Sparks, which tells about a pure love, which can overcome any obstacles.

The worldwide box office grosses are almost double its budget, although critics were lackadaisical about this light-hearted melodrama. Nevertheless, people liked the film, and Brittany Robertson's photos began to appear more and more in society columns, on the covers of magazines and on the Internet. Journalists and Britt's fans like the fact that the actress looks a little bit like famous Jennifer Lawrence.

The next project of the beautiful young lady was the science-fiction, mystery adventure film Tomorrowland, also released in 2015. In this unusual film, the girl got one of the leading roles, and her partners were Hugh Laurie and George Clooney. Famous Clooney subsequently said that the acting abilities of his young co-star struck him.

Moreover, the following films give the actress an opportunity to work with her older colleagues too. In 2016, Robertson met such masters as Julia Roberts, Kate Hudson, Jason Sudeikis, and could work with Jennifer Aniston again on the set of the film Mother's Day.

In 2017 Netflix will broadcast the series Girlboss, where Robertson plays Sophia Amoruso. Sophia is a real woman who, in her early twenties, could start up her own business and earn millions of dollars almost from scratch.

Since Britt appeared in famous films and serials, the media have not stopped being interested in her boyfriends. The charming actress who practically does not use make-up but always looks great, cannot be alone. When the girl filmed in the series The Secret Circle, where her main partner on the set was Thomas Dekker, the media wrote about their love affair.

However, since 2011 the actress has had a relationship with the star of the films The Maze Runner and the series Teen Wolf, Dylan O'Brien. The actors met on the set of the little-known movie The First Time, where they played a teenage couple in love. The film was not very popular with either viewers or critics, but it became fatal for Britt and Dylan.

Robertson loves animals very much. Britt has adopted two dogs (Clyde and Buddy), and she tries to spend with them a lot of time. Naturally, the girl often communicates with her numerous relatives, especially with her grandmother who supported the actress’s first steps in the cinema. 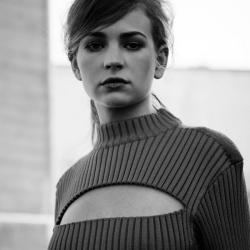