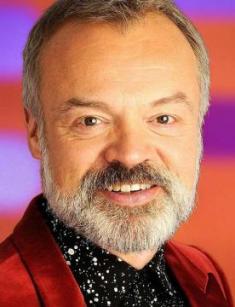 Irish comic actor, TV presenter and screenwriter Graham Norton is a five-time winner of the BAFTA Award, two-time winner of the British Comedy Award, as well as the holder of the title National Heritage of Britain. This man has been keeping the mood of the audience up with his unique sense of humor for decades.

The biography of Graham William Walker (the real name of Norton) started on April 4, 1963, in a little town of Clondalkin, Dublin, Ireland. His parents, Billy and Rhoda often liked to move from one place to another, and therefore, Graham had the opportunity to live in different parts of his homeland. The future comedian spent most of his childhood in the village of Bandon, County Cork. There he received a secondary education. Norton was an only child.

Upon reaching adulthood, the guy moved to one of the largest cities in Ireland – Cork, where he successfully passed the entrance exams to the local National University. However, his studies did not last long - only two academic terms. At the University, the student became interested in learning foreign languages – French and English.

After graduating from the University, the young man decided to move to the UK. Norton moved to London and attended the Central School of Speech and Drama, finally discovering the thing he found both challenging and rewarding, unlike anything he had tried before. Besides, Graham joined the British actors' union Equity and came up with a stage last name Norton (the young man's grandmother took part in creating this name).

Norton's career began on the British BBC Radio 4. His debut project was a morning show called Loose Ends, aired on Saturdays. The audience liked the talented performer from his very first show because of his open and cheerful nature.

After his first success, Graham immediately got another lucrative offer from executives from Channel 4. They launched a new talk show, which was entrusted to the young man. The program instantly became popular, and the audience began to admire the merry fellow. Thanks to his jokes and smile, they were charged with a good mood for the whole day.

The next stage in the creative biography of the TV presenter was cooperation with American TV-in 2004, a new show filmed in the United States, won over the hearts of the locals. And the following year, Norton signed a contract with the BBC and began to host his own program Graham Norton's Bigger Picture. In each episode, the man tried his best to keep the attention of the audience, talked about current issues, and came up with new jokes.

For two years (2007-2008), Graham Norton was the host of the Eurovision song contest in collaboration with the writer Debbie Barham, and in 2009 and later he worked as a commentator of the British version of the international song contest.

In February 2007, on the English version of the TV channel BBC One, the creators launched the project The Graham Norton Show. The studio of the comedy program invited film and music stars – directors, actors, singers, who talked about their career, personal life, vital social issues, etc.

The distinct feature of this talk show is unique funny comments of the comedian. The program, which ends with live musical performances, is relevant and loved by the audience to this day. The famous and recognizable bright studio in red tones was visited by such known actors as Benedict Cumberbatch, Tom Cruise, Hugh Jackman, Rami Malek, Jude Law, Korean pop group BTS, singer Rihanna, and many others. Dozens of seasons of The Graham Norton Show have already been released.

Since 1992, the comedian began to play in feature films. His debut work was the participation in the series Absolutely Fabulous of British production. Besides, the actor got a small cameo role in the motion pictures Never Mind the Buzzcocks, Eurotrash, Father Ted, and The Big Breakfast.

In 2006, Norton appeared in the comedy film Another Gay Movie directed by Todd Stephens, in which he got into the character of the cheerful Mr. Puckov. And a year later Norton appeared in the romantic drama comedy movie I Could Never Be Your Woman that starred Michelle Pfeiffer, Saoirse Ronan, Stacey Dash, and Paul Rudd. The film is about a woman named Rosie (Michelle Pfeiffer), who is going through a midlife crisis. During this period, she meets and falls in love with a young Adam, who turned the woman's life around. Graham's filmography includes many films.

Actor, TV presenter and comedian Graham Norton does not hide the details of his private life. He has repeatedly expressed that he is openly gay and supports the LGBT community. For a short time, his partner was the famous American writer Scott Mikols.

When the British comedian was 39 years old, he started having a love affair with the screenwriter and actor from California named Carl Austin. His boyfriend was also an open representative of the LGBT community. The two creative people soon broke up.

All his life Graham Norton has been struggling with an incurable skin disease called vitiligo (the pop King Michael Jackson was diagnosed with the same thing). When the host was 25 years old, he was attacked. At night, an unknown person stabbed him in the chest, but the injury was not life-threatening.

Graham Norton's approximate net worth is $ 30 million. The man is the owner of a sports car Lexus in beige color, the cost of which is $ 75 thousand.

In 2019, the man continues to be the permanent host of his talk show.

Now the next season of the Graham Norton Show is out on the screens in the United Kingdom. In it, the invited celebrities comment on their photos from social networks, talk about creative plans, perform tasks of the host and, of course, laugh a lot.