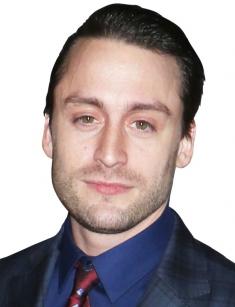 The younger brother of Macaulay Culkin, Kieran, began to star in films even before him. Macaulay first appeared on the screen at the age of eight, whereas Kieran made his debut at six. But it took him many years to gain real recognition and fame. Since 1998, after the roles in the films The Mighty and The Cider House Rules, Kieran Culkin becomes a more prominent figure in Hollywood. The actor confirmed his success, starring in the popular TV series Fargo and Succession.

Kieran Kyle Culkin was born on September 30, 1982, in New York, the United States. His father is a former Broadway actor Christopher Cornelius "Kit" Culkin, whose career was not very successful. His mother, Patricia Brentrup, worked as a telephone operator. The couple was not officially married, but it did not prevent them from having seven children. Kieran has four brothers, Christian, Macaulay, Rory and Shane, and three sisters, Quinn, Jennifer, and Dakota (died in 2008).

The boy didn't grow up in favorable conditions: a large family huddled in a small apartment in Manhattan and lived on a modest salary of the Church watchman –his father had to find employment there after leaving the theater. The only way out of the misery Christopher saw in the success of their children.

Out of the three older children, only Macaulay Culkin had an artistic gift, so his father began to sign him up for all kinds of auditions since he was three years old. And soon luck smiled at the father and son – Macaulay was approved to play in the American Christmas comedy film directed by Chris Columbus, Home Alone.

The fee of $100, 000 got in the head of his father, and he decided to promote his other children to act in this movie, and, luckily, the producers needed it: the on-screen family of McCallisters had five children. But out of all the young Culkins, the director picked out only six-year-old Kieran. He played Fuller, the youngest of the McCallisters: in the film, he wore big glasses and constantly drank "Pepsi."

Of course, the whole triumph of this film belonged to Macaulay. But for Kieran, it was the first step into the film industry as well. Before that, the little boy had only one dramatic role at the age of two. Kieran graduated from St. Joseph's School of Yorkville in New York and attended choreography classes at the School of American Ballet.

The second film for little Kieran was the famous comedy movie Father of the Bride starring such Hollywood actors as Steve Martin and Diane Keaton. They played his on-screen parents George and Nina Banks, who were preparing for a significant event, the wedding of their adorable eldest daughter Annie. Culkin played Matty Banks, and for this role, he got nominated for the prestigious Young Artist Award.

In the next two films, directed again by Chris Columbus, Kieran played together with his star brother once again. In the romantic comedy-drama film Only the Lonely (1991), the brothers played the roles of the nephews of the main character, Officer Daniel "Danny" Muldoon, (John Candy), Patrick and Billy. And then they gradually moved to the set of the family comedy Home Alone 2: Lost in New York (1992), the sequel to the legendary Home Alone of 1990.

Between these two works in 1991, the boy made his television debut with the role of Froggy in the American late-night live television variety show, Saturday Night Live (SNL). At the age of eleven, Culkin got a part in the action film Nowhere to Run (1993). The actor played Mike "Mookie" Anderson, the on-screen son of the actress Rosanna Arquette, who played a lonely widow living with two children on a remote farm. She sheltered a wanted robber Sam Gillen (Jean-Claude Van Damme), who helped her deal with the criminals who claimed her land.

After starring in the sequel to the comedy film Father of the Bride, in 1995, the actor took a small break and appeared on the big screen only in 1998, starring in the drama The Mighty, which brought him his first success. The character of Culkin is Kevin Dillon, a boy with disabilities, a small, skinny, but incredibly charismatic, intelligent and gifted child. Together with his mother Gwen (Sharon Stone), they move to one of the cities of the United States, and the boy goes to school.

But among the classmates, he faces cold and lack of understanding, the boys shout taunts in his address. Together with him another boy, Maxwell "Max" Kane gets bullied. He's the complete opposite of Kevin: he does not have a brilliant mind and finds it difficult to study, but he is big, tall, strong and kind. Two outcasts unite against the others. Now they are big, powerful and fair Mighty.

The incredibly sincere, warm and touching film was nominated for a number of prestigious film awards, including The Golden Globes. Kieran Culkin also received the nomination for Young Artist Awards as Best Performance in a Feature Film - Leading Young Actor. Then followed the role in the Oscar-winning film The Cider House Rules (1999), which was received very well by critics. From then on, Kieran was spoken of as a young star and an independent talent, without any reference to the name of his older brother.

In 2001, Kieran got his first major role on television, playing in five episodes of the youth series Go Fish about the life of a teenager Andy "Fish" Troutner. A year later the guy again got the leading part in the teen comedy-drama film Igby Goes Down(2002). In this picture, Culkin portrayed a wealthy man Igby, who was exhausted from his own family: an overbearing mother, an unstable father, and an obnoxious brother. Once again, they moved house and came to New York, where Igby met his soul mate, a girl named Sookie Sapperstein.

The Dangerous Lives of Altar Boys (2002), Lymelife (2008), Paper Man (2009), Margaret (2011), - all subsequent works of Culkin speak of his developing talent. In 2010, in the filmography of the guy appears a new film, Scott Pilgrim vs. the World, based on the graphic novel series Scott Pilgrim by Bryan Lee O'Malley. The film, complemented by a stylish soundtrack, turned out to be a breakthrough in his career and added a new army of fans to Culkin.

In 2013, Kieran starred in Peter Farrelly's anthology comedy film Movie 43, featuring fourteen different storylines, connected with each other by one plot. Despite the superstar cast (Uma Thurman, Kate Winslet, Hugh Jackman, Naomi Watts, and others), the film received negative reviews from critics and three Golden Raspberry Awards, mock booby prize awards given to the worst movies of the year.

The turning point in the biography of Culkin was 2015, when the actor appeared in the television series Fargo, inspired by the eponymous 1996 film written and directed by the Coen brothers. He played Rye Gerhardt, the younger son of the head of the criminal syndicate in the city of Fargo, who foolishly dies as a result of a car accident.

After this bright role, the actor was invited to the TV series Succession, which aired on HBO channel in the summer of 2018 and is now broadcast on television. The plot focuses on the family Logan Roy, the influential founder of media and entertainment conglomerate (his character is based on the story of the famous American businessman Keith Rupert Murdoch). He's getting old and will soon be forced to step down. Three brothers are fighting for the power in the media conglomerate, Connor (Alan Ruck), Kendall (Jeremy Strong) and Roman (Kieran Culkin).

"It’s therapeutic to say and do whatever because it’s my job and it’s written by somebody else. That’s what’s interesting and fun. These people are so … awful; he’s still an awful dude but playing him for a while there is something very interesting",-that is what the actor thinks about his character.

Kieran Culkin is clearly not one of those guys that advertise their personal life, because his biography is not full of numerous affairs, as befits a young, handsome, rich and famous man. It is only known that the actor was in a long-term relationship with the actress Emma Stone.

Nevertheless, another girl became Culkin's wife, Jazz Charton. She has nothing to do with the film industry.

Kieran met her in a bar; he just waited for the moment when her friend went to the bathroom and approached her. They left the place together and never parted again. The couple married in 2013. Both spouses actively lead Instagram accounts and post photos from every significant event of their lives.

In 2019, fans will watch the acting of Kieran Culkin in the television series Succession.

For his role in this project, he has already been nominated for the Golden Globe Award for Best Supporting Actor in the category Series, Miniseries or Television Film.