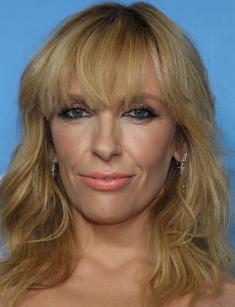 Australian Toni Collette is not only an actress of theater and cinema but also the lead singer of the band "Toni Collette & The Finish," where she performs together with her husband. Her performance in the television series United States of Tara was awarded two prestigious awards – the Emmy Award and a Golden Globe.

Toni Collette was born on November 1, 1972, in Sydney, Australia. Her father Bob Collette worked as a truck driver, her mother Judith Cook worked in the customer service. Toni is the eldest child in her family. She grew up with two brothers, Christopher and Ben.

She was engaged in acting since childhood: she faked an attack of appendicitis so skillfully that doctors believed and removed it when she was 11 years old, although the analyses did not show any danger. Toni first appeared on the stage as a teenager.

Collette did not doubt that to become an actress was her calling. She entered the National Institute of Dramatic Art the first time. She also took classes at the Australian Theatre for Young People. Toni dropped out her study for a role in a production of "Uncle Vanya" a year and a half.

Collette`s professional creative biography began with a small role in the series A Country Practice in 1990. She made her debut in the feature film The Specialist two years later. But Toni became famous after starring in the comedy film Muriel's Wedding in 1994. The actress recalls that it took her seven weeks to gain 39 feet (18 kg) for her role. Her performance was awarded for Best Actress by the Australian Film Institute.

She got her first role in Hollywood in the comedy The Pallbearer, which was released in 1996. She made her debut in England, performing a role in the film adaptation of the novel Jane Austen at the same time. In 1998, the actress played the wife of a rock star in the musical drama Velvet Goldmine, where she met with the actor Jonathan Rhys Meyers. They had a short affair.

In 1999, the famous director Peter Greenaway offered Toni a role in the film 8½ Women, where the Australian actress played the role of a nun, working in a brothel. The first blockbuster with the actress The Sixth Sense was released a few months later. Collette was nominated for the Oscar for Best Supporting Actress for her role of the mother of a boy with unusual abilities.

In 2000, Toni refused the offer to perform a main role in the comedy Bridget Jones’s Diary because of employment on Broadway in the musical The Wild Party. As you know, the image of Bridget became one of the most successful for Renée Zellweger.

In 2002, she appeared on the screen in the melodrama Changing Lanes with Ben Affleck. The film About a Boy was released at the same time, where Toni performed a single mother, for the image of which the actress was nominated for a Bafta Award. Collette receives another award from the Australian Film Institute for Best Actress for her role in the drama Japanese Story the following year.

In 2005, Toni and Cameron Diaz starred together in the tragicomedy In Her Shoes. The actress embodied the images of the opposite nature of the sisters. Collette performed the role of a mother from a dysfunctional family in the film Little Miss Sunshine the following year. The film was one of the most successful in her career as an actress: she received four nominations for the Oscars, good reviews, box office more than $ 100 million.

In 2008, the actress started acting in the TV series United States of Tara, where she worked for three seasons until 2011. She played the mother of two children, who suffers from a dissociative identity disorder while combining seven personalities.

In 2011, Toni first received a role in the horror film Fright Night and then starred in the drama Hitchcock. In 2013, Collette was invited to the series Hostages, where she turned into a brilliant surgeon, who was faced with a difficult life choice.

In 2014, Toni returned to Broadway after a 14-year break. She cut her long hair for the role in the film Miss You Already the same year.

She starred with Drew Barrymore. The actresses played inseparable childhood friends Jess and Milly. They had a crisis when the heroine of Toni finds out that she has cancer and Milly is pregnant.

In 2016, the actress starred with Daniel Radcliffe in the film Imperium and with Orlando Bloom, Michael Douglas, John Malkovich in the movie Unlocked a year later. The film Madame of the French director Amanda Sthers. The film is about the eternal theme of Cinderella: a servant from a rich house, who falls in love with an aristocrat.

It is not much known about Toni Collette's personal life: she had a relationship with the actor Jonathan Rhys Meyers after filming in the film Velvet Goldmine for about a year, where he played the main role. The couple broke up for unknown reasons.

In 2003, it was known that Collette married the musician Dave Galafassi. The wedding took place in Australia. The couple has two children: the daughter Sage Florence in 2008 and the son of Arlo Robert in 2011. Dave is a drummer in the band "Toni Collette & The Finish," where Toni is a vocalist at the moment.

In 2006, the band released their debut album and toured Australia. They acted as headliners at the Living Earth Festival. Also, Toni is not indifferent to animals; she is an active participant in the campaign, that protects the rights of animals PETA.

Toni is a successful actress, a loving wife and mother. There are more working photos, than personal photos: pictures from film sets, posters of future premieres on her official page on "Instagram". Toni Collette has a net worth of $18 million.

On June 7, 2018, a horror film Hereditary will be released on Russian screens, where Toni Collette played the main role of a woman, who has just buried her mother and lives in her house. The slogan of the movie is "every bloodline has its secrets".