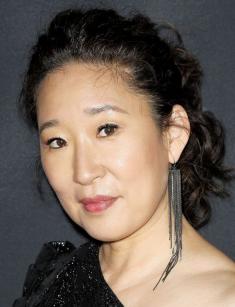 Sandra Oh is a Canadian actress of Korean origin, who gained wide popularity thanks to the role of Cristina Yang in the series Grey's Anatomy. The women starred in over 50 film and TV projects, including Killing Eve – a series based on the acclaimed detective novels of Luke Jennings.

Sandra Miju Oh was born on July 20, 1971, in a suburb of Ottawa, Nepean, in the family of a Korean immigrant businessman Junsu (John) and a biochemist Jeon Young-nam. Her parents moved to Canada from South Korea in the early 1960-is.

The future actress spent her childhood, surrounded by her brother Ray and sister Grace. Their work is not associated with creativity: Ray is involved in medical genetics and Grace is involved in law. The team hard took these kids because of their external differences, the family Oh one of the few non-European origins in Nepean.

At the age of 4, Sandra was given to classical ballet to correct the shape of the foot. The need to be engaged in the dance art became a desire and the girl had enough skill to play the main role in the musical The Canada Goose at the age of ten.

The girl received education at Sir Robert Borden High School. Sandra founded the environmental club BASE (Borden Active Students for the Environment) here, which raised the problem of using foam cups in cafeterias, which polluted the environment. Her active citizenship helped her to become the president of the student Council.

In her youth, Sandra continued to study ballet, although she realized that she was not good enough to become a professional dancer. She learned to play the flute, took acting lessons at the same time. The further biography of the Canadian shows what choice was correct.

Contrary to her parents ' advice, Sandra rejected a four-year journalism scholarship to Carleton University to study drama at the National Theatre School of Canada in Montreal, paying her way. Leaving her home, the girl promised that if she did not make her acting career, she would go to University. Sandra Oh is the only one in the family who does not have a master's degree.

Shortly after graduating from the National Theatre School in 1993, the Canadian played in the production of David Mamet's Oleanna on the stage of London, a city in the southwestern part of Ontario.

Sandra was lucky enough to play the role of two legendary Canadians of Chinese origin at the same time: the writer Evelyn Lau (Diary of Evelyn Lau) and the 26th Governor-General of Canada, journalist Adrienne Clarkson. More than a thousand actresses dreamed of playing Evelyn Lau but Oh received the role and won a Gemini Award for Best Performance by an Actress in a Leading Role in a Dramatic Program or Mini-Series.

In 1994, the film Double Happiness, in which Sandra Oh played the main role of 22-year-old Jade Li. She was brought up in a conservative Chinese family, for which the main thing is prosperity. Trying to please her parents and realize her dreams, Jade combines acting with work in the store. Her father, hurting his daughter, forcing her to fans, flexible Chinese guys. But Jade fell in love with Mark, an Englishman of Caucasian nationality. The image of the perfect daughter collapses from that moment.

The film received high critical acclaim. A journalist from "The New York Times" noted that "Jade becomes a witty heroine that you will not soon forget thanks to miss Oh." She was awarded Genie Awards for this role, the highest national film award of Canada.

From 1996 to 2002, Sandra Oh played in the series Arliss for six seasons. Her character – Rita Wu, the assistant of the president of the sports agency Arliss Michaels. She received the CableACE Award in cable television in 1997.

In 2003, Sandra played in the film Under the Tuscan Sun together with Diane Lane and appeared in the tragicomedy Sideways of Alexander Payne in 2004. The script of the latter was awarded the Oscar, a Golden Globe, awards of the British Academy of Film and others. Sandra's role was noted by awards of Screen Actors Guild and Boston Society of Film Critics.

The largest project in the filmography of the actress is the series Grey's Anatomy, which the woman devoted ten years from 2005 to 2014. Her character Cristina Yang is a cardiothoracic surgeon. The girl decided to become a doctor after the tragic death of her father.

The actress remained in the project together with Ellen Pompeo, Chandra Wilson, Justin Chambers, Patrick Dempsey but she decided to leave the project until the start of the 10th season, in August 2013. Grey's Anatomy brought Sandra Oh a Golden Globe, the Screen Actors Guild and five nominations for the Emmy Awards. The series continues to be filmed now.

Sandra was engaged in voice acting: Mulan II (2004), The Land Before Time XIII: The Wisdom of Friends (2007), Phineas and Ferb (2008). In 2006, she starred in The Night Listener with Robin Williams, in Defendor with Woody Harrelson in the title role, in Rabbit Hole with Nicole Kidman, in Tammy in 2014.

In April 2018, there was a premiere of the series Killing Eve. Sandra Oh plays the role of Eve Polastri, who hunts for a hired killer Villanelle performed by Jodie Comer. The project is based on the novels Villanelle of Luke Jennings. Sandra Oh became the first Asian, who was nominated for an Emmy Award for Best Dramatic Actress thanks to her role in the series.

January 1, 2003, Sandra Oh married the director of the film Sideways, Alexander Payne. The couple looked happy in the photos from the red carpet and the premiere but the husband and wife announced about their breakup in early 2005 and divorced officially at the end of 2006. They do not say the reason for their quarrel.

In 2007, Sandra had a boyfriend Andrew Featherstone, the drummer of the band the Hereafter. According to reports from the press, it is known that the coquple is still together but they do not think about their marriage. They do not make any official statements about their relations.

In the spring of 2019, there will be the premiere of the 2nd season of Killing Eve. Also, among the projects, which are planned for future years is the film The Goree Girls. Sandra Oh has a net worth of $25 million.

The plot tells the story of eight prisoners, who create a country group. Their music becomes so popular that girls are released from prison ahead of time. Jennifer Aniston, Sandra's colleague in Grey's Anatomy, Ellen Pompeo, Jennifer Landon confirmed their participation in the film.