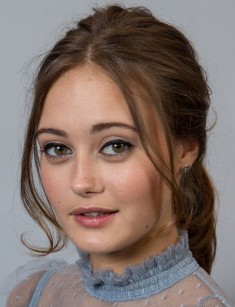 Young British film star Ella Purnell is called the new muse of Hollywood director Tim Burton. Critics predict her a bright future in the "dream factory," but the actress prefers the theater. Ella is also a Dior house model.

The actress and model was born in London in 1996. She spent her childhood and youth in Britain’s capital and began an acting career there. The parents of the future star broke up when Ella was not even ten years old. Each of them married again. Her father had three sons in the new family. Her mother, a yoga teacher, married the owner of a sports club.

Ella Purnell studied at Forest School, a private school that was located on the edge of Epping Forest, the oldest forest in Britain, which was included in the lists of sites of special scientific interest. At the school where Purnell studied, children were taught to respect nature. Later, Ella transferred to the prestigious City of London School for Girls, known for its ancient history and impeccable reputation.

Ella Purnell showed her acting skills early. At the age of nine, the girl began to play on the school stage, and at the age of 12, she outperformed hundreds of candidates for a role in the musical play Oliver!, based on the novel “Oliver Twist” by Charles Dickens. The musical was staged at the Theatre Royal, Drury Lane in London for a year. During this time, Ella Purnell felt like an actress and gained her first acting experience. The girl realized that she was not dreaming about another profession, and began to improve her skills at Sylvia Young Theatre School. Ella attended the scenic speech and dance lessons, studied music and signing.

Ella Purnell made her film debut in 2010. The very first movie brought her success, and she made it into the world of cinema. The 13-year-old actress starred in the anti-utopia drama Never Let Me Go shot by American director Mark Romanek. Keira Knightley played the title character of Ruth. Ella portrayed young Ruth.

The film was not a box office success but received positive reviews from film critics. Expert Roger Ebert rated the film four stars, which is the highest mark. Ella Purnell became famous overnight. Since then directors have always paid attention to the young actress. The same year, the girl appeared in the film Ways to Live Forever, based on the novel by Sally Nicholls, who became famous for her profound psychological studies.

The following year, Purnell starred in the movie Intruders and the short film Candy. The horror film Intruders was shot in London and Madrid. Clive Owen got a leading role. After the release of the film, Ella Purnell was named by Screen International as one of 10 UK Stars of Tomorrow.

In 2013, Ella Purnell was invited to play in the action-comedy Kick-Ass 2. The 17-year-old girl played a heroine named Dolce in the black comedy, where Aaron Taylor-Johnson and Chloë Grace Moretz portrayed the title characters.

In 2014 the actress got a role in the fantasy film Maleficent, the remake of the Disney fairy tale Sleeping Beauty. Angelina Jolie became its co-producer. The Hollywood star, who got the title character of Maleficent in the project, chose Ella Purnell to portray her young heroine.

When the girl left the hospital after an appendectomy, she was afraid for the skin integrity and was not good for height, because in the story young Maleficent flew over the ground. But she left her fears behind, and the honor to work with Angelina Jolie inspired the young British woman. The movie, which premiered in Hollywood on March 28, 2014 (every other day in Russia), received mixed reviews.

The same year, the film Wildlike was released, in which Ella played wayward MacKenzie. Purnell won the LAIFF Award and several other awards for her work in the adventure film. But the British woman who has achieved world recognition in cinema has admitted to journalists that she dreams of returning to the theatre stage, and cinema is of secondary importance for her.

In 2016, the world of Hollywood cinema did not let the young star go. Ella Purnell starred in David Yates's action movie The Legend of Tarzan and Tim Burton’s fairy tale film Miss Peregrine's Home for Peculiar Children. Ella appeared together with the famous actors Asa Butterfield and Eva Green. Purnell portrayed Emma Bloom, a girl who can manipulate air. Ella Purnell said in an interview that but for Asa Butterfield, she would have never graduated from a high school. They prepared for the exams together at the insistence of diligent Butterfield.

Fans of fantasy films and the creativity of the eminent director highly appreciated Burton's film masterpiece. They saw Ella as a blond girl who looked like an angel, although her thick sole boots made a dissonance. They helped the heroine not to fly into the air. Ella Purnell said in an interview with Vogue that her relatives made fun of her, claiming that playing young heroines is Ella's role. But the actress denies that Emma Bloom in Burton’s film continued a series of familiar children's images because the heroine is 112 years old. She looks like a child, but she looks at the world and thinks like a sage.

On the set of the film, Ella Purnell had to fly ten meters above the ground, and the staff used special cables to hang the actress. But the girl overcame the fear of height, acting in Maleficent. The same year, the actress appeared in the biopic The Journey is the Destination, which tells the story of a 22-year-old photojournalist, Dan Eldon, an Englishman who was beaten to death in Somalia.

The participation of Ella Purnell in Hollywood projects, shooting in Maleficent and Miss Peregrine's Home for Peculiar Children attracted the attention of viewers to the British star. So, the actress has an impressive army of fans. On the Instagram page, Purnell has 262,000 subscribers who are closely following the news of her personal life and career.

The graceful and beautiful lady (Ella's height is 160 cm, and the weight is 44 kilograms) with expressive brown eyes has a lot of fans. In 2016, the British debuted as a model of Gucci and Dior brands. Purnell is a talented actress and many-sided personality. She plays the piano and saxophone, speaks French and Spanish, has organized a fund to help children and teenagers through a crisis, does charity work. The actress fences and plays tennis.

After the release of Tim Burton’s project, there were rumors about Ella Purnell and Asa Butterfield’s love affair. The actor helped the girl to prepare for the final exams, and they spent a lot of time together. However, the celebrities say that they have friendly relationship.

In 2017, the woman appeared on the screen again to the delight of a vast army of fans. She starred in the biopic Churchill and the teen road trip film Access All Areas. In 2017, viewers wait for the premiere of the American drama UFO directed by Ryan Eslinger, in which Ella Purnell got a leading role.

The personal life of the actress remains in the spotlight. The media representatives talk about Ella’s love affair with Tom Holland, the star of the fantasy action movie Spider-Man: Homecoming. The couple attracted the attention of the paparazzi at the 2017 BAFTA Film Awards ceremony, where Holland won an award. Ella and Tom left the celebration together. Thus rumors spread that the actors were dating. But the British stars insist that they are just friends.

In 2017, Ella Purnell appeared in glossy magazines. She accepted an offer from Dior and attended the launch of Dior Cruise Collection. The British woman speaks highly of the brand's clothes but claims that she doesn't like dressing up and is indifferent to luxurious dresses in everyday life. Ella prefers jeans and athletic pants and does not want to discuss her appearance. 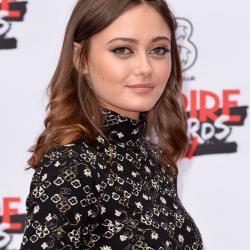