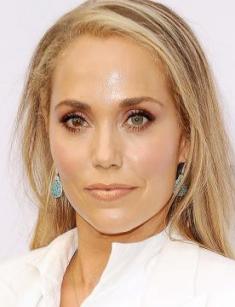 The American model and actress, Elizabeth Berkley, became famous for her role of a stripper in the sensational movie Showgirls, released in the mid-90s. At the same time, the career was almost in jeopardy because the woman was dropped by the agent, and other agencies did not even want to talk to her. Critics and fans of the talented woman point out that this is the only serious character that she managed to portray. Most of the movies with Elizabeth are comedies, in which she mainly got small roles.

Elizabeth was born in Michigan in a wealthy family. Her father, Fred, was a lawyer, and her mother, Jere, ran a small gift basket business. The girl spent her childhood in the affluent suburb of Detroit. The parents tried to give the daughter a good education, so they enrolled her in a private school.

From a young age, the girl was fond of ballet. The father and mother supported Elizabeth in this regard; they arranged a dance room in the basement of their house. The future actress dreamed of fame; at the age of 10, she auditioned for the film Annie but was turned down. After that, she plunged into dancing, hoping that it would bring fame.

Young Elizabeth left her parents' house and moved to New York City. There she was warmly welcomed by choreographers, who offered her the roles in ballets and musicals, but life had other plans.

Elizabeth Berkley began a modeling career thanks to her attractive appearance and body measurements (she is 5.84 ft. (178 cm) tall, weighing 130.07 lbs. (59 kg)). The woman also has a unique feature because she was born with heterochromia; her eye is half green and half brown. The pretty blonde worked at the Elite model agency in the USA.

By the end of the 80s, Berkley finally got on the television screen, but at first, she landed bit parts in TV series. In 1987 she appeared in David Grossman’s fantasy comedy Frog, which she considered to be the beginning of her acting career.

Soon the young woman was invited to the auditions of the TV sitcom Saved by the Bell. The creators of the movie could not choose the actress for the role of Kelly Kapowski. Tiffani-Amber Thiessen also auditioned for this character and eventually landed this role.

But the producers did not want to part with Berkley. In the end, they created a character for her. For four years, Elizabeth played a witty women’s rights activist, Jessie Spano.

Elizabeth was swamped by a wave of viewers’ love; thousands of fans sent her letters. Nevertheless, the actress was upset by negative criticism, and the agent refused to cooperate with her. Berkley decided that she should choose scripts more carefully. Directors also noticed the woman’s talent and began to invite her to their projects. One year later, Berkley already worked on the film The First Wives Club, which featured such Hollywood stars as Diane Keaton, Goldie Hawn, and Bette Midler.

The filmography of the actress included independent movies, in which she cooperated with outstanding actors. Director Oliver Stone invited Elizabeth to play the role of a prostitute in the drama Any Given Sunday, starring Al Pacino, Cameron Diaz, Jamie Foxx. In 2001, she joined the cast of Woody Allen's romantic comedy The Curse of the Jade Scorpion. The actress landed prominent roles in the movies Tail Lights Fade, Taxman, and Roger Dodger.

She did not turn down roles in TV series. Elizabeth starred in the TV show of the 2000s: Titus, The Twilight Zone, Student Seduction, Law & Order: Criminal Intent.

The actress has also built a theater career. In 2004, she debuted on Broadway. Critics appreciated her acting and talent in the comedy Sly Fox and the play Hurlyburly.

Although the actress has got a lot of roles in the 2010s, she could not repeat the success of Showgirls. Only a few projects are worthy of attention. Elizabeth appeared in the comedy series The L Word, Melissa & Joey, the movie Women in Trouble.

She did not forget about her childhood hobby. Berkley tried her hand at hosting the reality show Step It Up and Dance, and in 2013 she participated in Dancing with the Stars. Her partner in the dance show was Valentin Chmerkovskiy, a choreographer of Ukrainian ancestry.

Elizabeth Berkley launched her TV project entitled Ask-Elizabeth, which purpose was to help teen girls. The actress traveled across the United States and met young girls, with whom she discussed important topics.

The actress met her future husband, Greg Lauren, at dance classes. The man is a versatile person. He is an artist, sculptor, and actor, known for his roles in the films Batman Forever, The Wedding Planner. Greg followed in the footsteps of his uncle, fashion designer Ralph Lauren. He also started his own clothing line.

In 2003, the couple got married. The wedding took place in a luxurious Mexican hotel, and all the guests wore suits and dresses designed by Ralph Lauren. The couple did not have children for a long time; only nine years later, fans learned that Elizabeth was pregnant. In 2012, a son, Sky Cole, was born in the family. The young mother even had a brief career break.

The woman is happy to share the details of her life with Instagram followers. She often posts photos with her son and husband.

47-year-old Elizabeth Berkley is still slim. The woman said in an interview that she did not go on an extreme diet; she liked snacking on fruits and vegetables. Besides, the actress is a vegetarian and animal rights activist. In the late 90s, Elizabeth participated in a campaign and wore a cabbage dress for a photo shoot.

Berkley is a philanthropist who does charity work. She supports the Pediatric AIDS Foundation and helps older people.

In 2016, Elizabeth joined the cast of the comedy television series New Girl, revealing the secrets of the relationship between men and women. The actress portrayed a character named Becky Cavatappi. The creators decided to renew the project for the second season, which would premiere in 2018.

Berkley heads the production company, 5,6,7,8 Productions, promotes projects in the field of art and business.

Elizabeth Berkley has a net worth of $6 million.